Wave Central has been entrenched in high-end wireless broadcast and camera technology for quite some time. From venues across North America, the company has emphasized the importance of creating quality products that can seamlessly integrate with 4K studio cameras, along with cultivating long-lasting business relationships with customers. At NAB 2019 last week, Anthony Sangiovanni, EVP, Wave Central, discussed how the company’s customer-first philosophy produces tailored and unique results, recent updates to its lineup of transmitters, and a new partnership in the world of sports.

What new products are being showcased that cater to the sports-video–production community?

We’re showing a typical setup that would be used within the sports-production truck. As a company, we are format- and manufacturer-agnostic because we deal with every manufacturer, such as Sony, Panasonic, and Ikegami. We offer integrated solutions for model-specific cameras. [Since we’ve progressed], we can now do 4K. In the case of what we did with Grass Valley [in customizing a transmitter around an empty shell of an LDX camera] and what we’re going to do with Sony and other companies as they come along, we can get four 3G [signals] off this camera head to [produce] 4K, HDR, and HFR.

As of April 1, we are the distributor/partner of DTC Broadcast in the Americas. Not only do we sell the things that we make, but now we’ll be in an exclusive partnership with DTC. We have the availability to their complete portfolio of products and other technologies. One of the products is spatial channel optimization (SCO). With this [item], we can pass timecode tables, LUTs [lookup tables], and timecode flags, but we’re still compressed. So we do the exact same thing as [other companies] do, but we can go two miles away. For example, I have a transmitter at the Panasonic booth, which is 1,500-2,000 ft. away. It’s cutting through all of the other RF [transmission] that’s in the middle.

The other product is the mesh network. With this network, operators are able to talk to each other [with the help of a bidirectional radio]. [Also], I can fill it up with whatever I want: audio, video, IP, and telemetry. As I put each node out, I expand, and, as I ingress into one radio, [the user] is in the network. One of the first products that we’ll be making with this is a beltpack that has two antennas for phenomenal range.

Has Wave Central been involved in any recent sports projects?

Teams — [notably] the Baltimore Ravens and the Chicago Bears — have used the [custom Sony] 2500. It’s a model-specific thing they asked us to do, so we integrated it. For the Oakland Athletics and Raiders, we had to take an empty shell from the Grass Valley LDX and build [a transmitter] into the back. During the Vegas Golden Knights Stanley Cup run last year, we added a second system and more antennas, so there are two antennas on the outside [of the camera]. Even though we had eight inputs to the receiver, we came up with switching that, while they’re using the outside antennas, [and, when they walk inside to the arena], they click over to another set. Everything is seamless. 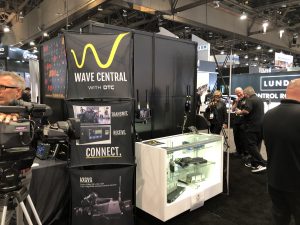 Wave Central has partnered with both DTC Broadcast and the UFC to expand their RF horizons.

More recently, we just signed up with the UFC. They never had a good experience with wireless [connectivity]. We did a live demonstration with them last month in Wichita, KS [at Fight Night 146 in Intrust Bank Arena on March 9].

I brought my system on board and [showed it] to Tre James [director, live event production, UFC]. We were doing [live] hits before they would come in from the locker room. We would walk with [the fighters] on the same set of antennas from the locker room, through backstage, out into the arena, [and to the octagon] with not a single glitch throughout the entire night.

We’re now developing an adaptive flypack system for them because, one week, they’re on the road doing a fight and then they’re back in the [Las Vegas] facility. They will ship the flypack out, do a show at the arena, and then send it back to their permanently mounted antennas in the facility. We’re going to continue to work with them because, this year, they’re going to be using a [Sony] HDC-P50 and a 1500, but next year, they’ll go to a different system.

How does your team’s philosophy differentiate your work from other companies’?
The key thing about our company is that we offer custom solutions. We have a core configuration, but we tailor it to each and every venue or facility that we work with. COFDM, the traditional microwave that we use, can be used in different kinds of applications. We believe that the first mile should be air, but, after that, users can do whatever they like to get to their infrastructure. We’re here to make it happen with a reliable piece of technology. Our goal is to exceed the customer’s expectations.