As the main audience, the athletes have taken notice of content on the videoboard

Although Major League Baseball is continuing with a 60-game regular season, the pulse of what makes professional baseball exciting will remain at home. In the midst of the ongoing COVID-19 pandemic, 30 in-venue departments are forging ahead with operations inside empty stadiums. SVG’s At the Ballpark series will take you behind the control-room door and examine what it’s like to produce a fan-less venue experience in 2020.

The main objective of baseball is to always keep your eye on the white, 5-oz. sphere covered in leather and 108 red stitches. When the ball isn’t in play and without fans at Citi Field to take players’ attention away from the game between pitches, those on the field are being attracted to another source of stimuli in deep centerfield. That’s where Joe Devito, executive producer, content and marketing, New York Mets, and his staff come in.

MORE AT THE BALLPARK INTERVIEWS:

“The players really enjoy the replays,” he says. “They depend on these replays to see where they did or didn’t do well. They have been on par with where it would normally be if there were fans in the stands.”

Video has forever changed the way athletes consume information and fine-tune their craft, but, although a big chunk of video is used for analysis, the crew in the control room are doing more for players than showing the location of a pitch, mechanics of a swing, and result of a recent plate appearance. 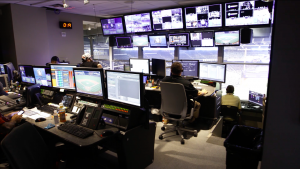 The New York Mets’ in-venue team is adapting to a new way of production in 2020.

“We still play our hype video when the team takes the field and rally videos when we’re going into the later innings,” says DeVito. “We’re also playing a lot of songs and other music as well.”

In normal circumstances, this content would generate a roar from the crowd and get fans on their feet. Unfortunately, with cardboard cutouts of fans in the seats, one of the main purposes for this material is to enliven and motivate batters before they step to the plate or pitchers before they take the mound. It’s also a rare chance to give them a brief moment of relaxation in a game rooted in adversity.

“We’d like to think that that gives the players a little juice and pumps them up a little bit before performing,” DeVito adds. “When we look down [at the field] and see them looking up at the board to watch and enjoy, we understand that we were the ones that gave them that content and that moment.”

Despite delivering levity and creativity, it’s not all fun and games for crew members producing an in-venue show. Since there is no in-person attendance, trivia games and other fan-engagement opportunities aren’t written into the show rundown. In addition, a lot of sponsorship messaging from paying customers is eliminated. To fulfill contractual obligations, it has become a tandem effort to integrate these companies into visual elements included on the television broadcast and the organization’s social-media channels.

Crew members are required to wear face coverings inside the control room.

“There are a couple of things that we’ve retained from previous years that we’d play inside of the ballpark,” DeVito explains. “We’re echoing these messages onto our social-media platforms and sometimes in conjunction with our RSN, SportsNet New York, like our ‘Veteran of the Game’.”

Although many things have changed, DeVito and company want to maintain certain in-venue staples that incorporate valued partners and honor a large fanbase of the franchise. “Military veterans are a big part of our organization,” he notes. “It has been very important to the Mets to honor them. We’re still trying our best to create that sense of normalcy.”

In this unique season, the Mets are limiting access to the control room and other production facilities to essential personnel. Like most in the live-production industry, remote workflows are still being used to ensure that crew members offsite can still complete tasks from their respective homes. Onsite and inside Citi Field every day and night, though, the production cannot be done by DeVito alone.

Without fans in the stands, videoboard graphics are catching the attention of players on the field.

“There’s nothing that I could possibly do without all of these folks,” he says. “From marketing and production to social media and creative services, everyone has been unbelievable throughout this season so far.”

One person in particular, Senior Director Vito Vitiello, worked his 28th Opening Day in late July, and, after nearly three decades with the Mets, the production veteran called it a career on Friday, Aug. 7. Despite the loss, it’s a chance for others in the department to fill other roles and continue the admirable work being done in Flushing.

The New York Mets return to Citi Field for a three-game edition of the Subway Series against the New York Yankees, starting Friday, Aug. 21 at 7:10 p.m. ET.