MLB Network will make some history tonight. The MLB Tonight on-air team will call the action between the Chicago Cubs and Milwaukee Brewers, and the production will offer two-box live look-ins, studio demos, and more. According to Dave Patterson, SVP, Production, MLB Network, the network has been discussing the format for a while. 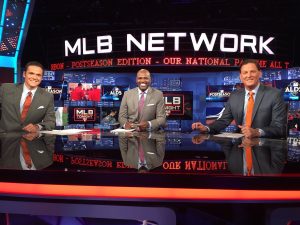 From left: Greg Amsinger, Harold Reynolds, and Dan Plesac will be at the center of tonight’s MLB Network broadcast of the Milwaukee Brewers and Chicago Cubs.

“On Friday],” he says, “we will make live look-ins part of the coverage by showing the game between the Cubs and Brewers and showing [in a two-box] some of the good matchups going on outside of that game. We’re very excited and [talent] Greg Amsinger, Dan Plesac, and Harold Reynolds are the perfect guys to pull it off.”

To MLB Tonight Coordinating Producer Chris Roenbeck, the biggest challenge will be making sure the spontaneous updates and live look-ins that are part of every MLB Tonight broadcast mix well with the coverage of the Cubs-Brewers game.

“We are definitely pumped,” he says. “I feel like I am cramming for a midterm as I am learning how to do a Showcase and also incorporate MLB Tonight elements. Our talks leading up to the game are about how to strike that balance.”

Each of the three announcers at the helm of MLB Tonight brings something different to the show, and those differences will be highlighted tonight.

“We have all kinds of breakdown videos from Harold,” Roenbeck explains. “Greg brings the creative stuff and is the creative engine as he shows up with five or six different ideas. And then Dan provides a different energy, and I look forward to seeing how he will dive into how a pitcher may approach a batter. He is great with play-by-play in the background, so the format is right in his wheelhouse.”

During live look-ins, the broadcast will shift to a two-box, and Roenbeck notes that it will be challenging to make sure viewers who tune in just to watch the Brewers and Cubs aren’t jarred by too many two-boxes.

“We need to cherry-pick those spots,” he says. “We don’t want to do a live look-in during a double-play situation or with two outs as we could get caught [for a commercial break]. And there are tons of sales elements we have to cram in; we want to make sure and get those done right.”

Patterson will be looking at the other games for key at-bats and moments worthy of a live look-in. In addition, the team at MLB Tonight will also make use of Studio 42 for breakdowns.

“It’s one of the best sports studios there is,” says Roenbeck. “So we are excited to incorporate that into the broadcast.”

Adds Patterson, “If it’s a good fit, it is certainly something we would like to try again. We’re really excited about it, and, if it works out well, we have enough room in the regular-season calendar to try it again.”

Tonight’s game caps off a week when the network has produced three different game-broadcast formats. On Aug. 10, they produced a traditional broadcast, but yesterday’s afternoon game between the New York Mets and Washington Nationals featured enhanced Statcast measurements.

“We’ve done Statcast games before, and they are a great way to showcase Brian Kenny,” says Patterson. Kenny was joined by Cliff Floyd, MLB.com writer Sarah Langs, MLB Network Insider John Heyman, and various Statcast experts who were tied remotely into the production.

According to Marty Montalto, co-ordinating producer of Thursday’s Statcast, the goal is to leave aside some of the broadcaster clichés and give a true analytical focus to the action. “We dig into the game strategy of key at-bats and pitching changes and then give some analytical context that some MLB viewers are not familiar with.”

There is no one better on the planet at articulating the world of analytics than Kenny, Montalto adds: “He lays the foundation so that we don’t hit people over the head with stats that make their eyes glaze over. Even when we show a Statcast metric, we will put a traditional metric like batting average up to give some context.”

One of the challenges with in-depth statistical analysis is that often the answers will create more questions. Offering a stat that creates understanding without opening the door to more confusion makes things like Kenny’s essays that were broadcast during the game important.

“He looks at something around the game and has analytical discussions with a guest or two,” says Montalto. “You want to give the viewer an extra reason to be interested in the game or offer something that brings in a new viewer who normally wouldn’t tune in.”

The efforts at MLB Network are all part of a return to normalcy that includes new ways to produce events and appeal to viewers.

“We just love to have games, and viewers are really appreciative of that,” says Patterson. “But they are also more sophisticated and can take in more than one thing. We have a 60-game season, and we are cramming a lot into it at a breakneck pace.”