3-D for the One-Eyed

Like the earliest movies, early TV was silent.  And the late, great television director Kirk Browning drove an ambulance during World War II.  Believe it or not, this post is about 3-D TV.

Sound seems inseparable from video today, but ’twasn’t ever thus.  Writing in the Proceedings of the IRE [the Institute of Radio Engineers] late in 1929, Julius Weinberger, Theodore A. Smith, and George Rodwin, urging standardization of the new medium, considered audio something that might be added only at some future date. “Besides the television signal,” they wrote, “there may be located in the band a synchronizing signal, and, conceivably, later on, the speech or music signal accompanying the picture.”

By the time the world’s first TV broadcast standard was approved (in the UK) in 1937, sound was included.  Color brought TV closer still to reality.  So did high definition.  Surround sound? Closer still.

There have been attempts to go even further, with tactile and olfactory stimulation, for example. And then there’s 3-D.

Even the world’s best lip reader can’t identify an off-screen sound. The color of a dress can’t be determined from a black-&-white picture. But is stereoscopic 3-D needed for depth perception?

Kirk Browning was modest to a fault. He sometimes attributed his success as a television director to effective blindness in one eye, thus seeing the world the way a video screen portrayed it. But he also drove those ambulances in World War II.

Depth perception seems a prerequisite to driving, even in wartime.  But we don’t need two working eyes to perceive depth.

Have a look at the playing cards at the left.  It’s pretty easy to tell which is on top.  The spade is covering the club, which appears to be covering the diamond.  When something blocks the view of something else, the blocker must be closer.

That’s just one of more than a dozen visual mechanisms human beings use to determine depth, even when they use only one eye.  A big-looking cow is close; a tiny-looking cow is far away.  Can you see individual corn stalks?  Then you’re close to them.  When the cornfield seems a green space, you’re far away.

Viewing Leonardo’s Mona Lisa, most people concentrate on the woman and her enigmatic smile, but how about what’s going on in the background?  Notice how the distant mountains are hazier and bluer than the closer terrain.  That happens in real life, too.  Leonardo called the effect sfumato, yet another visual mechanism we use to determine depth.

Most of the ways we determine depth work not only for one eye but even for flat, still, black-&-white photographs.  But video isn’t static.  A moving camera offers “motion parallax,” one of the best depth-perception mechanisms, and can actually see around objects, something that even stereoscopic 3-D doesn’t offer viewers.

So 3-D doesn’t move TV any closer to reality.  But that’s not the point.

If TV producers sought reality, they’d never use make-up, sets, or lighting.  One camera and microphone, located in the desired viewing position, would suffice.  No show would use graphics or music.

Video cameras used for such purposes as surveillance and telemedicine might need to deal with reality; TV deals with tricks and gimmicks, and if stereoscopic 3-D draws larger audiences or more loyal ones it’s something worth considering.  But that’s a big “if.” 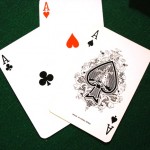 Good 3-D is not trivial to achieve, getting it to work on different-sized screens is harder still, and, even after all that, there are psychophysical issues that might make viewers uncomfortable.  I hope to get to those in future posts.

Meanwhile, keep an open mind and remember that things aren’t always what they seem.  The bottom card, for example, wasn’t a diamond after all.