I’ve been writing about 3D image capture for more than 35 years.  I’ve covered side-by-side and beam-splitter rigs, parallel and toed-in lenses, integrated cameras, single-lens stereo, integral imaging, 3D illusions, and holography.  But I’ve not — until now — covered anything like Frontniche’s VC-3100 HD, made by V3i. 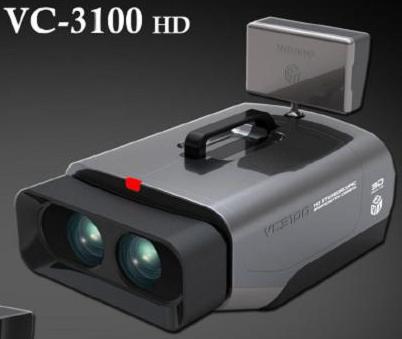 It’s an integrated 3D camera being introduced at the International Broadcasting Convention in Amsterdam tomorrow.  It uses dual 3-chip 2/3-inch-format 2.2-megapixel CCD sensors and has dual 18 x 7.6 mm lenses with synchronized zoom, focus, and iris functions.  It has a 7-inch viewfinder.  It even has a tally light.  In other words, ignoring its 3D aspect, it’s like a typical broadcast HD camera (with a twin attached). 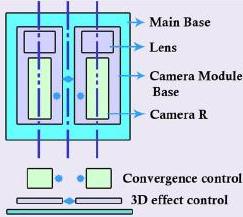 It is, however, a 3D camera, but unlike any other.  Its image sensors (the prism optical blocks with chips attached) move horizontally.

Frontniche makes many claims for the camera, which it calls “the world’s first all-in-one ortho-stereoscopic broadcast camera.”  Among them are a “maximum 3D effect distance” of 360 meters, more than enough to shoot one football goalpost from behind the other.  It’s also said to comply with Japan’s “Stereoscopic Image Safe Standard” law.

You can read more about it in the product brochure, from which these images were taken: http://frontniche.co.uk/pdf/Full-Broadcast-3D-HD-Camera.pdf 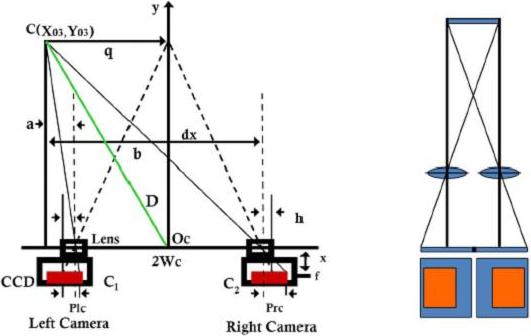 The brochure includes links to sites covering the theory of moving-sensor 3D and issues of sports shooting.  I plan to give the unit a good look at IBC.