There was plenty of 3D at the International Broadcasting Convention (IBC) in Amsterdam this year.  At the awards ceremony, alone, the audience was frequently asked to don 3D glasses to see clips from the winners (before viewing a portion of the not-yet-released 3D movie Tron: Legacy).  But the first sentence of the first comment posted on the question “What did you see around at IBC2010?” posted on the LinkedIn Digital TV Professionals Group was “Lots of 3DTV Demos that nobody was looking at” (from Alticast senior vp Anthony Smith-Chaigneau), and two other group members quickly agreed. 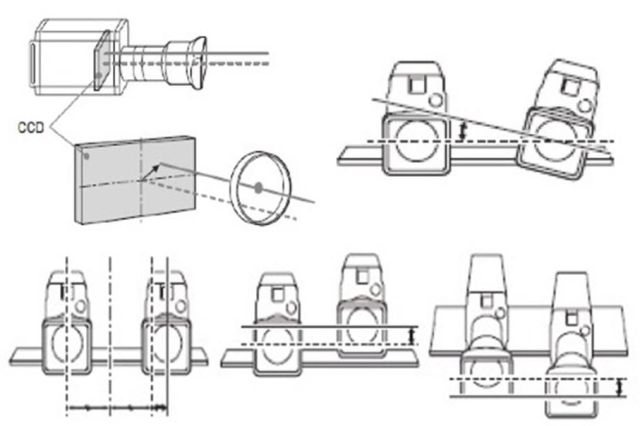 In fact, some of the 3D demos were very viewed, including the ones in Sony’s exhibit, based largely around their MPE200 processor.  Introduced at NAB in April, the MPE200 was then capable primarily of correcting stereoscopic camera-alignment errors, as shown above.  It has become so popular that one announcement of Sony 3D equipment sales at the show (to Presteigne Charter) included 13 MPE200 processors but only 10 HDC1500R cameras (with two required per 3D rig).

rigs are said to be so precise that correction is not necessary.  Although some had seen it previously, 3ality’s small, relatively lightweight TS-5 rig (shown at left) was officially introduced at IBC 2010.  Zepar introduced an even-smaller stereoscopic lens system (shown at right) for a single camera, reducing the need for correction.  Such 3D-lens systems normally raise concerns of resolution and sensitivity loss, but Zepar’s is intended to be mounted on the Vision Research Phantom 65, which has plenty of each.

At IBC 2010, however, Sony’s MPE200 was no longer just a correction box; three more functions were introduced.  One is 2D-to-3D upconversion.  Sony was not alone in that area, either.  One new competitor is SterGen, an Israel-based company with a system intended specifically for sports.  According to their web site (http://www.stergen.tv/), they offer “better quality than real 3D shooting.” 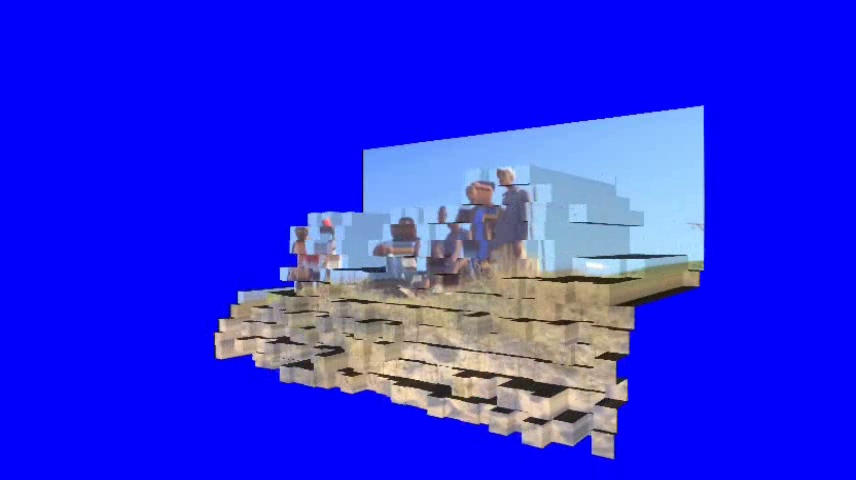 Then there’s graphics insertion.  In that new function, the MPE200 was joined by Screen Subtitling’s 3DITOR, which analyzes not only the depth characteristics of the current frame but also the depth history.  Above, one of the depth-measurement tools is shown (based on an image from Wild Ocean, ©2010 Yes/No Productions Ltd and Giant Screen Films).  The company offers a white paper on the myriad issues of 3D text: http://www.screen.subtitling.com/downloads/Safe%20graphic%20insertion%20for%20stereographic%20material.pdf

Another new MPE200 function is stitching, the ability to combine pictures from multiple cameras into one big panorama and then derive a stereoscopic camera image from a portion of the result.  The European research lab imec had shown a stereoscopic virtual camera at NAB in April (and brought it to IBC, too: http://www2.imec.be/be_en/press/in-the-picture/ivc-at-ibc-amsterdam.html), and BBC R&D described a system even earlier (http://www.bbc.co.uk/rd/publications/whitepaper180.shtml). 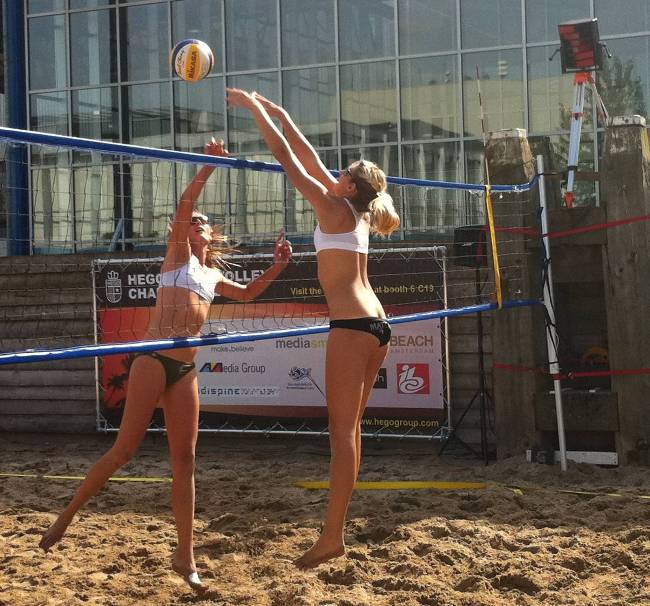 Much of the interest in stitching at IBC 2010, however, was unrelated to 3D.  It was associated, instead, with the Hego OB1 system, which uses a package of six cameras in one location to create the panorama.  It won awards from Broadcast Engineering and TVBEurope magazines.  Certainly, the system uses interesting technology, but so does Sony’s MPE200.  Perhaps Hego’s winning the awards had something to do with how the OB1 was demonstrated, with bikini-clad beach-volleyball players on the IBC Beach, as shown above in a portion of a photo by Wes Plate (http://wes.plate.net/).  That’s the camera array at the upper right. 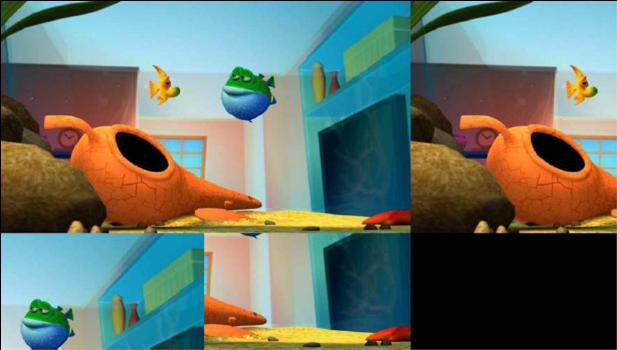 In fact, there was plenty new at the show that was not 3D.  There was more 3D, of course.  In the area of distribution, Dolby pushed its version of 3D encoding and Sisvel brought a new “tile” format, shown above with an image from Maga Animation.  The left-eye view occupies a 1280 x 720 portion of the 1920 x 1080 frame, allowing it to be extracted for 2D HD viewing without necessarily changing existing decoders.

There were new 3D analyzers from Binocle (DisparityTagger) and Cel-Soft (Cel-Scope).  There was an iPhone/iPod app from Dashwood Cinema Solutions for stereoscopic calculations associated with Panasonic’s 3DA1 camcorder.  There was the Vision 3 camera with toe-in-free convergence that I wrote about just before the show (http://schubincafe.com/blog/2010/09/3d-camera-something-different/).  There were glasses-free displays (one noting that its correct viewing distance was 4.4 meters).  There was a seven-camera 3D rig for capturing information for such displays.  There was a book about stereoscopic cinematography from 1905.  There was an eye-tracking 3D laser-display system.

That was just in the exhibits.  There were also plenty of 3D conference sessions.  IBC’s best-paper award went to a group from NDS for their paper “Does size matter? The challenges when scaling stereoscopic 3D content,” which showed that not only does apparent depth change with different screen sizes, but it also doesn’t scale.  And stereographer Kommer Kleijn punched holes in “religious” views of toe-in vs. parallel shooting in a presentation about stereoscopic shooting for people experienced in 2D.

Actually, in addition to 2D and 3D, IBC 2010 also had 4D.  It was in a small exhibit in a low-traffic hall.  The full title was Real-Sense 4D, from ETRI, the Korean Electronics and Telecommunications Research Institute. 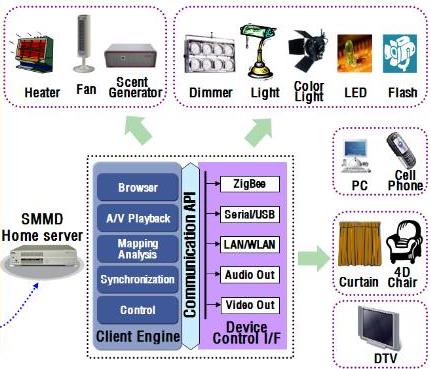 As shown above, Real-Sense 4D involves more than just an image display.  I tried it out.  When the story involved a fire, I not only saw the flames and heard them crackling but also felt the heat and smelled the smoke.  During a segment on ice skating, I felt the air rushing past and then, in a moment out of Nancy Kerrigan’s career, felt a sudden WHAP! on my legs. 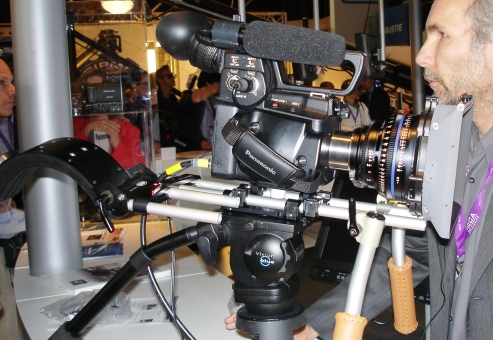 As at many recent professional equipment exhibitions, there was also 5D, specifically the Canon Eos 5D Mark II DSLR camera, capable of shooting HD.  But there was also something characterized by David Fox in the IBC Daily as “the HD DSLR Killer.”  It was Panasonic’s AG-AF100/101 (above), shown only in a display case at the NAB show earlier this year.  It combines the advantages of a large-size image sensor (Micro Four Thirds format) with the features of a video camcorder.  At IBC, there were many operating units, and the reaction of the IBC press corps was wildly enthusiastic about them, much more so than to Panasonic’s 3DA1 camcorder.

Whereas at IBC 2009 some 25 new camera models were introduced, at IBC 2010, besides the V3i stereoscopic camera and the AF100/101, the main introductions were Canon’s XF100 and XF105 camcorders and IDT’s palm-sized, 2K, high-speed NR5.  There were also compact versions of NHK’s 8K Super Hi-Vision cameras from Hitachi and Ikegami.  But there were significant wide-angle lens introductions from Polecam (HRO69, at left) and Theia (MY125) for 1/3-inch-format cameras, offering horizontal acceptance angles of 69 and 125 degrees, respectively. 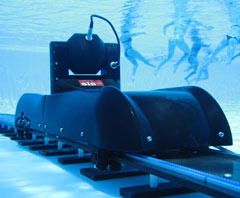 There were also introductions in the camera-mount area, such as Bradley Engineering’s multi-axis Gyro 350 (similar looking to the older Axsys V14 but said to be lower in cost), Vinten’s encoding Vector 750i pan head, and SiSLive’s Halibut underwater track.  Vaddio’s Reveal wall-mounted camera systems are invisible until used.  Broadcast Solutions showed a tiny two-seat Smart car equipped as a five-camera studio.  That’s not merely the control equipment; the five cameras were mounted in the car.

Other acquistion-related introductions at IBC included a video whiteboard system from Vaddio that does not require a computer, a version of Sennheiser’s MKE-1 lavalier microphone in which every part, from cable to connector to windscreen, is paintable to precisely match costume color, and a wireless tally system from Brick House Video.  Capable of dealing with up to eight cameras, the Tally Ho! handles both on-air and preview/iso tally, and the charger for the tally modules doubles as the system  transmitter.

If IBC 2010 wasn’t about new cameras, it did offer many new introductions in storage and distribution.  There was, for example, AJA’s new, small, lightweight, camera-mountable Ki Pro Mini (left).  Then there was the even smaller and lighter Atomos Ninja (right), intended specifically for use with certain types of cameras.  And Cinedeck Extreme v. 2.0 allows direct use of Avid’s DNxHD codec.  Sonnet’s Qio MR brings the ability to play essentially all popular types of camcorder flash cards (including Panasonic’s P2 and Sony’s SxS) to Windows-based tower computers.

Then there were transportable systems, bigger than those above but still usable in the field.  One was the Globalstor Extremestor Transport.  Comparably sized but serving a very different function was Marvin (left), from Marvin Technologies.  It accepts almost any form of field recording and then, according to preselected options, automatically makes copies, including archival tape cartridges and DVD screening copies. 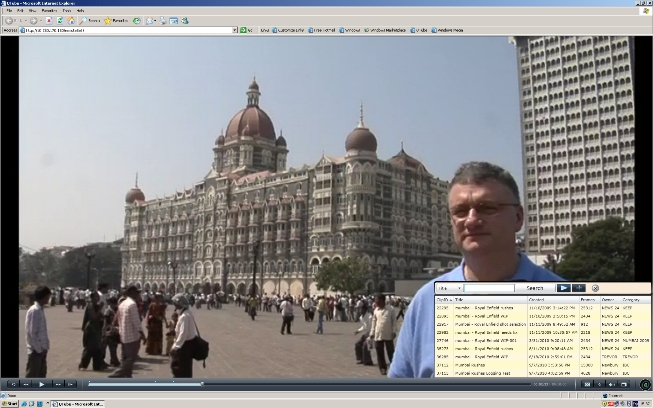 There was much more at IBC.  Cloud-based editing (an Internet Explorer screen from Quantel’s QTube is shown above), a new acoustic summing algorithm, a multi-touch video wall — and those were just some of the items in the public exhibits.  In private rooms, one could find such items as TiVo’s integration of YouTube and Sony’s 24-inch OLED and terabyte memory card. 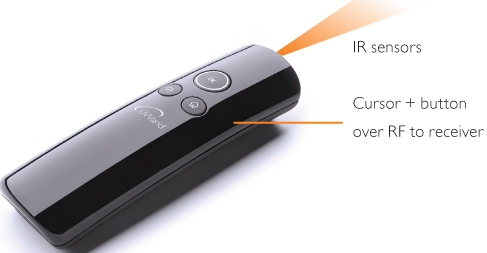 IBC clearly isn’t just about broadcasting anymore.  For more of my take on IBC 2010, see the Power Point from the Schubin Cafe IBC review on October 12, available here: http://schubincafe.com/blog/2010/10/ibc-2010-review-powerpoint-presentation/