The laugh-getting tag line for Garrison Keillor’s weekly Lake Wobegon stories is that “all of the children are above average.” It’s funny because it’s impossible. So, too, with 3D; not everything can be a first.

I happen to have studied in depth the intersecting histories of media technology and the art form known as opera. Included in those histories is stereoscopic 3D.

When Philip Glass’s opera Monsters of Grace premiered in 1998, it featured a stereoscopic backdrop, and the audience wore 3D glasses to view it. At left is what appears to be the classic image of a cinema audience watching a 3D movie. But look closely at that audience.

The reason they look more like an opera audience than a movie audience is that they are an opera audience; they are watching Monsters of Grace in Los Angeles. The picture at left appears in this review: http://www.cyberstage.org/archive/cstage31/editorial.html

This year, there was a similar 3D production of the opera The Magic Flute at the University of Houston. Coverage, as in this example, where the photo at right appeared, appropriately mentioned the earlier Monsters of Grace: http://culturemap.com/newsdetail/01-27-11-3d-glasses-for-the-opera-moores-puts-the-star-wars-into-magic-flute/. Neither opera was transmitted anywhere in 3D. 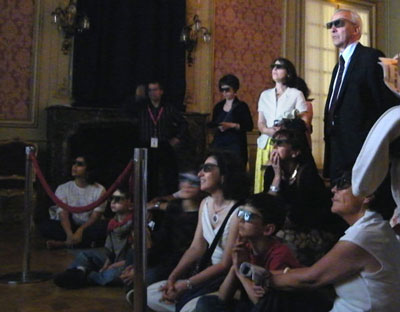 Last November, the opera Faust was transmitted live in 3D from Stockholm’s Folkoperan. It, too, went to multiple cinemas.

Later this month, the English National Opera’s production of Lucrezia Borgia will be transmitted live in 3D. And, next month, a Carmen previously shot in 3D at London’s Royal Opera House will be shown in movie theaters.  Both are being promoted as “the first 3D opera”: http://www.guardian.co.uk/stage/2011/jan/08/eno-sky-first-live-3d-opera; http://www.operatoday.com/content/2010/06/first_opera_in_.php