The annual Tech Retreat of the Hollywood Post Alliance (HPA) is where many new technologies get introduced. Sony reportedly “introduced” its F65 camera and SR-memory technologies at this year’s exhibition of the National Association of Broadcasters (NAB) in Las Vegas in April; more than a year earlier, both were described for HPA Tech Retreat attendees. Panasonic’s Varicam and Sony’s HDCAM SR are just two of the other technologies that were introduced at previous HPA Tech Retreats.

Stereoscopic 3D (S3D) is no exception. The 2011 retreat, last February, saw the introduction of the SRI stereoscopic test pattern (below) and a SoliDDD multiview autostereoscopic display, among many other demos, and a presentation from Germany’s RheinMain University of Applied Sciences showed actual measured crosstalk (ghosting) for many commercial S3D systems, with names named. The 2012 retreat coming up in February is expected to feature an S3D lens adapter for use in almost any PL-mount system and binocular-vision Royal Society Research Fellow Jenny Read, who has degrees in astrophysics, neuroscience, and psychology.

So, is S3D the next big thing in home entertainment? Here’s what appeared in The New York Times: “…this week, a special study group of experts on stereoscopic television is meeting in Washington to try to decide which system should be adopted. Should the group reach agreement, the system it endorses would be proposed to the International Telecommunications Union, which is considering adopting a global standard for 3-D television.”

Yes, that appeared in The New York Times, in an article headlined “3-D TV Thrives Outside the U.S.”

It appeared on April 22.

One might think those broadcasts were simply of movies that used color filters (anaglyph) to separate the left- and right-eye views. They weren’t. Color TV was almost nonexistent at the time. Instead, the S3D TV broadcasts that began in 1953 used side-by-side images with a polarizing screen placed over the picture-tube faceplate and prismatic polarized glasses (right) for viewing. And even those weren’t the first S3D television broadcasts.

The 1930 book Fundamentals of Television, by Thomas Benson, begins its section on S3D with the following sentence. “There are, of course, several possible methods of accomplishing stereoscopic television.” The author could be so definitive not only because John Logie Baird had already broadcast S3D television in 1928 (the receiver, with stereoscope viewing device, is shown at left) but also because of the many patents that covered it, such Georges Valensi’s number 577,762 in France in 1922.

If S3D television was first broadcast more than 80 years ago (and was discussed even earlier), why should it be considered the next big thing now? There are some good reasons.

Tiny image sensors now allow side-by-side stereoscopic video acquisition (and that lens adapter at the upcoming HPA Tech Retreat could expand that capability to even more cameras). Digital correction processing now allows differences between image pairs to be changed in production or post.  There are now systems for automatic stereoscopic alignment.  And entropy-based bit-rate-reduction (digital compression) systems now allow two eye views to be recorded or transmitted in much less than twice the rate of a single view.

Then there are display systems. Most modern S3D cinemas use a system involving circularly polarized viewing glasses, with an optical “plate” in front of the projector to switch polarization as appropriate between the alternating left-eye and right-eye views. The system is being suggested for home TVs, too.

Above is a figure from a U.S. patent that covers the polarization-rotation plate system for such S3D viewing. The patent is number 4,541,691, issued to Thomas S. Buzak of Beaverton, Oregon. Some might recognize that location as the headquarters of the test-&-measurement company Tektronix, and, indeed the patent was assigned to them. It was applied for in 1983 and issued in 1985, at a time when Tektronix was in the video-image display business, largely using picture tubes, as can be seen at the left side of another figure (below) from the patent. Tektronix described and demonstrated the system with both direct-view (home TV-type) and projected (cinema-type) displays starting in 1984. 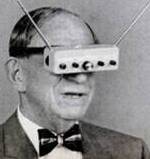 Perhaps the most-advanced form of S3D eyewear is individual goggles with built-in picture displays. They’re not exactly a new idea, either, as this portion of an image (left) from the March 1949 issue of Radio-Electronics magazine shows. The diagonal lines are “rabbit-ears” antennas. In this case, idea is an appropriate description.

Some say any form of glasses is the bane of S3D, especially in homes. They prefer some form of autostereoscopic display, an S3D display that can be viewed without glasses (or other intervention between viewer and screen). 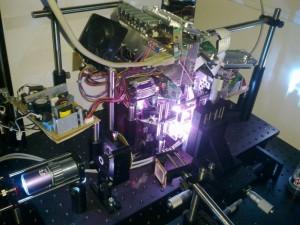 There have been some major developments in this technology recently. If you’ve seen Mission Impossible – Ghost Protocol, you saw a theoretical eye-tracking autostereoscopic display screen intended to fool a guard. The illusion, unfortunately, gets destroyed when more guards show up, and the system can’t figure out whose eyes to track, causing shifting images.

If, however, you had attended Ian Sexton’s presentation on advanced autostereoscopic displays in the panel “Tomorrow’s 3D: A Glimpse from Today” at 3D World in New York in October, you’d have seen that tracking the eyes of multiple viewers is not really a problem. The prototypical light engine of the European HELIUM3D (High-Efficiency Laser-based multI-User Multu-modal 3D Display) project he described is shown above right.

Of course, HELIUM3D was by no means the first multi-viewer autostereoscopic display. At left (click for a larger view) is the parallax-barrier grid being applied to the screen of a cinema in Moscow prior to its showing of a glasses-free 3D movie, Concert, in February 1941 (right). Glasses-free “Stereo Kino” auditoriums later opened in other cities in and influenced by the Soviet Union.

All S3D viewing-control mechanisms (the ones used to ensure that the appropriate view goes to the correct eye) have historic origins. In the photo of the 1928 S3D TV receiver above, the viewing-control mechanism can be seen to be a Holmes-type prismatic-lensed stereoscope, dating to the mid-19th century. The use of the word anaglyph to describe colored glasses dates to a French S3D-movie system in 1893. Projection of S3D images onto a metallic screen so as to allow the use of polarized glasses dates back at least to 1891.

Perhaps the most popular current form of home S3D TV uses shutter glasses that allow the eyes to see the screen alternately as the different views are displayed. Such shutters require synchronization to the display, usually accomplished through infra-red signaling. Are they, at least, a recent innovation? 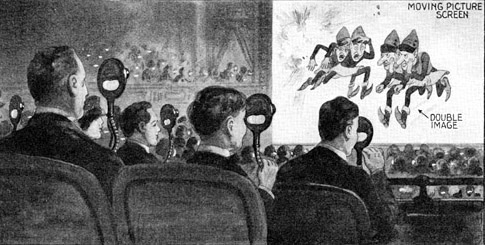 The Teleview system (above) premiered at a New York cinema in 1922 (showing an S3D science-fiction movie with special effects). As can be seen from the illustration, each audience member had an individual viewing device. The device was a rapid, synchronized, view-alternating shutter, as shown at left (click on the image for a larger view). But even that wasn’t the earliest active-shutter 3D-viewing system. The recent SMPTE book 3D Cinema and Television Technology: The First 100 Years, edited by Michael D. Smith, Peter Lude, and Bill Hogan, with introductions by Ray Zone, begins with a 1919 paper by the Society’s founder indicating that shutter-based viewing systems were already well known by that date.

Indeed they were! Above is a portion of a drawing from British patent 711, issued March 23, 1853 to Antoine Claudet. The mechanism at the top right shuttled the sliding shutter bar at the top left back and forth so that a viewer looking into the eyepieces shown at the bottom would see the appropriate view in the appropriate eye.

That was probably the earliest form of S3D shuttering, but it wasn’t the earliest S3D photographic motion-picture patent. The latter (but earlier) achievement belongs to Jules Duboscq, an instrument maker who was head of special effects at the Paris Opera. He got that post by creating an electric-light sunrise effect there in 1849, thirty years before Edison’s light-bulb demonstration. To achieve the effect, he had to create not only the illumination system but also a power source for it. Nature magazine later praised his development of a means of precipitating the toxic fumes from the batteries used, so as not to poison the patrons of the opera. 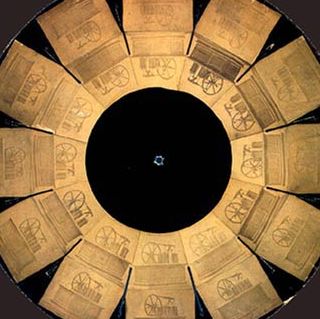 On November 12, 1852, in an addendum to his French patent 13,069, he described a “stéréofantascope” or “bioscope,” an S3D movie system. Coincidentally, the patent addendum describes the first photographic movie system, years before even Eadweard Muybridge’s work.

There is a surviving Duboscq Bioscope S3D motion-picture disc (shown at left, click to enlarge) at the Museum of the History of Science at the University of Ghent, Belgium. It has 12 stereo pairs of sequential albumen photographic prints of a steam engine.

Given that we are rapidly approaching the 160th anniversary of S3D moving-image viewing, it might be hard to think of S3D as the next big thing. On the other hand, tomorrow is another year.