Bang for the Buck

Something extraordinary happened shortly after noon local time on Saturday, September 14, at the International Broadcasting Convention (IBC) in Amsterdam (aside from the fact that the fresh herring vendors were no longer wearing traditional klederdracht). It could affect at least the short-term future of television. And a possible long-term future was also revealed at the event. IBC, however, featured not only the extraordinary but also the cute.

For many years, there seemed to be an unofficial contest to show the largest and smallest television vehicles. The “largest” title seems to have been won (and retired) at IBC 2007 by Euroscena’s MPC34, a three-truck, expanded, interconnected system including everything from a sizable production studio through edit

suites, at least as wide as it was long; nothing exhibited since has come anywhere close. The “smallest” went from trucks to vans to tiny Smart cars to motorcycles to Segways. In an era in which a hand-held camera can stream directly to the world, it’s hard to claim a “smallest” title with a vehicle, so perhaps Mobile Viewpoint’s tiny scooters (click image to enlarge) should be considered among the cutest, rather than the smallest. 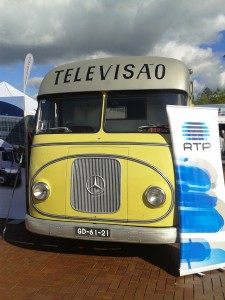 Not far from those Mobile Viewpoint scooters, however, was another claimant for the “cutest” title, though it was neither new nor particularly small. In the BTS outdoor exhibit was Portuguese television broadcaster RTP’s first mobile unit, built by Fernseh GmbH (roughly translated: Television, Inc.) in an eight-meter-long Mercedes-Benz truck delivered to Lisbon in 1957. It did its first live broadcast the following February 9, continued in service through 1980, and was restored in 2006 (though it still has a top speed of only 76 kilometers per hour, about 47 MPH).

About a quarter of the length of the 1957 RTP mobile unit — more than devoted to its control room — is occupied by multi-core camera-cable reels for the vehicle’s four cameras. Cabling is one area in which video technology has advanced tremendously in the last 56 years — except for one characteristic. Consider some products of another small IBC 2013 exhibitor, NuMedia.

In television’s early days, there were separate cables for video and sync, eventually becoming one in composite video. Color required multiple cables again; composite color brought it back to one. Digital video initially used a parallel interface of multiple wires, the serial digital interface (SDI) made digital video even easier to connect than analog, because a single coaxial connection could carry video, multi-channel audio, and other data. Then modern high definition arrived.

SDI carried 270 million bits per second (Mbps); HD-SDI was about 1.5 billion (Gbps). HD-SDI still used just one coaxial-cable connection, but usable cable lengths, due to the higher data rates, plunged. NuMedia offered a list of usable lengths for different cables, ranging from 330 meters for fat and heavy RG11 coax down to just 90 meters for a lighter, skinnier version. NuMedia’s HDX series uses encoders and decoders to more than double usable cable lengths (and offer a reverse audio path) — at a cost of more than $1800 per encoder/decoder pair. And that provides some background for the extraordinary event.

IBC hosted a conference session called “The Great Quality Debate: Do We Really Need to Go Beyond HD?” Although going “beyond HD” has included such concepts as a wider color gamut (WCG), higher dynamic range (HDR, the range between the brightest and darkest parts of the image), higher frame rates (HFR), stereoscopic 3D (S3D), and more-immersive sound, the debate focused primarily on a literal reading of HD, meaning that going beyond it would be going to the next level of spatial detail, with twice the fineness of HD’s resolution in both the horizontal and vertical directions.

The audience in the Forum, IBC’s largest conference venue, was polled before the debate started and was roughly evenly split between feeling the need for more definition and not. Then moderator Dr. William Cooper of informitv began the debate. On the “need” side were Andy Quested, head of technology for BBC HD & UHDTV; vision scientist Dr. Sean McCarthy, fellow of the technical staff at Arris; and Dr. Giles Wilson, head of the TV compression business at Ericsson. On the “no-need” side were Rory Sutherland, vice chair of the Ogilvy Group (speaking remotely from London); journalist Raymond Snoddy; and I.

The “need” side covered the immersive nature of giant screens with higher definition and their increased sensations of reality and presence (“being there”). Perhaps surprisingly, the “no-need” side also acknowledged the eventual inevitability of ever higher definition — both sides, for example, referred to so-called “16k,” images with eight times the spatial detail of today’s 1080-line HDTV in both the horizontal and vertical directions (64 times more picture elements or pixels). But the “no-need” side added the issue of “bang for the buck.” 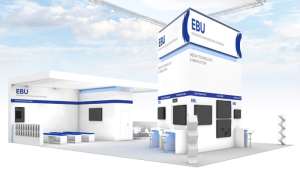 At the European Broadcasting Union (EBU) exhibit on the show floor, some of that bang was presented in lectures about the plan for implementing UHDTV (ultra-HDTV, encompassing WCG, HDR, HFR, immersive sound, etc.). UHDTV-1 has a spatial resolution commonly called “4k,” with four times the number of spatial pixels of 1080-line HDTV. As revealed at the HPA Tech Retreat in February, EBU testing with a 56-inch screen viewed at a typical home screen-to-eye distance of 2.7 meters showed roughly a half-grade improvement in perceived image quality for the source material used. 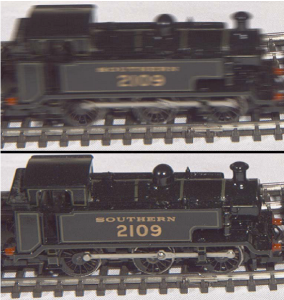 At the EBU’s IBC lectures, the results of viewer HFR testing were also revealed. Going from 60 frames per second (fps) to 120, doubling the pixels per second, yielded a full grade quality improvement for the sequences tested. In terms of data rate, that’s four times the bang for the buck of “4k” or “4K” (the EBU emphasized that the latter is actually a designation for a temperature near absolute zero).

IBC attendees could see for themselves the perceptual effects of HFR at the EBU exhibit or, even more easily, at a BBC exhibit in IBC’s Future Zone. Even from outside that exhibit hall, the difference between the images on two small monitors, one HFR and one not, was obvious to all observers.

The EBU hasn’t yet released perceptual-quality measurements associated with HDR, but HDR involves an even lower data-rate increase: just 50% to go from eight bits to twelve. If my personal experience with HDR displays at Dolby private demonstrations at both NAB and IBC is any indication, that small data-rate increase might provide the biggest bang-for-the-buck of all (although Pinguin Ingenieurbüro’s relatively low-data-rate immersive sound system in the Future Zone was also very impressive).

At IBC’s Future Zone, the University of Warwick showed HDR capture using two cameras, with parallax correction. Behind a black curtain at its exhibit, ARRI publicly showed HDR images from just one of its Alexa cameras on side-by-side “4k” and higher-dynamic-range HD monitors. Even someone who had previously announced that “4k” monitors offer the best-looking HD pictures had to admit that the HDR HD monitor looked much sharper than the “4k.”

HDR is contrast-ratio-related, and, before cameras, processing, and displays, lenses help determine contrast ratio. Sports and concerts typically use long-zoom-range lenses, which don’t yet exist for “4k.” A Fujinon “4k” 3:1 wide-angle zoom lens costs almost twice as much as the same manufacturer’s 50:1 HD sports lens. Stick an HD lens on a “4k” camera, however, and the contrast ratio of the finest detail gets reduced — LDR instead of HDR. 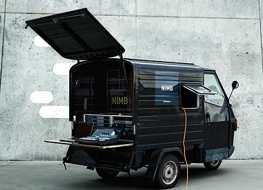 Then there are those cables. As in the change from SDI to HD-SDI, as data rate increases, useful cable length decreases. Going from 1080i to “4k” at the same number of images per second is an increase of 8:1 (so-called 6G-SDI can handle “4k” up to only 30 progressive frames per second). Going from 60 fps to 120 is another 2:1 increase. Going from non-HDR to HDR is another 1.5:1 increase, a total of 24:1, not counting WCG, immersive sound, or stereoscopic 3D (a few exhibits at IBC even showed new technology for the last). Nevertheless, Denmark’s NIMB showed a tiny, three-wheel multicamera “4k” production vehicle, perhaps initiating a new contest for largest and smallest.

The lens and cable issues were raised by the “no-need” side at “The Great Quality Debate” at IBC. Perhaps some in the audience considered this conundrum: “spending” so much data rate on “4k” might actually preclude such lower-data-rate improvements as HFR and HDR. Whatever the cause, when the audience was polled after the debate, it was no longer evenly split; at an event where seemingly almost every exhibit said something about “4k,” the majority in the audience now opposed the proposition that there is a need to go beyond high definition: 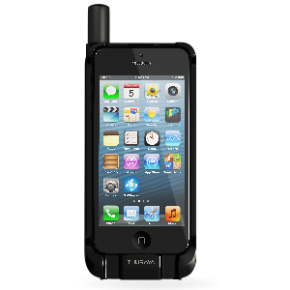 Perhaps a secondary theme of IBC 2013 (after “4k”) will be more significant in the long term: signal distribution. IBC has long covered all forms of distribution; in 2013 offerings ranged from broadcast transmitters in just two rack units (Onetastic) to a sleeve that turns an iPhone into a satellite phone (Thuraya). In the Future Zone, Technische Universität Braunschweig offered one of the most-sensible distribution plans for putting live mass-appeal programming on mobile devices, an overlay of a tower-based broadcast over regular LTE cells.

The most radical signal-distribution plan at IBC 2013, however, was also the one most likely to be the future of the television-production business. It’s related to HD-SDI: eliminating it. HD-SDI technology is mature and works fine (up to the distance limit for the data rate and cable), but it’s unique to our industry. Meanwhile, the rest of the world is using common information technology (IT) and internet protocol (IP).

The EBU “village” was a good place to get up to speed on replacing SDI with IT, with both lectures and demonstrations, the latter, from the BBC, showing both HD and “4k.” Here are links to EBU and BBC sites on the subject:

Then there was SVS Broadcast, which took information technology a step further, showing what they called an IT-based switcher. The control surface is a little unusual, but what’s behind it is more unusual. When a facility uses multiple switchers, they can share processing power. Oh, and the control surfaces demonstrated at IBC in Amsterdam were actually controlling switcher electronics in Frankfurt.

There were more wonders at IBC, from Panasonic 64×9 images to

MidworldPro’s Panocam that uses 16 lenses to see everything and stitch it all into a single image. And then there was Clear-Com, offering respite from the relentless march of advanced technology with their new RS-700 series, an updated version of traditional, analog, wired, belt-pack intercom.