When Will We Convert to HDTV?

A few weeks ago I worked on an event television production in New Jersey. Last week I was at the HPA Tech Retreat in California. Yesterday I attended Panasonic’s pre-NAB press conference in New York. What do the three have in common? They made me wonder when we will make the transition to HDTV. That’s right: HDTV, not “4K” or any other form of beyond-HD television.

The event was called Ode to Joy, a concert at Princeton University’s Richardson Auditorium celebrating the 100th birthday of philanthropist and musical scholar William H. Scheide. It was shot in HDTV, which has a picture shape or aspect ratio, worldwide, of 16 units wide to 9 units high, 16:9, wider than the old TV aspect ratio of 12:9 or 4:3.

The producers released an eight-minute, behind-the-scenes, promotional video, which I recommend highly to anyone who wants to see some of what’s involved in such productions, from running cables through the snow in sub-zero temperatures to going over the music and shots with the camera people before the concert. Here’s a link to it: http://www.youtube.com/watch?v=3awcZ_dPHQU

In addition to its YouTube release, the promo was shown on a number of public television stations. I watched one, via cable television, at a friend’s house. No setting of the friend’s TV or cable box allowed me to see the promo as was intended, filling the 16:9 HDTV screen; the sides were chopped off, at either the station or the cable system, back to old TV’s 4:3.

Such chopping is why some broadcasters still want their content configured in “shoot-and-protect” mode, shot to fill the 16:9 frame but with important content and graphics protected to

be visible in what remains after the sides of the HDTV image are chopped off. Maybe shoot-and-protect made sense in the early days of HDTV, when most viewers watched narrower screens; today it can mean most viewers watching stretched out, unnatural pictures as they try to fill their widescreen TVs with chopped-off images.

I know that it’s most viewers because I follow and report on surveys of television households in the U.S. One of the places where I do such reports is at the annual HPA Tech Retreat. 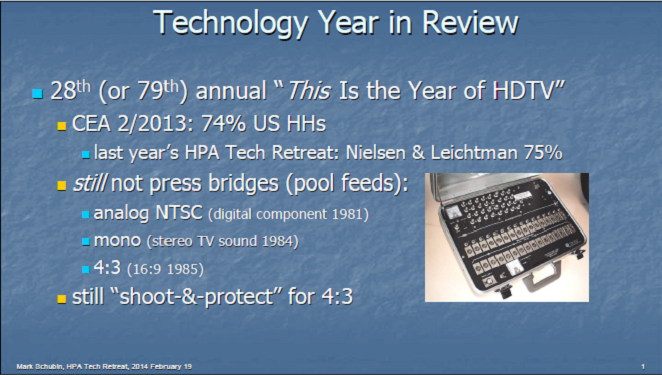 Above is the opening slide of the “Technology Year in Review” that I present there (you can get the whole presentation on the “Get the Download” section of this site here: http://www.schubincafe.com/2014/02/27/hpa-2014-technology-year-in-review/). For many years, I’ve been running essentially the same slide, just tweaking the numbers a bit. This year I noted that the Consumer Electronics Association, Leichtman, and Nielsen all agreed that, as of the beginning of 2013, about ¾ of U.S. television households had HDTVs. That’s most.

So, while shoot-and-protect is preventing a minority of viewers from losing important information at the sides of the picture, it is fostering an environment in which the majority of viewers is watching content in the wrong shape and/or, as in the case of my viewing of the broadcast of the Ode to Joy promo, losing important content at the sides. And that’s not the only problem.

Ode to Joy was an event. That’s the type of television show on which I work most often. And events are often newsworthy. Often the event producer will invite members of the press to cover it. When that happens, part of my job is providing the radio and television press with the feeds they need. 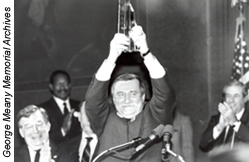 For a live transmission, that can be as simple as delivering satellite coordinates or authorizing a carrier to feed a station. Most newsworthy events also require some form of “press bridge,” audio and video distribution amplifiers and connectors. A 32-output press bridge is shown in the image in the slide above. The most I’ve ever fed was about 175 when Solidarity-leader Lech Wałesa spoke at the AFL-CIO convention in 1989 in Washington, D.C. I’d prepared for only 150, so some press daisy-chained off of others.

For most of the analog television era, such daisy-chaining was relatively easy. Video was 4:3 standard-definition NTSC color on a coaxial cable with a BNC. Audio was monaural and used a XL-type connection. Press bridges often had switches to deal with the biggest issue, such as whether the audio desired was to be line level or mic level; those press needing mic level usually brought their own attenuators, just in case. 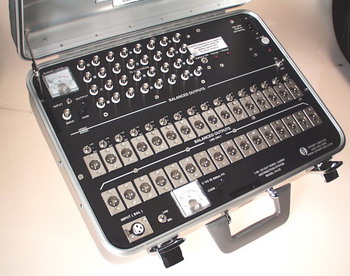 Today, in the supposed surround-sound HDTV era, press bridges provide… 4:3 standard-definition NTSC color on a BNC and monaural audio on an XL-type connection, as in the Opamp Labs VA-32 shown at left and still being sold. If someone shows up with a recorder that can accept an HD-SDI input with embedded, AES-3, or analog audio, I can usually accommodate it. If there’s an HDMI input, and I know of it in advance, I can usually accommodate that, too. Unfortunately, those are rare. And that brings me to yesterday’s Panasonic press conference. 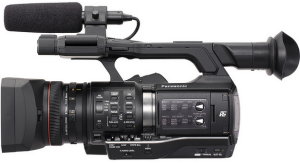 Among other products, the company is introducing a new HDTV camcorder, the AJ-PX270. It’s relatively low cost, and, based on everything reported about it at the press conference, extremely flexible and high in quality. The company suggested many possible uses for it, including news coverage. Its small size and light weight seem to make it a good choice for shooting a car accident or fire or tornado or for rushing in with the rest of the crowd to get shots of an acquitted or convicted defendant after a trial.

Unfortunately for me and others of my ilk who try to provide press feeds at planned events, it will also likely show up at those, and, like other camcorders of its ilk, it lacks any form of video input, and a news videographer bringing along a separate recorder would cancel the small-size, light-weight, and low-cost advantages. So, as I have done in the past, I will provide a monitor for the camcorder to shoot. And, as I have done in the past, I will tweak the numbers on my first Technology Year in Review slide, the one with the picture of the pre-HDTV-era press bridge still being sold.