A number of noteworthy events took place the week of April 6. Following the publication of former-President Jimmy Carter’s book A Call to Action: Women, Religion, Violence, and Power, current-President Barack Obama issued an executive order and a presidential memorandum to try to reduce inequality of pay between men and women. The annual equipment exhibition of the National Association of Broadcasters (NAB) opened, and at the show Atomos introduced its Ninja Star, probably the smallest, least-expensive professional high-definition video and audio recorder ever. Was there a connection?

In much of the world, the status of women has greatly improved in a short time. In the Kingdom of Saudi Arabia, women aren’t yet permitted to drive a car, let alone vote, but even in the United States it’s been less than 100 years since women were first allowed to vote in national elections.

Change continues. My flight to Las Vegas to attend the NAB show was piloted by a woman. When I deplaned, I saw a recruitment poster for the Las Vegas Police Department featuring a female officer. NAB’s Technology Summit on Cinema was presented by the Society of Motion-Picture and Television Engineers (SMPTE), whose president and executive director are both women, and the summit’s presentation on human vision came from a woman who probably had more advanced degrees (in fields ranging from theoretical astrophysics to neuroscience and psychology) than any male at any part of the event. 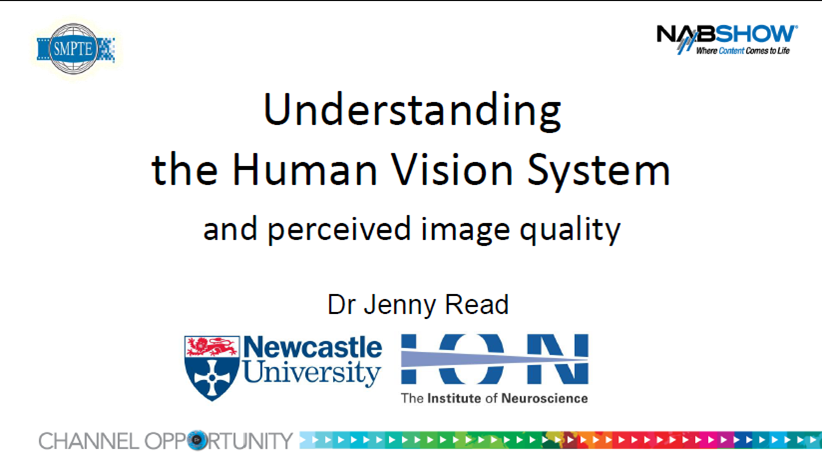 I attended an off-site technology demo run by a woman and featuring a female engineer. On the show floor, as I looked at a routing switcher and commented on its competition, a knowledgeable person gave me her detailed technical opinion about why her company’s products were superior.

On the other hand, as we walked down one of the exhibition’s aisles, my colleague Deborah McAdams, executive editor of TV Technology magazine, mentioned to me that there appeared to be an increase in “booth babes” this year. Having attended NAB shows every year for more than four decades, I had to try to put 2014 into its proper historical perspective. 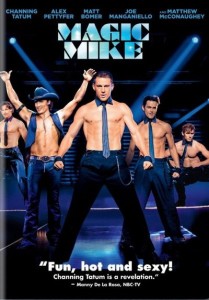 Certainly, there were more “booth babes” in some previous years, but had they increased recently? Perhaps.

A “booth babe” is not synonymous with a woman in an exhibit booth. In addition to engineers, salespeople, product managers, corporate officers, and, of course, buyers, such women could include models used by camera, lens, and even lighting-equipment manufacturers to show the quality of their imagery. There are also “spokesmodels,” people who can memorize and eloquently deliver scripted oration — so well that it’s only when you ask a question that you realize they didn’t design the products.

I suppose it’s conceivable that a “booth babe” could even be male, though McAdams had a hard time imagining such a possibility; maybe one of the men in the movie Magic Mike might do. A “booth babe” is a person, typically scantily clad, intended to draw people into an exhibit by sexual attraction. 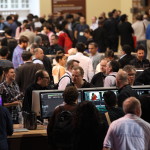 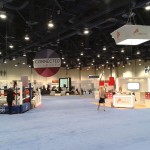 Sometimes attraction — sexual or otherwise — seems desperately necessary. Portions of the show floor were crowded (see Blackmagic Design’s booth at left, even on the show’s last full day), and others were desolate (see Connected Media World at right, even on the show’s opening day, even with the registration area immediately adjacent).

So perhaps Unified Video Technologies (UNIV) can be forgiven for trying to attract visitors to their booth with women in shorts (and shirts, sneakers, and boxing gloves) taking swings at each other in a miniature boxing ring at the periphery of their exhibit. Not even their battling “booth babes” (click the image for a larger view), alas, drew a crowd. 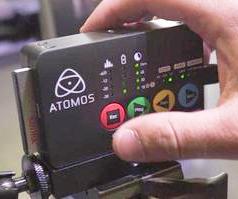 Atomos was different. They weren’t located in a desolate section of the least-visited exhibit hall; they were in the center of the Central Hall, visible from Panasonic’s exhibit, a short walk from Sony’s, close to the toilets and food concessions — in short, in just about a perfect location. And their products were not insignificant attractions on their own. The aforementioned Ninja Star, for example (shown at right), has a list price of just $295! Other relatively inexpensive Atomos products shown could record beyond-HDTV signals, display images in accurate color, and convert between different signal types. Lest that not be enough to attract show-goers to their exhibit, the products were advertised on seemingly every public-area screen, from the farthest parking lot to the main lobby.

There’s more. If, somehow, all of the above were not enough to attract you to their exhibit, those advertising displays also mentioned that the company would raffle its more-expensive products daily. As might be expected, there was a crowd that extended across the aisle and in front of other exhibits. There were some young women at the periphery of the crowd scanning badges and giving out raffle tickets, but it was a fully clothed man (and not a Magic Mike type) who drove the crowd into a pre-raffle frenzy, having them shout cheers that could be heard throughout the Central Hall. 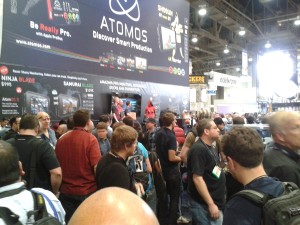 Then, after the crowd had already gathered, a woman rose to the stage. Her job was to draw the winning raffle tickets. She was dressed in a black bikini bottom but no top, though her skin had been painted.

Frankly, few in the crowd seemed to care. When the raffle was over, the crowd dispersed, though the topless painted woman was then available to pose for pictures (my apologies for the shaky-cam image to those of you who blow it up).

Did the Atomos topless-“booth-babe” gimmick help them sell more products? Or did some wonder whether products requiring such a gimmick weren’t good enough to attract customers on their own?

Having once attended a clothing-free computer-graphics conference in a Colorado hot-springs pool, I have no concern about nude bodies. But “booth babes” make me think about how far we have yet to go.