The following Press Release was issued today by the Future of Innovation in Television Technology taskforce was an 18-month collaborative industry project chaired by the DTG:

The highly anticipated conclusion of the 18-month collaborative industry project, the Future of Innovation in Television Technology (FITT) taskforce, was released today at the DTG Summit in London. Presenting the findings, Ed Vaizey MP, Minister for Culture, Communications and Creative Industries, said: 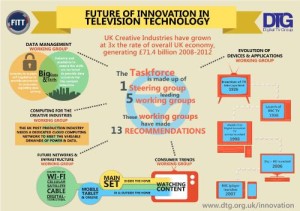 “The FITT report helps to clarify a number of important issues, opportunities and challenges facing the UK television industry. We will take careful note of the specific recommendations for government and will work closely with the industry-led Next Generation TV Planning Programme.”

The report covers new reviews of Consumer Trends, the Evolution of Devices and Applications, Computing for the Creative Industries, Data Management and Future Networks and Infrastructure. The Steering Group made 13 recommendations based on the evidence from this work. These include the establishment of a Leaders Assembly to guide a Next Generation TV Technology Planning Programme; a Technology Advocacy Programme for innovators to share newly-developed technologies and applications, and a cross-industry working group to respond to the challenges of big data in television.

Many of the recommendations were guided by consumer trend data and projections that showed that although viewing to the main television set remains stable, it is increasingly augmented by viewers choosing to watch on any device, any time both inside and outside of the home. The taskforce believes that these trends coupled with the increasing connectivity of devices, people and content creates massive business potential for UK media companies. However, consumer anxieties about privacy remain the biggest barrier to realising these ambitions, and this highlights the need for transparency from providers – potentially delivered via an industry-led review of self-regulation – and digital literacy programmes for consumers.

Dr. David Docherty, Chairman of the FITT taskforce and of the DTG, said in response to the report and recommendations:

“The UK TV industry is an amazing success story, with an enviable heritage of innovating in television technology. But it’s facing unprecedented challenges to its ability to compete, let alone lead. The FITT report is testament to the resolve that exists within the industry to deliver innovation that consumers and viewers want and to keep the UK TV technology industry globally competitive.”

The final report is available online at: http://dtg.org.uk/innovation.

Notes to the editor

About the Future of Innovation in Television Technology taskforce:

The Future of Innovation in Television Technology taskforce was an 18-month collaborative industry project chaired by the DTG. Launched in Sep 2012 by Ed Vaizey MP it was tasked with identifying specific measures aimed at leveraging the UK’s track record of innovation in television technology to create sustainable economic growth. Directed by a Steering Group of industry executives, the research was guided by five workstreams led by separate advisory groups looking at: consumer trends; the evolution of devices and applications; computing for the creative industries; data management; and future networks and infrastructure. The final report was published at the DTG Summit on 20 May 2014, with recommendations for government, industry and academia.

ABOUT THE DTG
The DTG is the industry association for digital television in the UK, providing the foundation for Freeview, Freesat and YouView and supporting the development of Sky, Virgin Media, BT, TalkTalk, Connect-TV and VuTV.

In collaboration with industry the DTG has helped ensure a great consumer TV experience by developing and publishing its technical specification, the D-Book, which has been deployed in over 100m terrestrial televisions, set-top-boxes and recorders since the introduction of digital TV in 1998.

Central to digital TV in the UK for nearly two decades, the DTG is currently embracing the convergence of content and networks across industries and focussing on the efficient delivery of video to all screens – mobile, tablet and TV, in all formats – standard, high and 4k definitions.

It’s supporting the next generation of digital TV and related technologies though its work in the following areas: Broadcast AV; Connected AV; Mobile AV; Spectrum; and Ultra HD.

The DTG Summit 2014 is the annual conference of the DTG. This year’s theme is “What is the real future of TV?”