NHL Winter Classic Gets New Sound for the New Year

The eighth NHL Winter Classic game that took place Jan. 1 at Gillette Stadium near Boston didn’t offer the same challenges as previous outdoor hockey games, with nary a snowflake in sight as the warmest year on record closed out. But it was the crown jewel in an NHL season that’s seeing the return of 5.1 surround sound to regular-season broadcasts, and it was the first Winter Classic in discrete surround.

According to NBC Sports A1 Tim Dunn, who was mixing his third Winter Classic, the show’s audio benefited from the ability to place shotgun microphones to capture crowd sound down low, next to the robo cams on each goal, in addition to stereo pairs placed higher up and aimed at the stands.

“The NHL is conscious about how the playing area looks on camera, and they don’t want microphones on poles,” he says. “But we were able to position those mics near the cameras, and they didn’t stand out visually but caught a nice roar from the crowd.” 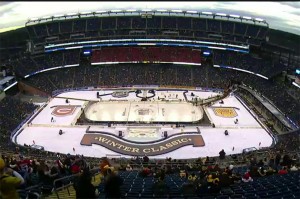 NBC Sports’ goal was to get the Winter Classic to sound as big on television as Gillette Stadium.

Fans may want to see players battling the weather as much as each other on the ice, but Dunn says cooperative weather let him get good, clear effects sounds out of the rink, with crisp-sounding sticks. And the sounds didn’t get lost in scrums behind the goals, thanks to Sony wireless lavaliere microphones in the goal nets.

“Those let you hear the puck hit the goalie’s pads,” says Dunn, adding that they also can pick up frenzied chatter as players converge on the goal. With no player mics deployed, they were the closest viewers could get to hear player dialogue. He notes that he was cautious there, pulling the fader back if it looked like tempers might flare and language could become an issue: “There’s no delay on this game.”

Aside from the brass section of the Boston Pops Orchestra, whose performance came to Dunn’s 64-channel Calrec Artemis Beam console aboard the NEP ND6 production truck as a feed from a separate production company, most of the game’s audio came through 10 Crown PCC 160 surface-mounted half-supercardioid microphones attached to the boards ringing the rink. Those do a good job capturing the relentless transients of sticks and the constant clack of skates, but they are subject to wind noise, something they don’t encounter inside arenas.

“We’ve been trying to come up with an effective windscreen for them for a long time, trying different materials,” says Dunn. In the meantime, he uses EQ to filter out lower frequencies that rumble in the wind.

This year’s use of 5.1 surround helped achieve what Dunn says is the biggest audio challenge of the Winter Classic: getting the game to sound as big on television as the football stadiums they’re played in.

“The hard part is getting the crowd right, because they’re set so much farther back from the glass than they are in an arena,” he explains. The 5.1 configuration lets the crowd occupy and swell the rear channels while the LCR focuses on the play and announcers. That’s good, because, while hockey offers a lot of action to watch, “there’s a lot to listen for,” too, says Dunn.

‎According to Karl Malone, director of sound design, NBC Sports and Olympics, the network experimented with surround for hockey several years ago but set-top–box issues had caused some viewers to perceive that announcer audio was being buried.

“We stepped back for a season and looked at how we could keep the mixes engaging and exciting as well as find a balance between a [properly] set-up 5.1 system at home and a standard ‘problem’ TV at home,” he says. “We worked at improving our mixes with the help of all our NBC Hockey A1s and worked with our  -6/-6 goal.”

Malone is pleased to hear hockey back in surround. “The NBC A1s have done a tremendous job in having a consistent NBC sound whilst including the attributes and flavor of a particular stadium or a particular fan base,” he says. “Hockey is the perfect sport to be produced in surround.”