Ross Video was recognized at the 67th Annual Technology & Engineering Emmy Award for openGear. The National Academy of Television Arts & Sciences (NATAS) announced the recipients on September 2, and the awards took place on January 8 in Las Vegas. 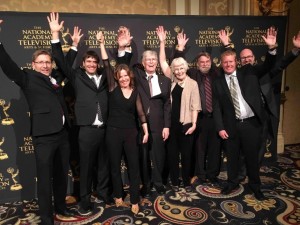 “One of the reasons for the exciting growth of our industry can be attributed to what these talented and innovative companies have achieved,” said Bob Mauro, President, NATAS. “Their unrelenting passion in pushing the boundaries of what television can be continues to surprise and inspire us and we salute their efforts with this well-deserved recognition.”

Ross was honored for their Open Modular Platform for Broadcast and Production Distribution Conversion Equipment, the industry standard platform that Ross markets as the openGear. openGear was first created 10 years ago, as the industry’s only open modular platform and now provides a broad ecosystem of plug and play solutions from a wide range of manufacturers.

“The Ross Video code of ethics states that we will always act in our customer’s best interest as well as cooperate and help other friendly companies’. This has always guided us from the original concept of an open platform, to the ongoing success of over 60 contributing openGear partners with many tens of thousands of frames installed around the world,” explained David Ross, CEO for Ross Video. “We are greatly honored to receive this industry recognition at the highest level, with a Technology & Engineering Technical Emmy that supports our innovating thinking and contributions to the industry.”