University of Arkansas Calls On Daktronics for Campus-Wide Upgrades

Daktronics has partnered with the University of Arkansas to bring 11 new LED video displays to four different venues on campus in Fayetteville, Arkansas. Installation began in September at Bud Walton Arena and will finish up with the other three facilities early in 2016, including the largest display in college baseball. Venues receiving equipment include Bud Walton Arena for basketball, Baum Stadium for baseball, Bogle Park for softball and the Randal Tyson Center for indoor track. 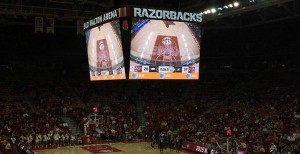 ”In our continuing efforts to enhance the game-day experience for our fans, we partnered with Daktronics to provide new video displays at four of our most popular venues,” Vice Chancellor and Director of Athletics Jeff Long said. “From the breathtaking four-sided video display at Bud Walton Arena to the country’s largest college baseball video board at Baum Stadium, Razorback fans can continue to enjoy some of the nation’s best facilities with dynamic video boards to match.”

Receiving the most displays of these venues, Bud Walton Arena will boast a new four-sided centerhung video display system and four stanchion displays on each basket support for a total of eight displays.

Four stanchion displays featuring 6 millimeter line spacing will be installed on the sides of the basket supports, two displays on each support. These displays will provide the opportunity and flexibility to highlight multiple sponsors throughout events.

“It’s exciting to provide multiple video displays on one campus to meet all of the needs of the University of Arkansas” said Perry Grave, Daktronics sales representative. “We’re thrilled to have been selected to meet their needs and look forward to seeing the project take shape over the coming months.”

Three more displays will be installed at three other facilities on campus including the following:

Baum Stadium – One display that will be the largest display in college baseball. It features a 13HD pixel layout and measures approximately 25 feet high by 71 feet wide.

Bogle Park – One display that will be the fourth largest in college softball. It features a 13HD pixel layout and measures approximately 14.5 feet high by 43 feet wide.

All of these displays incorporate the same features and content capabilities as the displays at Bud Walton Arena. The outdoor displays feature industry-leading environmental protection ensuring they perform during all types of weather.