Super Bowl 50 will mark the high point in the life of NEP’s SSCBS production unit, a cutting-edge unit that was the backbone of the Thursday Night Football production and will bring Super Bowl production into the IP era, thanks to an Evertz IP router and plenty of hard work over the past six months to ensure that operating in IP mode is as reliable as working in traditional baseband mode. 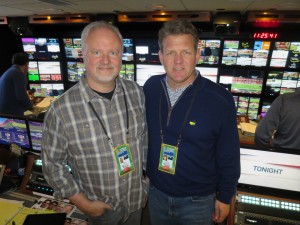 NEP’s Bill Niehoff (left) and Mike Werteen inside SSCBS, the production unit at the center of CBS Sports’ coverage of Super Bowl 50

“We were thrilled when CBS decided on SSCBS, and Thursday Night Football has been like a Super Bowl every week,” says Mike Werteen, president, U.S. Mobile Units, NEP Group. “And it also rolled out a lot of new technology, like an IP router, a DANTE-based communications systems, and other new systems that had not been used before. It took a couple of weeks to get smoothed out, but, since then, it’s been fabulous.”

The NEP presence at Super Bowl 50 extends beyond SSCBS. Super Bowl fans around the world will see a world feed produced out of EN1, the halftime show will be produced in NEP’s Denali California unit, the NFL Honors program tonight will be produced out of Denali Summit, SS16 is at Super Bowl City in San Francisco, and NEP also is supporting ESPN’s effort at Marina Green in San Francisco. NEP also has 75 employees on hand to ensure all operations go as smoothly as possible.

Bill Niehoff, engineering manager, NEP, is onsite, leading the team overseeing SSCBS, a role he has had the entire season.

He is also at the center of making sure that an IP-based production is as rock solid as a baseband production in terms of reliability and ease of management.

“Learning how to incorporate IP into the outside world was the big challenge: it plays well in its own IP-to-IP world, but you need to figure out how to get all the legacy baseband signals in and out and also do that efficiently. But, once you have converters to do that, there is a lot less cable on the ground or breakups because of bad connectors.”

And there is one example of the Evertz IP router being able to tie directly to another IP router: the Levi’s Stadium scoreboard-control room is also all-IP. Notes Niehoff, “One of the cool things is, the router in the stadium put in some IP cards and we can feed to and from the stadium over fiber.”

He envisions IP-based production’s only getting easier, especially when other manufacturers get on board.

“When we see Sony cameras that have IP-based camera-control units or a Grass Valley switcher that talks IP, that will make things easier,” Niehoff adds. “But you need to move along with IP technology because it’s coming.”

Following the Super Bowl, SSCBS will hit the road for its first complete season of golf coverage, where its strengths and capabilities will once again be leveraged. And, next week, NEP’s newest IP-based production unit will be used for the NBA All-Star Game in Toronto.