The “Northern Lights” will be visible on Canada’s Parliament buildings again this summer thanks to a striking new projection mapping show delivered by 17 Christie 3DLP projectors with content provided by id3. 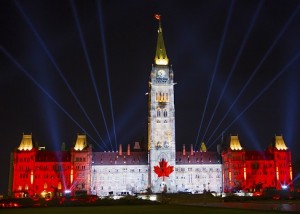 The half hour “Northern Lights” show celebrates Canadian history, achievements, the majesty of its vast landscape and the diversity of its people. The 2016 show runs from July 9 to September 10.

With this revised mapping, “Northern Lights” is twice as bright with twice the contrast compared with its predecessor “Mosaika” – which used nine Christie projectors. The new presentation immerses the audience into the Canadian experience with a 7.1 audio track with full narration, 44 moving lights and over 100 LED lights. This thrilling thematic journey through Canada’s history unfolds on the 472-feet long, six-story high Parliament Building and 302-feet tall Peace Tower.

“‘Northern Lights’ is a marvelous accomplishment that showcases what it means to be Canadian in a way that is visually fascinating, instructive and engaging, ” said Kathryn Cress, vice president, global and corporate marketing, Christie. “We are honored the Department of Canadian Heritage uses Christie technology for this unforgettable tribute to Canada and its people.”

The show is divided into five “books,” each with its own theme.

Book One: Foundations of the Nation

A fluid ink-in-water style is used to paint stories of how people from all over the world have expanded Canadian foundations. From traditional indigenous ways of life and early European settlements to modern citizenship ceremonies, these stories are linked by people’s desire to call Canada “home.”

Partnership and determination have made Canada strong. Using an illustration style inspired by classical paintings, this book explores alliances that have shaped Canada.

Book Three: Discovery and Adventure
A lithographic style takes audiences on a voyage highlighting the achievements of explorers, scientists and innovators whose quests into the unknown continue to inspire us to follow our dreams.

Book Four: Valour
This powerful book combines dramatic performances with archival materials and charcoal drawings to honor the men and women who have served their country, both at home and abroad, in military conflicts since the First World War.

Book Five: Pride and Vision
Inspired by the stained glass windows of the Memorial Chamber in the Peace Tower, this intensely colorful book celebrates the natural grandeur of Canada and the diversity of its people.

“Everything came together for a seamless presentation and we have a very good history of working with the Christie products – this being the third show we have used Christie. The yellows and oranges against the blacks really come through much sharper because of the higher contrast we now have,” said Beauvalet.

“The brightness is so much stronger than before, especially in certain areas on the Parliament building that were mapped with only one projector on the Mosaika show,” Beauvalet continued. “However, for this show, we have three Christie projectors in the same area so we are tripling the brightness – it makes for a dramatic difference. You can see some of the most succinct images or the more distant visuals that are used, the capacity of the projector to reproduce the images and the colors that were chosen are big pluses.”

As the home of the Canadian Parliament and a tourist attraction drawing millions annually, the Parliament building is almost sacred ground and the installation team has to tread carefully.

“We can’t be blowing out holes where we need them to run cables and we can’t bolt things to the wall. We have to make sure that during the day, the Parliament doesn’t have all this equipment in front of it; it has to look like the Parliament building,” added Beauvalet. “Right at the base of the building is a wall that is called the ‘Vaux Wall’ and, right in front of it, is trees and shrubs then a space between the shrubs and the wall. We hide a majority of the equipment behind the shrubs, but can’t touch the wall or dig into the ground. The magic comes from not seeing the sources of light or sound and people discover this hidden gem that is seen only at night when it is turned on.”

A swell of national pride
“At the end of the show during ‘O Canada,’ there is a swell of national pride that overcomes people and they all stand up during the playing – it is quite magical to see,” concluded Beauvalet. “The comments I get about the technology have all been extremely positive and everyone is blown away by how bright, loud, and clear the show is. It’s the same with the content: we get a lot of really good comments on the story we tell and how we do it.”