Opera has a long history of bootleg recording. The “Golden Age of Opera” label, begun in the 1950s, used unauthorized off-air recordings from Metropolitan Opera (Met) radio broadcasts. Before that, Wagner-Nichols promoted recorders and recordings of those broadcasts. And Classic Editions issued an opera recording supposedly made in Italy that was, in fact, an off-air recording of a 1947 Met broadcast. The first off-air recording ever was made of opera singer Nellie Melba (right) in 1920 (click to enlarge the images).

Met librarian Lionel Mapleson (left) has been called “The Father of Bootlegging” for the recordings he made there beginning in 1901, though they were fully known and authorized. But bootleg opera recordings began even earlier.

The following appeared in The Sun in New York on November 1, 1888. The images here are added. The event was also covered in many other newspapers, from the New-York Daily Tribune to the Oakland Tribune as well as Electrical Review. The Casino, incidentally, is where the opera Cavalleria Rusticana had its New York premiere. 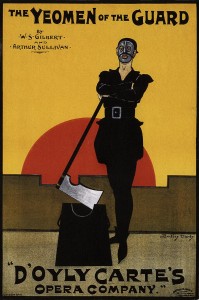 As soon as an opera is produced with any degree of success, especially one by Gilbert and Sullivan, the horseshoe-scarf-pin managers of the never-pay-royalty companies fly to New York and by some trick or device steal the work, and in less than a week astonish our rural cousins with the New York and London success. It is customary for some music publishing firm to arrange with the authors or controllers of successful operas for the publication of a libretto and piano score, and by doing they make it comparatively easy for any one to perform the opera, but in the case of “The Yeomen of the Guard” the libretto only was published, consequently the piratical companies could do nothing with the opera.

The average small opera manager is as full of expedients as an egg is of meat and generally finds some way out of a dilemma, especially if a sheriff is the dilemma; but the latest trick, as performed at the Casino last night, is both unique and interesting. Yesterday afternoon Mr. Pollock, the treasurer of the Casino, received a telegram asking that a box be reserved for a Mr. Frank Wilber. One of the lower boxes was reserved, and at eight o’ clock last evening a commercial looking man entered the lobby, hurriedly called for the box, paid the necessary amount and was ushered in. 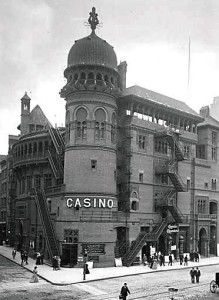 Noticing that the gentleman had a large telescope valise, Mr. Daly, the usher, asked if he should take it to the check room for him, but the gentleman declined to have it checked giving as an excuse that the case contained jewelry, and he preferred to have it remain with him. Very little attention was given to the lone man in the box, and had it not been for the watchfulness of Mr. Daly it is probable that the man and his trickery would have escaped detection. The house was packed to suffocation, and when the finale of the first act was begun Mr. Daly opened some windows in the lobby to give the audience a little fresh air.

As he turned from the windows his eye lighted upon a queer-looking machine lying on a chair near the lone man. Daly’s first thought was of dynamite and anarchy, his next of how to remove the disciple of Herr Most and his death dealing machine, his next thought–but before he thought again he had planted the man and his machine in a chair in Mr. Rudolph Aronson’s office and was standing at a respectful distance from him waiting for either the machine to explode or the man to begin a harangue.

In the office at the time were quite a party of gentlemen chatting with Mr. Aronson, among them being Col. Stark, Dr. Nesbit and Albert Aronson, but they very quickly sought other quarters when Mr. Daly and his charge entered so hurriedly. Mr. Aronson, with his usual coolness and presence of mind, remained seated and awaited developments. The mysterious stranger opened the conversation by saying:

“Well, I guess I’m done for. I suppose you want to know who I am and what I’m doing here. I manage a small opera company, and I desired to include ‘The Yeomen of the Guard’ in my repertoire. I could not obtain the music so I concluded to come here to-night and take it down by the aid of a phonograph. If your precious usher had not been so inquisitive I’d have had the whole blooming opera, but I only got the first act.”

He turned the crank of the mysterious box and it emitted the music of the opera as clearly and distinctly as though the artists and an orchestra were performing it. Mr. Aronson confiscated all the cylinders and told Wilber to go, which he did very quickly.