It’s that time of year again, time for FC Barcelona and Real Madrid, two of the most popular football clubs in the world, to face off in El Clasico in Barcelona this Saturday. Mediapro Group, the production company behind all of La Liga’s match coverage, will once again be on hand with a large HD presence for the match and will also produce the match in 4K, delivering it via both NeuLion and a new UHD app developed by Overon, a member company of the Mediapro Group.

“What makes 4K so exciting is that it significantly enhances the experience for our fans in Spain,” says Mediapro CTO/Operations Director Emili Planas Quintana. “Fans continue to ask for ways to get closer to the match and the field of play, and, with 4K, that experience feels like you are sitting in the stadium. With NeuLion, we will bring 4K to our fans anywhere in the world and be the leaders in the production and delivery of 4K events.” 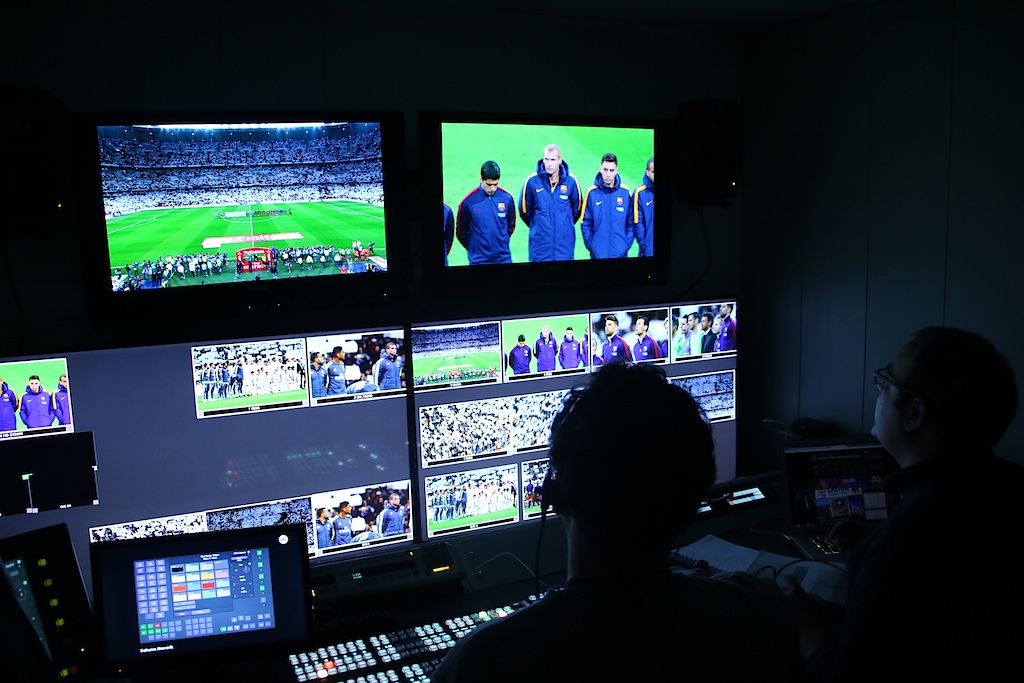 El Clasico will be produced in 4K this weekend.

The 4K production will include eight Panasonic 4K cameras as well as a dedicated iMovix ultra-slow-motion 4K camera, according to Planas. But the 4K efforts are part of a much larger production, which includes 73 camera positions for both international and unilateral feeds.

“We will have six HD OB vans and one UHD/4K OB van working on the Clasico,” says Planas. “The 4K van, OB39L, is based in Eumovil, which is in Madrid. In this case, it will be operating side-by-side with the HD production for a different feed.”

He adds that none of the HD cameras will be upconverted to UHD, a move that maintains a pure 4K/UHD feed. “We will downconvert the 4K program and some of the UHD cameras to HD to help the HD production in case of problems with the HD cameras.”

The match will be available live in 4K in Spain via VodafoneTV (an IPTV service) or Movistar+ (an IPTV and satellite platform). It will also be available via other broadcasters in 4K but not as a live match. In addition, Mediapro is working with NeuLion to distribute the match in 4K directly to smart TV sets.

“We are working with NeuLion for test purposes,” he says. “we will also test the NeuLion encoding with other TV manufacturers as we evaluate different options for next season.”

The NeuLion Digital Platform provides licensed components ranging from content ingestion, encoding and management to content security, monetization, and monitoring, streamlining the content-delivery process. The platform facilitates the streaming and sharing of high-quality content up to 4K/UHD, including premium sports and entertainment content.

“Streaming the Clasico soccer match live in 4K for the first time is a new milestone, as we lead the momentum in the end-to-end delivery of live 4K sports to Internet-connected devices,” says NeuLion CEO Dr. Kanaan Jemili. “We are very excited to have the opportunity to partner with Mediapro and Overon, and, over the coming months, we expect to continue to deliver great compelling experiences to sports fans.”

NeuLion co-founder/EVP Chris Wagner says the NeuLion encoder is located in the UHD production truck, which will take the 4K signal and encode it using MPEG-DASH.

“MPEG-DASH is the way to go go because it scales better,” says Wagner. “The European market is more focused on MPEG-DASH.”

Once encoded, the signal will be sent to Sony UHD sets, which are already equipped with the NeuLion SDK. That SDK allows the Overon 4K app to deliver the 4K stream to the TV set at 4K resolution and at 60 fps.

The Sony UHD sets will be located at viewing locations around the world, including Camp Nou Stadium (where the match is being played), Mediapro/Overon offices in Barcelona and Madrid, and NeuLion offices in the U.S. The Overon 4K app will be made available for selected 4K devices in the coming months.

“The PPV model will emerge for 4K sports content, and we can deliver it via over-the-top services,” says Wagner. “Movies are great, but, at the end of the day, sports becomes the real anchor for the guys selling the TV sets.”