As boxing legend Manny Pacquiao heads to the 66th and final fight of an illustrious career, Team Pacquiao is partnering with Global Sports Streaming (GSS) to bring his dedicated fans a front-row look at his training camp regimen and pre-fight activities through a series of livestreams to Pacquiao’s YouTube Channel. GSS has selected LiveU’s new Solo ‘plug and play’ live streaming bonding solution to connect automatically to YouTube Live. Team Pacquiao is using its social media network to drive the fighter’s more than 12 million fans to his YouTube Channel. 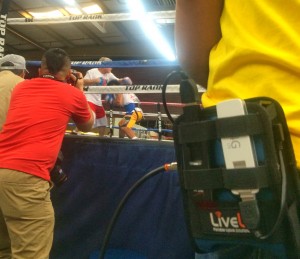 “Manny has established a brand that goes well beyond boxing and wants to maintain and grow his fan base for his final fight and future endeavors, which include a political career,” says GSS Producer/Director and Founder Armando Bareno II. “Live streaming Manny’s workouts is the best way to connect with his fans and grow his channel quickly, while bringing added attention to the upcoming fight in a unique way.

“People want instant access to exciting content about high-profile athletes, celebrities and events they are passionate about; live streaming provides that,” he continues. “With Solo, we can deliver that content with greater quality than viewers expect to see online. Live streaming is a powerful tool that we want to take advantage of.”

A former producer of online content, live streaming and broadcast content for Bob Arum’s Top Rank Boxing promotions company, Bareno founded GSS in 2015 and had previously used LiveU video technology, calling himself “a big fan from day one.” He adds that “GSS has tested several online streaming solutions, and that Solo worked great, while other options couldn’t match Solo’s portability and struggled in areas of high traffic use.”

“While we can live stream on cell phones like everyone else, the problem with phones generally is the quality,” Bareno says. “But with Solo, we can plug the encoder into a cell phone or a professional camera and receive a higher quality source. It’s important because we want Manny’s YouTube Channel and GSS to be known for high-quality professional programming.”

Using cell phones, along with prosumer and professional cameras, GSS scheduled a series of live streams from various outdoor and indoor training locations, culminating with Pacquiao’s arrival at the MGM Grand Arena on fight night.

Following the first live streamed event — Pacquiao’s morning run through Los Angeles’ Griffith Park on March 25 — Bareno reports, “I was really happy with the results. We put Solo under some tough conditions and it performed great. Griffith Park is not a cell phone friendly area, so I was a little concerned going in, but despite the dropouts in expected areas the, the Solo pack stayed connected in some tough conditions.”

“Solo solution brings LiveU’s broadcasting expertise to the online media market, delivering a professional-grade live video product, enabling everyone to start streaming at an affordable price,” says Avi Cohen, LiveU Co-founder and COO.” It meets the need of sports organizations and other markets— including entertainment, politics, gaming and worship— for a simple, integrated solution to seamlessly send contribution video over the internet to anyone, anywhere. GSS is among the early adopters of this solution and is effectively leveraging its best-in-class capabilities to deliver an unmatched experience to Manny’s legion of loyal fans.”