Yesterday, at the 2016 NAB Show in Las Vegas, the National Association of Broadcasters’ big annual event, I visited “The ATSC 3.0 Consumer Experience” at the southernmost end of the corridor outside the upper level of the South Hall. It’s shown above in an artist’s rendering. It was actually bigger and more crowded, so crowded, in fact, that I had to queue to get into the audio room.

Slightly north of that ATSC 3.0 Consumer Experience area are the two main entrances to the South Upper exhibits. Each morning—especially Monday morning—there’s an even bigger queue waiting for the hall to open. North of those entrances is the exhibit of the Society of Motion Picture and Television Engineers (SMPTE), and north of that are two corridors of rooms where sessions and events take place.

I was on a panel in a session that ended at 3:30, and I was surprised to see a long queue doubling back in the sessions corridor and extending into the main corridor for a 4:00 event in the same room. When I emerged from the ATSC audio room, the queue had reached that far. I joined it, and we moved past a crowd of students at the SMPTE exhibit. By the time we got to the session room—the largest at the NAB Show—it was already filled beyond capacity. Its attendance has been described as “standing room only,” but that’s not true; there wasn’t really even room to stand. Anyone fainting could have been assured of remaining upright. 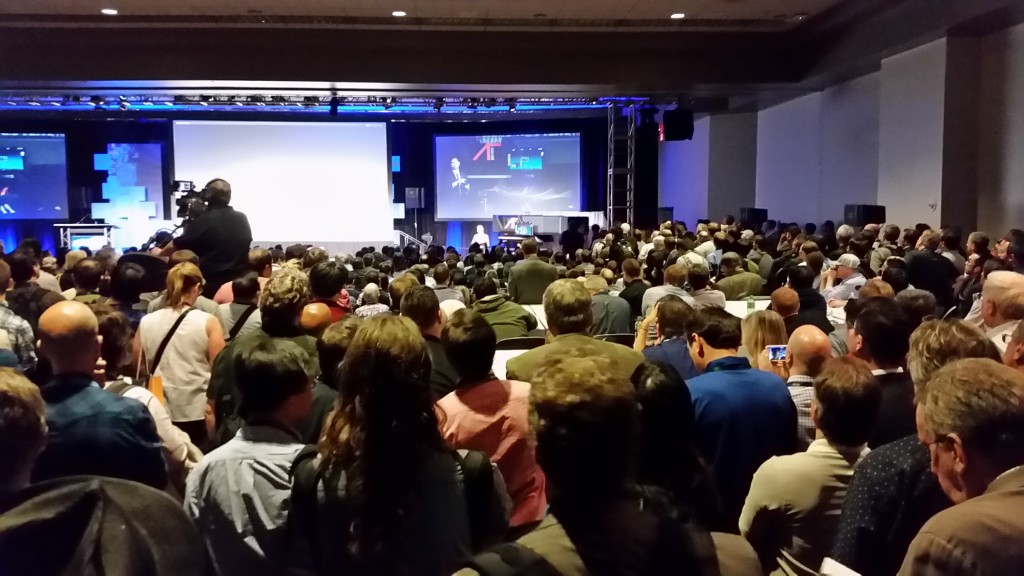 We had all come to watch the unveiling of Lytro Cinema. If you click on the image above and click again to blow it up, you’ll see the camera in the center—not the TV camera with an operator behind it; the Lytro Cinema camera is the gigantic horizontal object at the front of the room, about the size of a large coffin and weighing more. Its statistics are mind boggling: a sensor with what is described as 755 RAW megapixels, 300 frames per second, 16 stops of dynamic range.

More important, it’s a light-field camera. That means that, after the shooting is over and the talent has gone home, it is still possible, in post, to change the focus, adjust the depth of field, reframe the shot, do motion tracking, and much more. I oohed and ahhed with the rest of the crowd. But I also thought back to an uncrowded exhibit in the Central Hall a year earlier.

Then and there, I watched as, after production had been completed (on a different continent), a scene was re-lit. A spotlight moved around a performer. A background was made dimmer. There was a motion-tracking shot without any camera motion (a different version is shown in this earlier posting). Oh, and this rig was small and light enough to hold with one hand.

It was the Fraunhofer Institute’s exhibit, and they were again showing their lightfield camera system (one version shown at right), which, like the Lytro Cinema demonstration a year later, had been used to shoot movie scenes (left). That was in 2015.

In previous years, the Fraunhofer light-field array provided images that—in post—were refocused and reframed, used depth-based keying, had their depths of fields changed, and much more. They were shown at NAB Shows, the International Broadcasting Convention, and the HPA Tech Retreat, among other venues.

Great things can be found at the NAB Show in big, crowded rooms. But they can also be found in small, uncrowded exhibits.