With the Olympic Games opening in Brazil this week, it might be worth noting that the first to feature television cameras took place in Germany 80 years ago. But those weren’t the first sports events with television coverage. Baseball was televised in Japan in 1931; before that, tennis was captured by a video camera in the U.S. The U.S. was also home to the first scheduled television newscasts, but the idea of them was first published in France. The first book about television technology was published in Portugal. The first scanned electronic video display was invented in Russia. What television historian George Shiers called “a feasible system” first appeared in Australia. The earliest video image (crude though it was) was created in Ireland. A key principle of video cameras came from Hungary. Inventors in Argentina and South Africa received early television patents.

Television was clearly a global development. But, if the most-important contributions are considered, the country that stands out is none of those in the previous paragraph. It’s Scotland.

This year, the National Academy of Television Arts and Sciences awarded a Technology & Engineering Emmy to Scottish inventor Alexander Bain. He did not accept in person; he died in 1877. BBC Television ran three stories on the award, one about the arrival of the statuette at the site of his grave, Kirkintilloch, Scotland. In 1842 Bain came up with the concept of scanning for image transmission and received a patent on it the following year. It included pixels, horizontal scanning lines, frames (his pixels were physically in a constructed frame), line synchronization, and frame synchronization. No one had previously proposed anything of the sort.

Though he also worked on electronic television, Baird is best known for his early work in electro-mechanical television. Those “receivers” (displays) required a means of converting the video signal into variations in light intensity (electro-optical transduction). But the earliest television research predates even Edison’s or Swan’s incandescent lamps. Scots to the rescue! William Nicol came up with a prism for polarizing light, and John Kerr came up with a way of rotating the polarization based on the strength of an electrical signal. Nicol prisms and Kerr cells allowed even oil lamps to be considered as television-display light sources, as shown at left in Henry Sutton’s “Telephane.”

Today’s video and digital-cinema projectors do something similar, though the electro-optical transduction is often accomplished with tiny moving mirrors. The idea of using an electrical signal to move a mirror was the basis of another Scottish invention, the mirror galvanometer, created by William Thomson in 1858 for the first transatlantic telegraph cable. It was the failure of that cable that led to the research that resulted in television’s other key principle, the conversion of variations in light intensity to an electronic signal (opto-electronic transduction). It was promoted by such great Scots as James Clerk Maxwell, whose work on electricity, magnetism, and light led to broadcasting and other wireless transmission (among other innovations), and Thomson, a president of the Society of Telegraph Engineers, a sponsor of Bain, and, later, Lord Kelvin (yes, the K of the 3200K, 6500K, and 9300K color temperatures of television lights and displays).

Alexander Graham Bell, another Scot, also promoted opto-electronic transduction. He’s better known, of course, for the invention of his telephone, which led to television sound. But his “photophone,” a means of transmitting electrical signals via a beam of light (the reason he promoted opto-electronic transduction), led to fiber-optic transmission systems.

The telephone was preceded by the telegraph. Schemes for transmitting information at a distance date back to smoke signals, signal fires, jungle drums, and horns (so named because early ones were made from hollowed animal horns). The word telegraph was first used in the late 18th century for a system of information transmission involving semaphore arms on towers. And the electrical telegraph? It’s even older! A complete description appeared in The Scots Magazine in the February 1753 issue under the headline “An expeditious method of conveying intelligence by means of electricity.” It also includes what might be the earliest description of insulated wire. 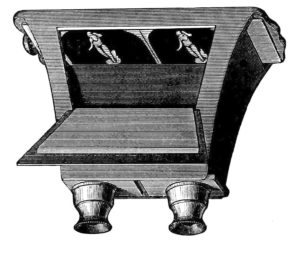 The article was written by someone using the initials C. M. and writing from Renfrew (near Glasgow). Sir David Brewster, a Scot called “the father of modern experimental optics,” whose designs have been used for stereoscopic 3D TV and movies, was among those who searched for C. M.’s identity.  According to John Joseph Fahie in A History of Electric Telegraphy to the Year 1837 (1884), “certain it is that, in October 1859, [Sir David Brewster] accepted the evidence in favour of C. M. being a Charles Morrison, with as much warmth, and, we fear, as much haste, as he had done that for Charles Marshall in the previous December.”

Perhaps C. M.’s revelation of conveying intelligence by electricity influenced Sir Walter Scott’s story “My Aunt Margaret’s Mirror.” There had been previous see-at-a-distance crystal balls and magic mirrors, but Scott’s might have been the first called an “apparatus” with a maximum duration of use of seven minutes (to prevent circuit overheating?). At right is a reproduction of a watercolor by John William Wright, showing the “mirror” in operation, published with the story in 1828 (from the collection of the Metropolitan Museum of Art, www.metmuseum.org). Click the image to enlarge it.

Scott’s story predates even Bain’s image scanning, but Scots have contributed to more-modern forms of television as well. The BBC pioneered 100 Gbps IP connectivity for the television facilities at the Commonwealth Games in Glasgow in 2014, which also offered 100-frame-per-second viewing, virtual reality, metadata augmentation, and the ability for home viewers to zoom in and pan around. Of course, that required scanned electronic television, not electro-mechanical. Who first came up with that idea? American Philo Farnsworth wasn’t yet two years old when a Scot, Alan Archibald Campbell-Swinton, who had previously come up with magnetic focusing of electron beams, published a description of end-to-end scanned electronic television in Nature.

Campbell-Swinton sold himself short. “It is only an idea with which I am concerned,” he wrote in 1912, “and such an apparatus will never be built following these principles.” What might be the best quote about the technology came, however, from a Scott who wasn’t a Scot: C. P. Scott, legendary editor and publisher of the Manchester Guardian, whose trust still owns what’s now called The Guardian. “Television? The word is half Greek and half Latin. No good will come of it.”