There’s optimism on the RF front; new ventures are announced

The Audio Engineering Society’s AES Show 2016 ended Sunday with what most attendees agreed was an engaged crowd filling its dozen expo aisles and extensive conference program.

Given the turmoil surrounding the changing RF landscape, which is in the middle of seeing its desirable 600 MHz territory auctioned off to mobile-technology users, it’s not surprising that the topic garnered considerable mindshare at the show.

One panel on the schedule was dedicated solely to the subject. However, the message from the Wireless Spectrum Update session was unexpectedly more anodyne than alarming. While acknowledging that the loss of the 600 MHz range via a series of FCC-mandated auctions would be disruptive, panelists suggested that recent events might be mitigating that disruption to a degree. Sennheiser’s spectrum guru, Joe Ciaudelli, noted, “The longer the auction stays open, the better it is for us. We’re in better shape than expected.”

That’s because, he explained, each successive round of the auction has decreased the amount of spectrum to be sold off. The initial numbers have not met expectations: asking price for 126 MHz of television airwaves to be sold for wireless use has come in at just over $23 billion thus far, well below the hoped-for clearing target of $88.4 billion. As a result, under the auction’s rules, the range of available spectrum for sale now decreases to 114 MHz, and as much as half the professional wireless microphone systems in use today could remain legally operational, with many still within the broadcast-friendly UHF range.

Shure VP, Corporate and Government Relations, Mark Brunner summed up the emerging sense of optimism: “We’re still losing a big chunk of the spectrum, but the range of alternative options is growing and will be able to some extent offset the losses.”

Audio-Technica VP, R&D/engineering, Jackie Green expanded on that, adding, “There won’t be one wireless solution anymore. There will need to be multiple tools in our toolbox.” 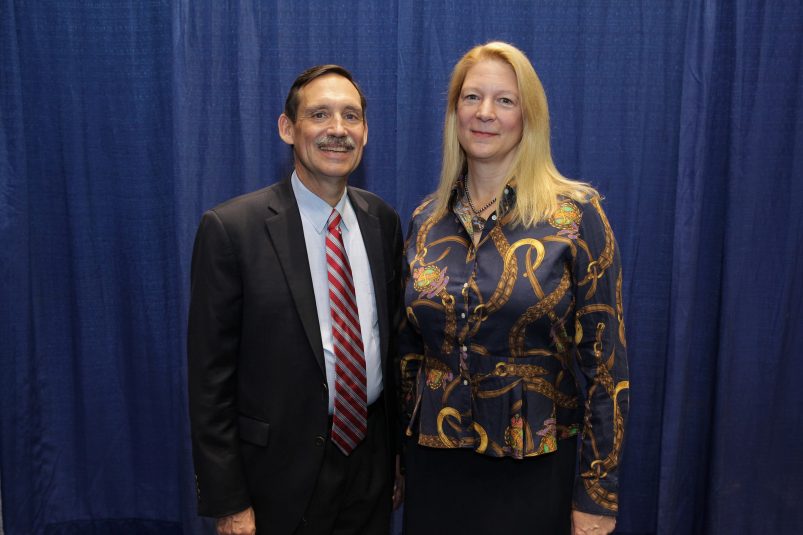 A-T’s New Venture
Audio-Technica showcased one of those tools at a press conference at its booth, and it’s more than a product: the company announced formation of an entirely new subsidiary. Alteros, which will occupy a separate building across the street from A-T’s U.S. headquarters in Chillicothe, OH, is tasked with developing wireless systems in response to ongoing spectrum loss. The new company’s first product, the GTX wireless series, will operate in the 6.5 GHz range and provide up to 24 channels of wireless audio without the need for frequency coordination, once it becomes available early next year.

Alteros, which will be headed by Green as president/CTO, initially employs eight A-T engineers, with at least two more expected to be hired soon. “We’re deliberately looking outside of pro audio [for new hires],” she explains. “Our base is still pro audio, but, as we move up into the 6 GHz to 10 GHz ranges, we’re entering new territory, and we need new thinking to go with that.”

Higher frequency ranges bring different ways of design and workflow. For instance, the 6.5 GHz band will have limited range compared with the UHF spectrum, and, at 2 nW, the GTX series will have a range of barely 100 ft. but will achieve necessary area coverage by creating a grid of cells from multiple systems; up to GTX transceivers can be used in a single array. One advantage of the low-power approach is that it won’t require frequency coordination.

Broadcast sports will be a major market for Alteros, Green notes, particularly as the breadth of sports genres continues to expand: “We’re all going to the next level now.”

MPEG-H To Be a Core Codec of the Next Olympics

Fraunhofer, developer of the MPEG-H immersive-audio format, also had some news to share at the show. The format is moving toward inclusion in the immersive-audio component of the DVB Europe-based consortium’s standard for broadcast transmission of digital terrestrial television. Robert Bleidt, GM, audio and video codecs, Fraunhofer USA Digital Media Technologies, says that development and testing is under way for the MPEG-H commercial module specification. DVB will sanction a number of audio codecs as part of its immersive specification, with individual countries choosing which ones their national broadcasters will adopt.

In addition, MPEG-H, which in April was announced as South Korea’s next TV standard, will be the core multichannel-audio codec for the 2018 Winter Olympic Games in Pyeongchang, South Korea. MPEG-H is the codec for the world’s first 4K TV system, which will launch in that country in February. Bleidt says the nation’s major networks will use the intervening time to gain operational experience with object-based audio ahead of the games: “They will be in the process of setting expectations for an entirely new audio system.” Four domestic manufacturers — DS Broadcast, Kai Media, Pixtree and Media Excel — have new codec engines ready for deployment.

Over the Top
Also during the show, the AES’s Audio Guidelines for Over the Top Television and Video Streaming (AGOTTVS) technical group, formed earlier this year to study the issues related to audio loudness variations in streamed video content, announced publication of preliminary guidelines, with a goal to develop comprehensive, effective guidelines for managing audio loudness of soundtracks of television and video content delivered to consumers via OTT and by online video distributors (OVDs).

The guidelines, delivered in a paper at the show titled “Preliminary Loudness Guidelines,” have a three-fold mission, according to Jim Starzynski, chair of AGOTTVS: “First, to create awareness in the industry of a developing loudness problem; also, to invite all professional stakeholders to join our ongoing effort to develop more-detailed recommendations; and to supply credible, fundamental loudness guides for actions that can be taken now by content suppliers and distributors.”

Next Year in New York
Also, it was announced that, for the first time in the organization’s history, the 2017 AES Show will share space with another event. AES’s East Coast convention, to be held Oct. 18-21, 2017, in New York City, will be co-located with the NAB Show New York at the Javits Convention Center. The NAB Show New York, whose dates are Oct. 18-19, will run concurrent with the AES event. The two events will occupy adjacent halls in the convention center, with more than 600 exhibitors expected.

“Audio is the expertise of the AES, and NAB Show New York highlights expertise in video and content distribution,” says Bob Moses, executive director, AES. “For today’s media professionals, it makes perfect sense for these two events to take place side by side, complementing each other’s missions, benefiting each other’s memberships, and increasing the opportunities for all attendees.”