The Impresario Who Invented the Movie Theatre 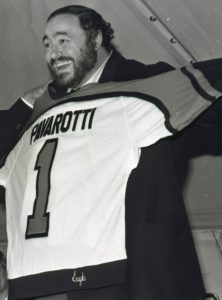 A long time ago, I worked on a television show featuring opera star Luciano Pavarotti singing at the Spectrum arena, home of the Philadelphia Flyers hockey team. The concert was performed between games, so flooring was laid over the ice, and the stage and seats over that. It wasn’t the first time opera had been performed in a hockey arena.

Manru, a relatively obscure opera written by the famous Polish pianist Ignacy Jan Paderewski, had its world premiere in Germany in May of 1901. Less than a year later, it was performed by the Metropolitan Opera at Pittsburg’s Duquesne Garden hockey arena, one of only eight performances in the company’s history [officially, Pittsburgh had no h 1890-1911]. The Met performed five different operas at the Garden that year and another four the next. But that wasn’t Pittsburgh’s first opera at an indoor hockey arena.

The first indoor ice rink in Pittsburgh was at the Schenley Park Casino, where the Casino Comic Opera Company performed. The company was created by Harry Davis, who had previously hosted the Met at his Grand Opera House in Pittsburg, one of several theatres he ran in the city.

In 1896, Davis presented the first projected movies in Pittsburg at his Avenue Theatre, using the Lumières’ Cinematographe (the same day movies were also projected at the nearby Bijou Theatre using the Edison-promoted Vitagraph). By the end of the year, Davis had created his own Zinematographe movie system and used it to shoot a reentactment in Pittsburg of the boxing match between Peter Maher and Joe Choynski in New York (the fact that the same contenders were only acting got around questions of legality of fights). 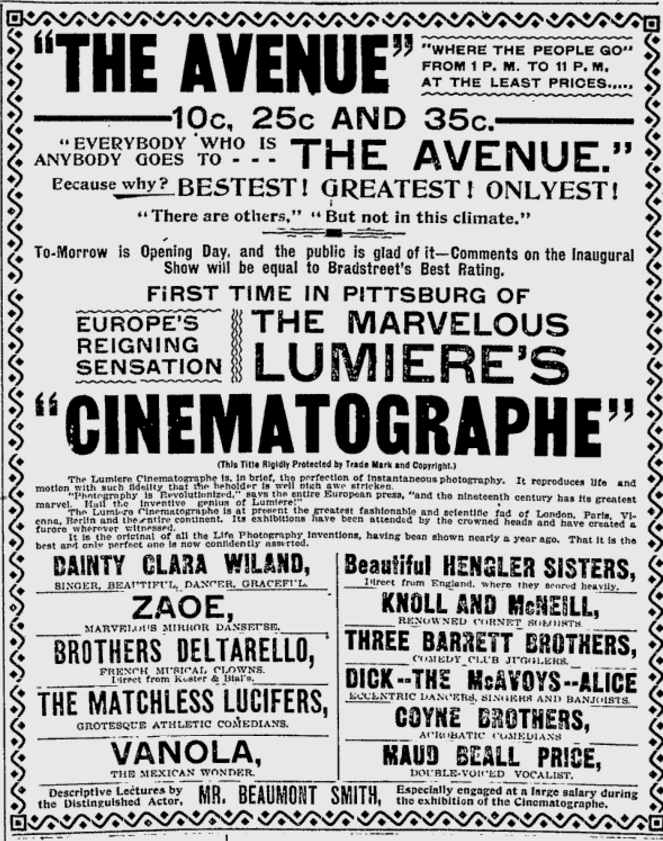 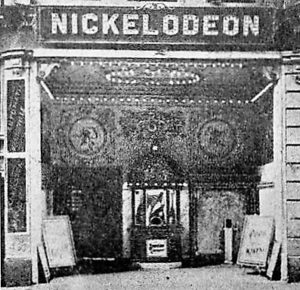 One of Davis’s employees, Richard A. Rowland, who started as an assistant spotlight operator at age 12, suggested showing movies at the Grand Opera House, too. Davis eventually dedicated a room to projected movies at an arcade he ran next to one of his theatres. After the arcade burned down, he, and his partner and brother-in-law John Harris, opened a storefront theatre in 1905, with 96 “opera seats,” dedicated to nothing but projected movies. It was open almost 16 hours a day, but employees (in nice uniforms) worked eight-hour shifts. The admission fee was five cents, so it was called the Nickelodeon.

It was neither the first dedicated movie theatre nor the first place called a nickelodeon, but it was the first long-lasting one, and it was amazingly successful and influential. A Polish visitor who saw it brought the dedicated movie-theatre concept to Europe.  Carl Laemmle, co-founder of Universal Studios, opened his White Front Theatre in Chicago based on the Pittsburgh Nickelodeon. A Pittsburg suit salesperson, Harry Warner, opened a movie theatre in nearby New Castle with his brothers. A jeweler across the street, Lewis Seleznick, went into movie production; his son, David O. Selznick, is probably best known as the producer of Gone with the Wind.

Rowland took over his father’s theatrical supply company and added a film exchange. In 1910, he sold it for “more money than I thought existed” and went on to found companies that became important parts of MGM, Paramount, and Warner Bros. and to run Fox and have executive positions at such other studios as Republic and RKO.  Inspired by Rowland’s success, the Warner brothers opened their own Pittsburg film exchange before moving to Hollywood.

As for Davis, Musical America called him the “impresario of the hour” in 1918 and recommended him for a national “hero medal” for bringing opera to the masses outside New York, Chicago, and Boston and for ticket prices starting at 25 cents.  “I believe in opera,” he said.  “Its medium is a great education for the people.”