On Saturday night, 2017 January 7, the National Academy of Television Arts and Sciences bestowed Technology and Engineering Emmy Awards on Alcatel-Lucent Submarine Networks, the Institution of Engineering and Technology (the IET), and Siemens for “The Concept of Opto-Electronic Transduction,” a fundamental principle of television cameras: the ability to convert variations in light intensity into an electrical signal. The work actually occurred over a five-year period 1872-6.

Alcatel-Lucent Submarine Networks is the successor to the Telegraph Construction & Maintenance Company, where photoconductivity was discovered in 1872, tested, and then announced to the world in 1873. The IET is the successor to the Society of Telegraph Engineers, where the announcement was made, discussed, attacked, and defended. As for Siemens, Werner von Siemens did some of the most extensive testing of photoconductivity, but it was his brother William’s construction and 1876 demonstration of a photometer that started the ball rolling on television research.

William intentionally built the device in the shape of an eye and called it an “artificial eye.” The concept was so shocking that reports were carried in seemingly every publication in the world. The following year, seven or eight people in four countries in three languages began writing about or researching television; before 1877, there was nothing.

The reason the number is indeterminate is that one of the eight used a pseudonym, “Electrician,” and might have been one of the other seven. The piece by “Electrician” about a video system called the Electroscope appeared in The Sun in New York that year and is the earliest known published work about television. It is also said to have been the earliest hoax about television. 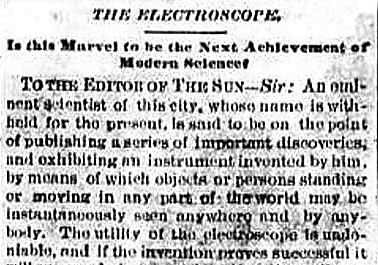 Maybe it wasn’t.  “Electrician” was careful to avoid claiming anything and reported only that “An eminent scientist of this city… is said to be on the point of publishing a series of important discoveries and exhibiting an instrument invented by him….” Who can say he wasn’t? “Electrician” wrote that “the utility of the electroscope is undeniable,” and that’s certainly true of television and video. Most of the rest of the piece was devoted to applications, including making “it possible to represent at one time” in many theaters around “the world, the opera… sung… in any given theatre,” a current activity that prevented my attendance at the Emmy ceremony. 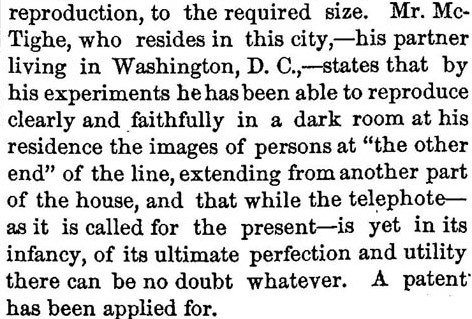 Another supposed hoax appeared in print three years later. The February 20, 1880 issue of American Manufacturer and Iron World, published in Pittsburgh, reported that a local patent law firm had applied for its own patents on an automatic telephone exchange and a form of television. The name of the law firm was misspelled (an error common even in business directories of the time), and the report clearly went too far in claiming that one of the inventors stated “that by his experiments he has been able to reproduce clearly and faithfully in a dark room at his residence the images of persons at ‘the other end’ of the line….” But would a law firm have allowed a totally false report in a local publication without making a fuss? They did get the patent on the automatic telephone exchange.

A report in The Electrician, a London publication, on April 3 of the same year, also mentions the patent application but doesn’t claim successful transmission by that point. It says simply that “The inventors believe that two persons talking by telephone will also, by their device, be able to see each other and that a printed or written document can be seen in this way and read off.” Given that a claim of an achieved “crude” video image was published the previous year (and not considered a hoax) suggests that there could, indeed, have been a patent application. That the patent wasn’t issued could have been due to the earlier report. 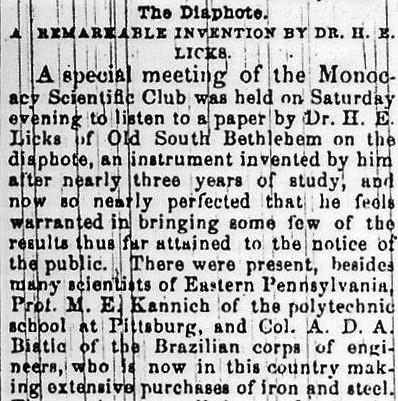 Of the three 19th-century reports of television commonly described as hoaxes, one clearly was. It was a report of the invention of a video device called a “diaphote” that appeared initially in some eastern-Pennsylvania newspapers in early 1880 but was picked up elsewhere around the world.  The names give it away: H. E. Licks (helix), M. E. Kannich (mechanic), A. D. A. Biatic (adiabatic), L. M. Niscate (lemniscate). “Licks,” a pen name of engineer and author Mansfield Merriman, called it a hoax, himself, in his 1917 book Recreations in Mathematics. 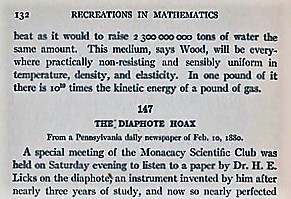 In 1878, there was a depiction of “Edison’s Telephonoscope,” a supposed television system. It was fake, too, although coincidentally Edison did file a patent caveat for a telephonoscope earlier that year; it was to be a binaural ear trumpet, with nothing to do with video or even electricity. No one called the supposed television telephonoscope a hoax because it was obviously a spoof. It appeared in a humor publication (an “Almanack” published by Punch) in a series of images that also showed people floating thanks to “Edison’s Anti-Gravitation Under-Clothing.” 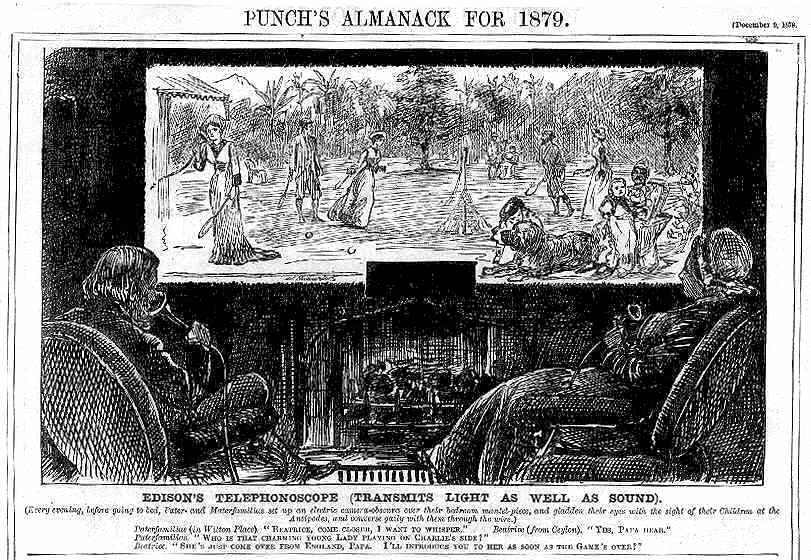 So? One of the most detailed real early television proposals appeared under the heading “Seeing by Electricity” in the publication Nature on April 22, 1880 from scientists John Perry and William Ayrton. What stimulated their research?

They described early work on photoconductivity before revealing their true source of inspiration. “The plan,” they wrote, “was suggested to us some three years ago more directly by a picture in Punch.”