And how could they not be? Doubling the height of the previous scoreboard, the new 57ft by 120ft LED video display comfortably ranks among the top 10 largest in college football. 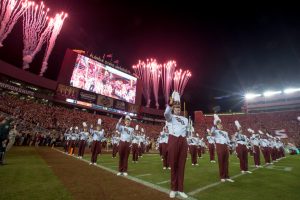 Bragging rights matter in sport. FSU knew they had to go big or go home—in picture quality, as well as board size. The 1080-pixel screen delivers one of the best picture qualities available. From wherever fans sit in the stadium, they can see every touchdown and every replay in high-definition detail.

Big Goals, Short Timeframes
FSU set themselves a considerable task—designing, building, and installing a large-scale video scoreboard and twelve 1080-pixel ribbon boards in just six months. Panasonic was up to the challenge.

Beating out the competition to win the project in late February 2016, the Panasonic team offered a creative installation solution. It promised to have the screens live before pre-season scrimmages that August.

“The Panasonic team was the right choice for this project,” confirms Dennard. “They weren’t the cheapest or most expensive, they were the best.”

The clever installation strategy still had some tricky hurdles to negotiate. The team had to demolish the bathrooms and open up the walls to reinforce the existing steelwork before replacing the facilities good as new. Throw into the mix a multi-million- dollar renovation, 100-degree heat, and having to work around coach Jimbo Fisher’s schedule, and Panasonic had their work cut out for them.

“We had engineers and construction workers wedged into one space, and local labor was seriously stretched,” recalls Dennard. “It was a hectic procedure, but Panasonic took it in their stride.”

Delighting Fans, Attracting Sponsors
It’s too early to report official numbers, but Dennard noted a surge in fan numbers. He contributes this in part to the stadium’s new video capabilities. This past season, FSU held their first Friday night game in over 50 years, had four games streamed on national television, and held their first ever concert.

“The screen has captivated the town,” notes Barry Belsky, Senior Solutions Manager at Panasonic. “You can see it a mile down the road! It’s impressive and people have come to see it for themselves.” And the video boards aren’t just capturing fan attention: advertisers are just as hooked.

In the space of six months, Doak stadium upgraded from tri-vision boards to offering full digital capabilities. Advertisers can now have their brand featured in stunning HD around the whole stadium—and outside it. From its four-story perch, the back of the scoreboard offers prime advertising space facing out to the road.

“The boards have allowed us to activate the stadium in a new way,” Dennard shares. “Advertisers can do a full stadium takeover. It’s drummed up some major sponsorship interest.”

Creative Solutions, Spectacular Results
Digital stadium revamps like this are a growing trend among college stadiums. It’s not cheap, but the opportunities for increased revenue with new advertising streams and heightened fan engagement more than justify the cost.

But creative engineering solutions, like the one Panasonic offered FSU, can help stadiums reach spectacular results at a much-reduced cost. “Choosing the right engineering partner is critical,” affirms Belsky. “You can’t prepare for everything. You need a company that’s flexible to adapt once installation has begun.”

FSU quickly discovered the benefits of having a nimble engineering company on their team. From torrential rainstorms to handling an operating system change mid-stream, Panasonic had the expertise and can-do attitude to sail smoothly over each unexpected hurdle. And the team completed the project with time to spare.

The videoboards were fully lit-up for the first game of the season. Facing off against Charleston Southern, the Seminoles’ spectacular 52-to-8 win rippled around the stadium in gloriously high definition.