With direct-to-consumer paid services taking off, the people at Poker Central, a video-heavy poker website that launched in 2015, knew it was time to up their game. Sports fans were well-served by pay TV and over-the-top (OTT) offerings, but what about poker lovers? There is poker on TV but not nearly enough for the many poker enthusiasts out there, they reasoned. To satisfy that demand, Poker Central launched PokerGo, bringing the best live and on-demand gaming directly to fans. The service launched in late May and goes for $10 per month, $99 per year.

PokerGo’s big draw is the 100-plus live poker days it will bring viewers in its first year. That means major-tournament coverage that isn’t available on broadcast or cable. The service’s first live coverage was the Super High Roller Bowl at the Aria Resort and Casino in Las Vegas. Subscribers will be able to watch the World Series of Poker in July, as well as other World Series of Poker events throughout the year. PokerGo’s agreement with the World Series of Poker and ESPN allows it to stream events that aren’t broadcast by ESPN. PokerGo and ESPN will work as a team, driving viewers to each other’s feeds. PokerGo is expected to announce more live tournament coverage this summer. 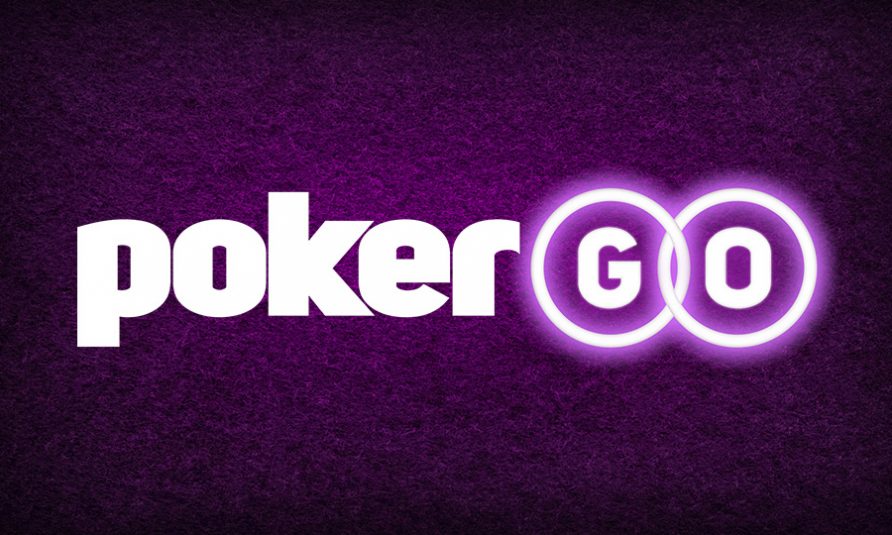 “Live is really the linchpin for the service,” says J.R. McCabe, chief digital officer, Poker Central. “And there will be more programming added literally every quarter.”

Viewers don’t need to tune in to the live coverage; every PokerGo event will be available on-demand within 24 hours. Subscribers who missed a game can log on and watch it.

PokerGo is also offering roughly 125 hours of on-demand video, including both original and classic series. One of its new programs is Dead Money, a documentary miniseries about Matt Berkey, a finalist in the 2016 Super High Roller Bowl. Original series Pokerograpy tells the backstory of famous poker players.

“The bull’s-eye for us is the live tournaments and live programming that’s exclusive to us. But then, all around that, when you come in on days when we don’t have live programming, [you can] find really, really cool original programming that speaks to a poker fan but is told in a quality that people who are consuming video and TV expect,” McCabe says. “I won’t, for the record, compare us with 30 for 30, but, in my mind, we have a feel of the 30 for 30 style in Dead Money.”

The company’s most surprising videos are still to come: PokerGo will soon debut both an original sitcom and a show about relationships, although it isn’t offering details on either. But it is streaming some classic series on-demand, including Poker After Dark, Face the Ace, and Doubles Poker Championship.

The team behind PokerGo is using social platforms to spread the word about the new service. For example, on the first day, its Super High Roller Bowl coverage streamed free to anyone. The company also live-streamed the event over Twitch, giving that gaming audience a feel for PokerGo. On Facebook Live, PokerGo had Poker Central Senior Editor Remko Rinkema host nearly live coverage of the event (there was a 30-minute delay), providing glimpses of the action and engaging with viewers. Opening-weekend activity across all platforms totaled more than 925,000 views and more than 560,000 unique viewers. PokerGo is expected to use social platforms to spread the word on all its live event coverage. 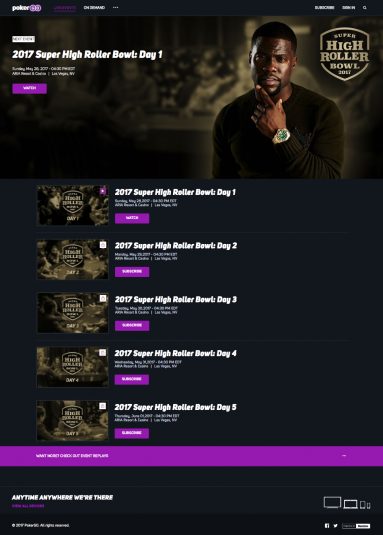 Schedule for the inaugural event on PokerGo

PokerGo’s $10-per-month price comes off as a little ambitious, considering that both Netflix and Hulu start at less than that. The company’s research, however, indicates that there are 100 million casual and hardcore poker fans across the world, with 45 million to 50 million in the U.S. The PokerGo team thinks the price is consistent with other sports-streaming services and notes that subscribers can save money by taking the yearly option, which effectively drops the monthly price to $8.33.

At launch, PokerGo is available through Apple iOS/tvOS and Android apps, with Roku, Amazon Fire, and game-console support coming in the near future. Live event coverage will be produced by Poker Productions, with NeuLion providing turnkey streaming service.

PokerGo may have just launched, but McCabe already predicts a winning hand. “We believe we’re in a space that has not been well-served in the past, and we’re very bullish on the long-term future,” he explains. “We believe that the best events and original content will be what this product is judged upon in the end, and we’ve put together the partnerships that will allow us to succeed.”