IBC 2017: The Sounds of Convergence

IBC 2017 is in the books. By many accounts, it wasn’t so much audio-light as simply reflecting the fact that sound and picture increasingly act as a single entity in a networked, data-based era.

That was evident in presentations like the one given by “presence” authority Matthew Lombard, associate professor, media studies and production, Temple University. He addressed the topic of audio and, specifically, binaural sound, stating, “The sense of presence in music is a fascinating study and especially the question around how you can use presence as a guide to designing an effective recording.” An example cited was Turning Forest by the BBC, described as pairing relatively low-quality video with extremely high-quality 3D audio recorded using 20 microphones on-location in a forest.

“Presence does not require every sense to be full bandwidth or maximum fidelity,” said Lombard. “There are plenty of examples where one low-quality sense allied to a high-quality sense results in very high interactivity. Humans are very adaptable.”

The Innovation Awards at IBC 2017 also acknowledged advances in broadcast audio. Dolby received the IBC International Honor for Excellence for 50 years of innovation in audio. (Founder Ray Dolby presented one of the technical papers at the very first IBC in 1967.)

BT Sport won the new Content Everywhere category, for its multi-layered coverage of the UEFA Champions League final. The other finalists in this category included Arena Television, for the all-IP Ultra HD remote-production truck used by BT Sport for its Champions’ League coverage.

There was also an award category for Exhibition Stand Design: each year, IBC gives three awards for the most attractive, practical, and effective exhibition stands. This year, the award for Best Use of Shell Scheme Space went to Blue Lucy for its fun and eye-catching graphics, but Foam Conversion Audio was highly commended.

There were also plenty of audio product introductions and demonstrations to keep the ears entertained at IBC 2017. Here are a few. 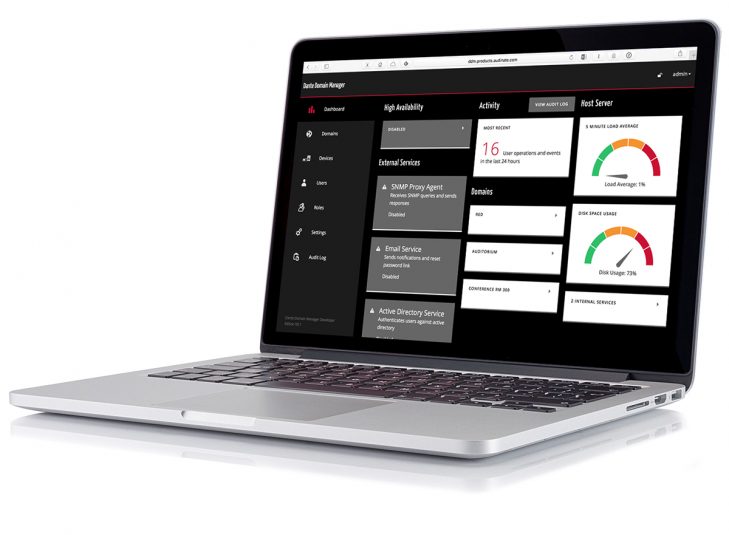 Audinate announced the release of Dante firmware v4.0 for its Brooklyn II audio-networking module. Delivering critical support for Dante Domain Manager (DDM), along with performance improvements and bug fixes, the release allows manufacturers to immediately provide field upgrades for existing products to make them DDM-ready. The Dante 4.0 firmware is standard for all Brooklyn II modules shipped by Audinate beginning early the fourth quarter.

Brooklyn II v4.0 is a key component in the Dante 4.0 system update, which will implement Dante Domain Manager support across the Dante ecosystem. Only products updated with the v4.0 firmware will be able to fully participate in Dante Domains. DDM is a virtualized application that runs on Windows and Linux desktop and server platforms.

HARMAN Professional Solutions
Unveiled at IBC 2017, the Studer CoreLink Card is the world’s first broadcast-audio–mixing core to run on commercial-off-the-shelf (COTS) servers. Featuring a standard PCIe short format, the all-new CoreLink Card removes the need for custom hardware, leveraging the processing power and hardware that already exists in many broadcast studios and production trucks. Customers can select COTS servers independently, allowing them to remain consistent with the rest of their infrastructure and save time during setup, configuration, and maintenance. Since COTS servers are general in purpose and much less expensive than custom-made hardware, the Studer CoreLink Card enables broadcasters to leverage existing servers within their facilities or purchase readily available servers with the required processing power.

Stage Tec
The new AVATUS IP mixing console differs from Stage Tec’s previous consoles with three innovations. First, it offers an IP-based connection to the audio processor. Second, AVATUS 21 is equipped with 21-in. multitouch screens for display and control functions. Third, Stage Tec offers workflow-oriented operation in AVATUS, in which only the relevant, context-related functions are displayed on the touchscreens.

Stage Tec also presented the latest NEXUS interface board: the Router Interface AES67 (RIF67). The expansion board for the NEXUS STAR is the first result of cooperation with DirectOut Technologies agreed to at prolight+sound in April. The DirectOut AES67.IO module has a full AES67 implementation and supports non-proprietary audio and control networking. The RIF67 can send and receive up to 1,024 AES67 audio channels and supports up to 128 streams in each direction. The module provides a capacity of 256 channels in the router and can manage up to four physically separate IP networks per board. Redundant audio transmission according to SMPTE 2022-7 is also planned. RIF67 is configured using a web interface, with status monitoring via NEXUS. The RIF67 is plug-and-play, which means that networks detect and configure it for use automatically.

Sennheiser
Previewed at IBC 2017, the FOCUSMIC Digital, a mini-shotgun microphone intended for high-quality videography with the iPhone, plugs directly into its Lightning port and delivers high-quality, focused audio from the direction of filming. The new mic attaches via a metal grip that can accommodate a variety of iPhone models (from SE and X to 8 Plus) and case designs and also allows the mic to rotate through 270 degrees, including a selfie position and a transport position. FOCUSMIC Digital will be available in Q2 2018.

Solid State Logic
The brand-new System T – S300 compact broadcast console offers a combination of performance and value for a wide range of broadcast installations and remote-production vehicles. The fixed-layout compact control surface can be combined with the complete portfolio of SSL’s System T network objects: consoles, remote tiles, touchscreen interfaces, Tempest Processing Engines, remote PC software, and network I/O. It can be specified as part of a larger System T installation or in standalone configurations for smaller broadcast facilities or remote-production vehicles. The S300 comes in two versions: 16+1 faders and 32+1 faders. S300 can connect to either a Tempest T25 (256 paths at 48 kHz) or a T80 (800 paths at 48 kHz) Processor Engine and runs the same software as the larger S500 surface and TCR (Tempest Control Rack). System T uses AoIP as its core, not simply as an edge connection to the console’s audio infrastructure.