Last night’s season opener may not have ended the way the defending champion Golden State Warriors had envisioned (with a loss to the Houston Rockets), but the night sure opened with a load of pomp and circumstance. The 2016-17 champs received their rings in front of a raucous crowd at Oracle Arena in Oakland, and Turner Sports was there to capture the moment in a unique way.

The network worked with the NBA and the Warriors to bring both a Steadicam and a jib camera onto the court, placing them in a position where they’d never before been allowed during this type of event. 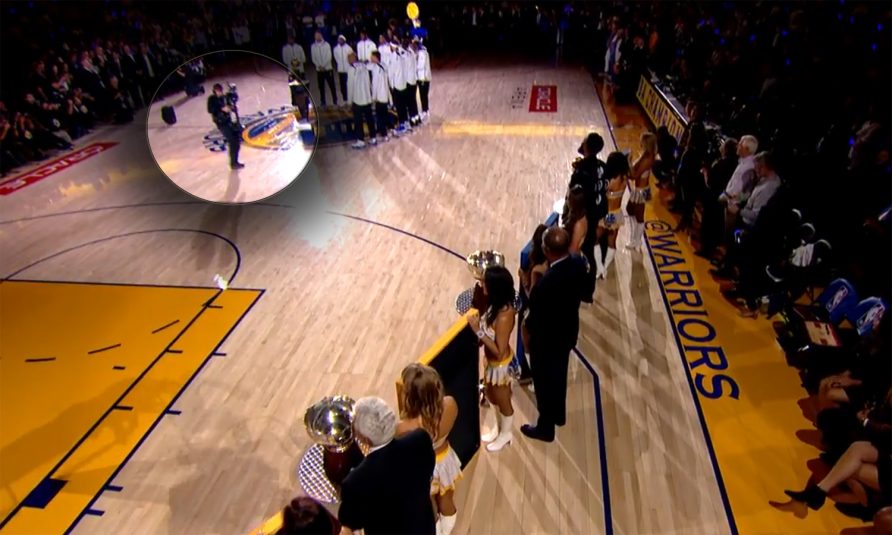 Turner Sports was able to take a Steadicam (pictured) and a jib onto the court to cover the championship-ring and banner*raising ceremonies for the Golden State Warriors on Tuesday night.

Turner spent the final weeks of the offseason coordinating the effort with the Warriors and the league to pull off the challenging task. Courtside can be a very crowded place during a ceremony like this, with players, cheerleaders, executives, former players, and more participating in the ring ceremony and banner-raising. It was well worth the effort, though, according to Turner, which wanted to bring a true big-time feel to the celebratory moment.

“The NBA is awesome about letting us experiment with new technology,” says Steve Fiorello, VP/coordinating director for Turner Sports. “Anytime we throw an idea out there, they are willing to give it a shot.”

Tuesday night’s efforts are likely to set the tone for a fun season of NBA production at Turner Sports. Attention to in-studio enhancements and audio were a big focus of the offseason.

In the studio, for the wildly popular Inside the NBA, Turner has introduced a sparkling new 16- x 30-ft. LED wall. A large videoboard is a signature part of the program, used regularly by analyst Kenny Smith to diagram plays and break down player/team performances. This new digital board boasts an ultra-sharp image at 2.9 mm.

“The 2.9mm is going to drastically increase the resolution of the video that Kenny is trying to break down,” says Fiorello. “I can’t wait to put it on the air. It looks amazing.”

The production crew has slid the board a few feet up, further integrating it into the studio. There are also plans to use it as a bit of an entrance way for special guests joining the show since there’s a space between the wall the anchor desk.

In the truck (Turner Sports uses primarily NEP SS18 and TS2), the network also made a big offseason acquisition, bringing aboard a new director in Andrew Greathouse. Coming over from the Big Ten Network and Fox Sports, he will be one of the top directors in Turner’s NBA stable this year and directed last night’s Rockets-Warriors season opener.

“We are throwing him into the fire,” laughs Fiorello, “but we have all the confidence in the world in him. We can’t wait to see him go.”

On the audio front, Turner is planning to put a different focus on its approach this year. Although the network regularly places microphones on coaches, players, refs, etc., to take viewers into the heat of the action, Fiorello says the network’s team spent the summer examining how it acquires the natural sound of the sport.

“We are constantly trying to upgrade our audio,” he explains. “This year, we are going to try to be more aggressive with the natural sound in the [arena]. We looked at our audio, and we feel that that’s an area where we can really step forward. It’s not so much adding more microphones as looking at our philosophy for how we mike things in acquiring the overall audio and making fans feel more like they are at the arena.”