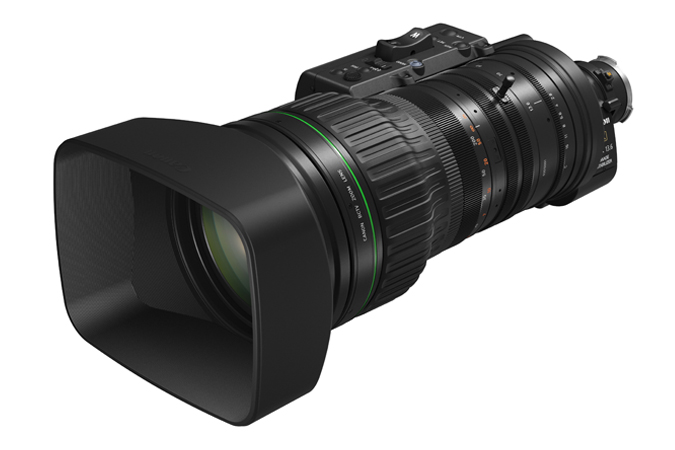 The Canon CJ45ex9.7B and CJ45ex13.6B lenses both feature a broad 45x zoom ratio and wide-angle focal length of 9.7 mm to 437 mm and 13.6 mm to 612 mm, respectively. Both telephoto zoom lenses are ideal pieces of equipment for Electronic Field Production (EFP) broadcast applications including wildlife/nature, sports, live events, documentaries, and helicopter/aerial. Additionally, both lenses are well suited for mid-size broadcast vans and surveillance applications.

“As the demand for more 4K UHD broadcasting continues to grow, Canon is constantly developing high-quality products to provide producers and broadcasters with outstanding optical performance,”says Yuichi Ishizuka, President and COO, Canon U.S.A. “The CJ45ex9.7B and CJ45ex13.6B both support a variety of broadcast applications, enabling users to capture breathtaking 4K UHD image quality in a form factor that is both lightweight and compact.”

The CJ45ex9.7B and CJ45ex13.6B both employ Canon proprietary optical design technology that features optimal lens positioning using both fluorite and Ultra-low Dispersion (UD) glass. The use of these lens elements enable users to capture high-quality 4K UHD imagery from the center of the imaging field to the periphery and across the entire zoom range, making them ideal for a variety of shooting situations — from close-up shots all the way to wide shots such as panoramic views of large venues.

The form factor and operational controls of the lenses will be very familiar to users who have previously operated one of Canon’s award-winning HD lenses. The lenses are designed to meet the demands of the on-the-go broadcast shooter where lightweight and compact are key advantages, comparable to HD super telephoto lenses. Both lenses feature three 20-pin connectors for zoom control, focus control and access to the virtual terminal, even in full servo setup with focus and zoom controllers connected. Futhermore, a 16-bit absolute value encoder in the digital drive unit helps eliminate the need for any initialization, enabling users to simply turn on the camera and begin shooting.