The Anthem opened with a bang on October 12 when the Foo Fighters hit the stage of the first mid-sized venue built from the ground up for music in the Nation’s Capital. The 57,000-square-foot, $60-million venue is hosting arena-level bands and artists that want a smaller, more intimate space in which to connect with fans, but that can still hold plenty of them. That means that The Anthem needed high-end, rider-friendly sound, and that’s exactly what it got when it bought two DiGiCo SD12 digital mixing consoles through Eighth Day Sound for its FOH and monitor positions. 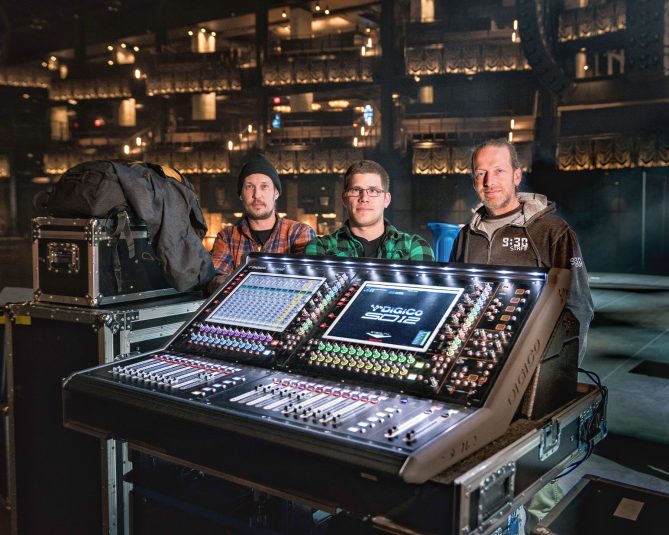 The Anthem is the major new venue grabbing national attention, one that can attract both top-tier touring bands and up-and-coming artists with a combination of world-class technology and big-market capacity. The venue, on D.C.’s southwest waterfront, can be configured to seat or stand a variety of crowd sizes from 2,500 to 6,000, so it can adapt to the needs of touring artists who are trying to maximize both their schedules and connectivity with their fan bases. At the same time, if they need to, those same top-level artists could literally send their trucks on to the arena in the next city and just walk on stage at The Anthem, where a d&b audiotechnik J-series line array system and the DiGiCo SD12 consoles await them.

“That was the thinking when we made our technology choices,” explains Chris “Sherman” Robb, the technical director for independent concert promotion and production company I.M.P., which also owns D.C.’s iconic 9:30 Club—home to a DiGiCo SD8 for FOH—and operates historic Lincoln Theatre, as well as Maryland’s beautiful and storied Merriweather Post Pavilion. “We have an enormous amount of experience when it comes to knowing what touring artists want and need, and what it takes to make a venue the best it can be for a wide range of shows. The DiGiCo SD12 was the perfect choice for The Anthem.”

The list of artists to perform at The Anthem in its first few months of operation—including Bon Iver, The National, The War on Drugs, Lorde, Kurt Vile, The Killers, Trombone Shorty and Phil Lesh—attests to that. “The SD12 is a good fit for The Anthem—it has a small footprint and we don’t have to strike it as we configure the room for different artists and types of shows,” Sherman says.

“At the same time, this is a console that most of the artists that play here are used to. It’s part of a full production package that we designed—sound, lighting, rigging, et cetera—that would let even the biggest artists just plug in and play.

“Plus the SD12 is upgradable, and with the Optocore and MADI interface, we can connect with anything that artists can bring in. When we compared the functionality, sound and price point with other desks on the market, the SD12 was the clear choice. With artists of this caliber, this is what The Anthem needed.”

Reigate Baptist Church in Surrey has recently invested in a DiGiCo S31 digital mixing console, purchased through sales and installation company, Stage Electrics, as part of a complete audio upgrade. 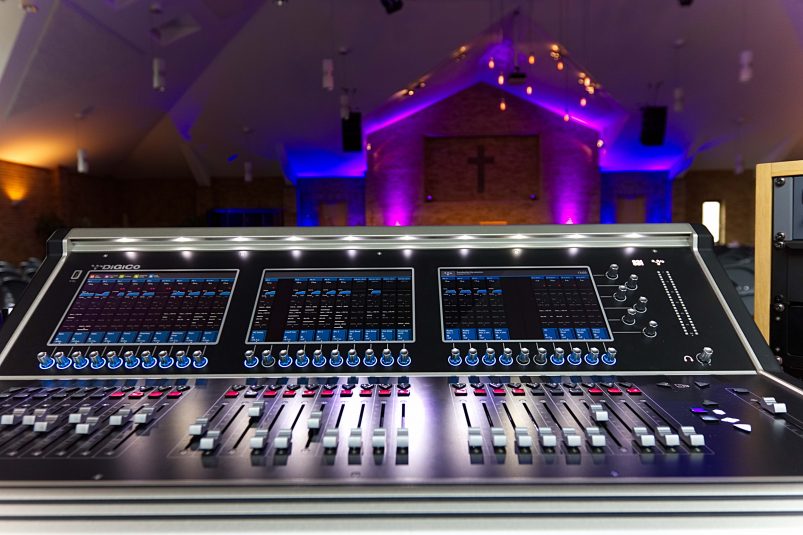 “Stage Electrics’ Jamie Gosney introduced DiGiCo to us a couple of years ago, and we instantly loved everything about the consoles,” says Matt Kefford, the Church’s Gathering Pastor, who was also in charge of overseeing the upgrade. “They’re great desks, they’re easy to use they, have a great sound and you have the option to upgrade software, which keeps them bang up to date.”

Kefford’s first DiGiCo experience was on an SD9, which Jamie had taken to the church to demo.

“It’s a really good console, but we’re a church, we have to be wise with the money that is made available to us and the SD9 was a little out of our price range,” says Kefford. “Jamie suggested we look at the S Series consoles and we decided that an S21 would work for us. But then the S31 was launched and it was a no brainer for us to opt for that. The extra screen made complete sense as this is a fixed installation and we are using most channels most weeks, so to have all of them across the three screens is just superb. It makes it really easy to use and you have everything at your fingertips.” 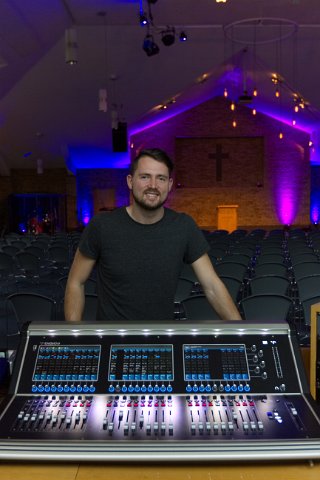 Whilst Kefford has experience as a sound engineer, the church has various clients using the facilities who do not have the same experience, so ease of use was a prime consideration in his console choice.

“With the S31, the caretaker simply comes in and puts the right settings on the console for whatever client we have in,” says Kefford. “Then the desk automatically links to our old microphones, so that if a school comes in to do a concert and they drop a mic, it doesn’t really matter. Also, they aren’t affecting any of our settings, so when we come in on a Sunday, everything is perfect and ready to go, which is phenomenal. I know that’s the advantage of a lot of digital desks, but having the layout and the structure of the S31 as it is makes it very easy to use. There have been several times when things haven’t gone to plan and I’ve been able to talk people through it over the phone just by picturing where they are on the screen. The S31 is so intuitive and easy to remember, and I’ve been able to solve a lot of problems while I’ve been on the motorway.”

Kefford has trained on the S31 and has played key role in setting it up, which has been helpful and has meant that teaching those that are less experienced has been straight forward, something for which he is grateful since the church has found that since it has had the S31, it has never had so many people wanting to serve on the sound team.

“I am not saying it’s just because they have seen the desk, but there is definitely something to be said for having decent equipment,” smiles Kefford, “And, since we’ve had the new system, more people have wanted to get involved in the worship team. I think when people see things are done well then, they want to be a part of that. In fact, we have one girl here who had never done anything with sound before, but really wanted to be involved. She started watching videos on YouTube, watching the other sound engineers every week and she’s been to DiGiCo HQ for a demo. Now she’s running the desk on her own, which is wonderful to see.”

DiGiCo SD-Series Consoles Added at Liberty University, Thomas Road Baptist Church
Thomas Road Baptist Church, begun in 1956 by a group of 35 worshipers and since grown to more than 24,000 members, was also the foundation 15 years later for Liberty University, today the largest evangelical Christian university in the world and the largest private non-profit university in the United States. Both have made extensive use of media technology as part of their evangelical and educational missions, and now both are in the process of replacing their entire complement of main audio mixing consoles with DiGiCo SD-Series desks. 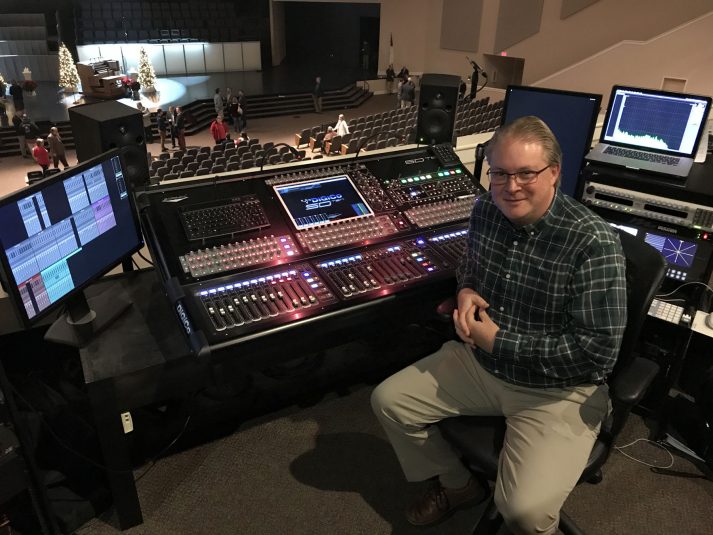 At Liberty University, the college’s newly expanded School of Music, which merged Liberty’s Department of Music and Humanities and the Department of Worship and Music Studies into a large, comprehensive, and world-class university music school into a new building, has installed a DiGiCo SD5 and SD10 for front of house and monitor mixing in the building’s performance hall, and a DiGiCo SD11 in the department’s mixing lab, where students are taught to mix on a professional console.

At Thomas Road Baptist Church, two DiGiCo SD10 consoles now serve as the FOH and monitor mix platforms in the 6,000-seat sanctuary, which opened in 2016. All of these new DiGiCo SD-Series consoles were purchased and installed over the last 18 months through Pro Sound & Video of Pensacola, Florida.

In addition, two DiGiCo SD10 mixers were also recently delivered for Liberty University’s Event Production department, where they will be available for Convocation, North America’s largest weekly gathering of Christian students, and for deployment for a wide range of applications across the university’s event venues. 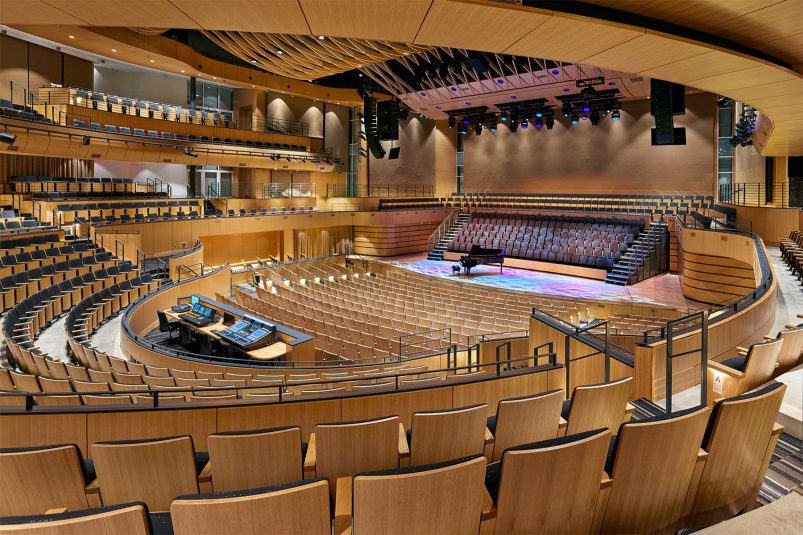 The new DiGiCo SD-Series consoles replace another brand’s consoles previously used for FOH and monitor mixing in the school’s and church’s various venues. It was time, says Michael Gerringer, AV Architect/Manager, Event Support, Large Venues, Content Delivery, for Liberty University’s Infrastructure Media Operations, for a sweeping change. “We needed to become more road ready, more rider ready, to meet the needs of contemporary music performances,” he explains. “Also, we wanted to be able to run Waves plug-ins in an integrated digital-audio environment. This would enable us to streamline our workflows at the University and Church and integrate with other systems connecting over Dante.”

Gerringer cited benefits that come with DiGiCo’s SD consoles, such as the high degree of flexibility when it comes to configuring the consoles’ work surfaces and I/O matrixes. “Routing is incredibly easy, and we can set it up so that we have the input channel and the output wherever it’s most convenient for each user,” he says. 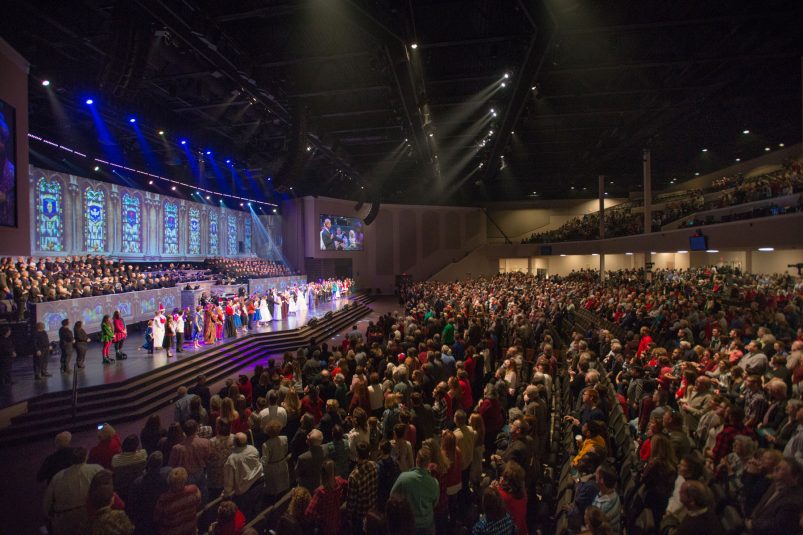 The SD consoles aso offer virtual soundcheck functionality that goes beyond live performances, allowing users to tweak live recordings that will add to the school’s and the church’s inventory of media content and training possibilities.

In particular, the SD11 serves a very foundational function, as the teaching platform that will introduce Liberty University media-arts technology students, many of whom will go on to develop their skills further in the church’s venues and the Event Production department, to a real-world mixing environment.

“The SD console has changed how I mix,” says Gerringer, who also mixes front of house at Thomas Road Baptist Church. “The SD sound is cleaner and clearer. I’m not spending time fixing the sound—what I put in is what comes out. It’s incredibly transparent sounding. It’s a game changer for us.”