The network and union failed to come to an agreement, resulting in the walk-out in Honolulu on Sunday

Technical crew and camera operators belonging to the International Alliance of Theatrical Stage Employees walked out on Golf Channel’s production of the Sony Open in Honolulu on Sunday over stalled contract negotiations. The walk-out led to Golf Channel’s presenting limited coverage of the final round at the Sony Open and two other events in the Bahamas and Florida. 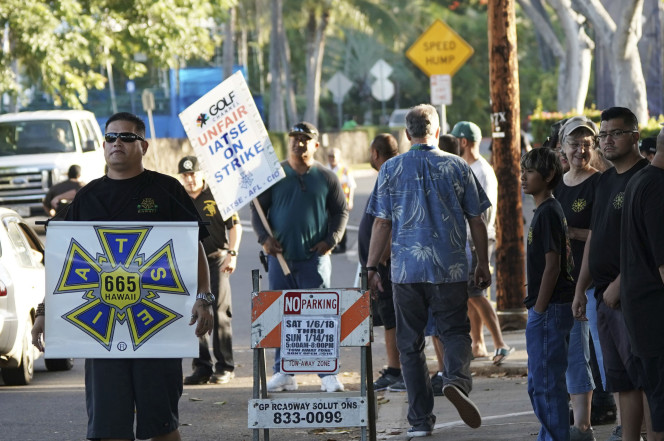 Members of the IATSE picket outside the entrance to Sony Open on Jan. 14 in Honolulu. (AP)

According to a Golf Channel statement, the network has been negotiating an agreement for nine months with the IATSE, which represents the technicians who handle live tournament productions.

“Those efforts have not yet yielded a resolution, and we look forward to reaching a mutually agreeable contract,” read the statement. “However, some technicians have chosen to walk off the job today. We have contingency plans in place and will continue to deliver coverage.”

More than 30 IATSE members from Local 665 picketed outside the main road into Waialae Country Club in support of Golf Channel’s technical crew. John Culleeny, a representative of the union, told the Hawaii News Now that the union had been in negotiations with Golf Channel for nine months but no agreement had been reached. After the latest proposal from the network was rejected by union members, last-minute talks broke down, and union members walked out on Sunday.

“The biggest issue is the fact that Golf Channel wages are below industry standard, below what other people are making,” Culleeny told Hawaii News Now. “We have people who are stay-at-home, work regionally in San Francisco, San Diego, Los Angeles, Phoenix, New York, whatever. They make more money than people who go on the road for the Golf Channel. And they have to leave their families, stay in a hotel room for weeks at a time, and they’re getting paid less than people who stay home. We want parity.”

Golf Channel will produce three tournaments next week: the CareerBuilder Challenge, another Web.com Tour event in the Bahamas, and the Mitsubishi Electric Championship, a PGA TOUR Champions event on the Big Island of Hawaii.