First Base to Primo Basso

originally published in 2014, this might be nice while both opera houses and ball parks are closed

I know of only one person who gave up an opera career for baseball, but there seem to have been many who have gone in the opposite direction. 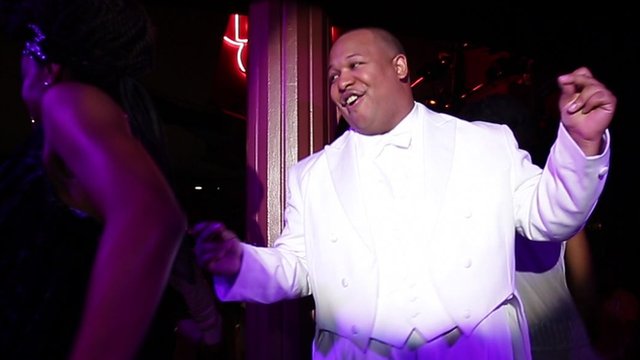 On Site Opera is a New York City company that specializes in site-specific productions. Last year, they did Gershwin’s jazz opera Blue Monday at the Cotton Club, and some of the publicity — including a piece on BBC TV  — related to Clayton Matthews, a baseball player turned opera singer. Like Matthews, Michael Adams and John Fowler both switched from baseball to opera after injuries.

Semi-pro pitcher Robert Merrill (whose teammate was Boston Braves great Tommy Holmes) went on to sing almost a thousand performances at the Metropolitan Opera. Kansas City Athletics pitcher Ara Berberian (left) sang a mere 334 there. Charles W. Barnum and Michael Fabiano had each been a professional umpire before turning to opera singing. 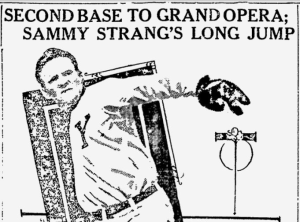 In his 1914 book Busting ‘em, Ty Cobb (himself a performer on opera-house stages) wrote, “‘Sammy’ Strang, for the benefit of those who don’t know, was a Big League ball player, but he quit the game some time ago to study abroad for grand opera.” Not quite. After playing for the Giants and helping them win the 1905 World Series, Strang, for whom the term “pinch hitter” was created (by John McGraw, because Strang regularly got hits in pinches), did, indeed go to Paris to study opera under Jean de Reszke. And he was good enough to get offers from opera companies to sing. But he turned them down to coach baseball at West Point and then went on to manage and own the Chattanooga Lookouts. 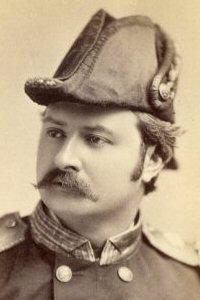 Long before any of those, however, there was the strange case of Signor Brocolini, or, as the great baseball historian Peter Morris titled his paper on the subject in volume 15, number 2 of Nine: A Journal of Baseball History and Culture, “From First Baseman to Primo Basso: The Odd Saga of the Original Pirate King (Tra La!).” Signor Brocolini was engaged by the impresario of the National Opera House in London (Colonel J. H. Mapleson) and was later a “mainstay” of Her Majesty’s Opera Company. He performed in operas ranging from Lucia di Lammermoor to Les Huguenots. Performing as Captain Corcoran in H. M. S. Pinafore, he so impressed Gilbert and Sullivan that they created the role of the Pirate King in The Pirates of Penzance for him. 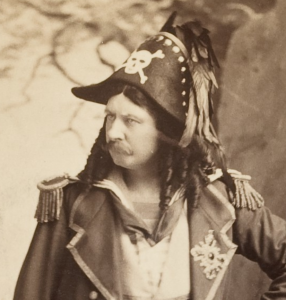 Pirates premiered in New York City on the last day of 1879. If Signor Brocolini related the location, he might have called it Nuiorcasiti; after all, his name came from an Italianization of the place where he lived and worked before embarking (literally) on his opera career: Brooklyn. He was born John Clark in Cork, Ireland.

Starting in 1865, he also served as a director and first baseman of the Detroit Base Ball Club. One of two easterners (and, possibly, professionals) on the team, he was so good that, according to Morris, “most Michigan clubs were unwilling to play the champions. Even a match that pitted the Detroit Base Ball Club against an all-star squad of the state’s best players resulted in another rout.” The easterners left the team so it could play opponents. Clark returned to Brooklyn and started singing, his colleagues raised $5500 to send him to Milan to study opera, and, four years later, it was a glorious thing to be the Pirate King.