The Cisco philosophy has evolved over the years as the IT pioneer looked to ensure that its customers could seamlessly move from one generation of IP equipment to the next. Today, the company envisions a cloud-based environment that enables customers to quickly and cost-effectively spin up a new service, such as an OTT channel.

“Previously, those efforts required a committed business,” says Dr. Ken Morse, SP, video software solutions, Cisco, “but, with cloud services, we have lowered the cost of experimenting and operating those sorts of services.” 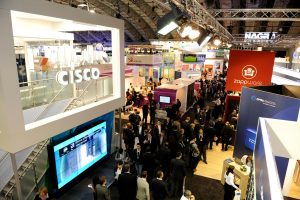 He is the first to happily admit that Cisco has spent much of its time “wargaming” its technologies and trying to break them. The company is also helping change the culture of its customers as, increasingly, the gap between operations personnel and developers of code and software is closing and developers are playing a larger role in operations of a given facility.

“We want to bring something else to the table, and we know that we can replace SDI with IP,” says Morse. “But customers want to see how that will change their business outcomes or their remote productions.”

The key to the future is the concept of virtualized video processing: a production facility with dedicated machines that might do only one function will be replaced by one where those machines can run different software packages depending on the production needs. Cisco is looking to work alongside other industry players — such as Imagine Communications, Grass Valley, and Harmonic — to create a singular platform that can use different components.

“The true promise is in things like the other manufacturers are doing, where they take their products, virtualize them for the cloud, and run on the IP infrastructure,” says Morse. “And now it is all about ensuring that standards will work or not work based on interoperability.”

One of the interesting things to watch will be an industry that transitions from developing, selling, and buying dedicated hardware to one that is more software-focused. And it will most likely take a long time: not only will the vendors and manufacturers need to change the way they approach everything from product design to manufacturing and sales and support, but the potential marketplace will be limited because customers will be in the midst of amortizing existing hardware for a number of years.

“It will change the dynamics and the whole competitive space,” Morse adds.

Given Cisco’s reputation in IT and its 10-plus years of experience with video, the company is already well versed in how the IP transition changes conversations with potential clients. Issues like whether the client wants a private, public, or hybrid system is the starting point, and then it gets to issues like how applications and services will be orchestrated across that platform.

“And then there is making sure there is consistent security across the whole thing, because cyber attacks are a huge concern,” says Morse. “We want to show broadcasters what the IP transition is all about and show examples of how service providers are embracing the IP approach in technologies and the outcome it has for their business.”