It’s pretty clear that, when it comes to going all-in on IP, Imagine Communications has done everything it can to take a leadership position. And, while many vendors at IBC 2016 demonstrated that they were finally getting serious about IP, the Imagine stand showed the fruits of efforts that began years ago.

“We really feel the approach we’ve taken, beginning three years ago when we started working on it from the ground up, now gives us a generation of products built to fulfill our vision of native cloud software platforms that can scale and be flexible,” says Imagine Communications CTO Steve Reynolds. 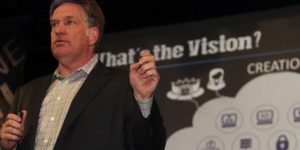 The Zenium platform is the backbone of the efforts: the component-based framework allows functions to be built on top of it.

“It can be as simple as a closed-captioning inserter or a delay buffer or as complex as things like HEVC encoders,” he explains. “Micro-services can be put together to create a software-defined workflow.”

One of the interesting aspects of the move to IP is that, although the concept may be ubiquitous across the halls at trade shows (and, increasingly, within broadcast plants), how it is actually being used can vary widely.

“Everyone can say the same words, but they don’t all mean the same thing,” Reynolds explains. “For some, it is about changing the wire, but that is not the same thing as moving to IP. It’s a wholesale change in the way you build, architect, support, and monitor a plant as you move from a hardware-based model to a software-based model. There is no more custom-made hardware: you are running software on commodity off-the-shelf networking that takes advantages of all of the goodness of the internet: the same protocols, development tools, web-service APIs, and Javascript.”

This move to a world where systems move beyond hardware has Imagine (and others) investing a lot not only in R&D but also in training to help people and organizations understand how to make a hybrid migration. 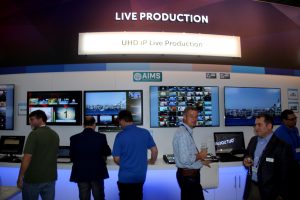 Three years of work on IP-based production solutions has made Imagine Communications a leader in the IP transition.

“Many have large baseband infrastructures,” Reynolds points out, adding, “The industry has never taken an approach that is ‘rip and replace.’ They are building overlays on top of existing infrastructures and gateways to take IP content.”

One question that many are still grappling with is how to monitor, troubleshoot, and verify an IP signal.

“Our approach offers a set of tools for IP that address those questions,” says Reynolds. “The Epic platform is seen by many as a software-defined multiviewer environment, but it is so much more than that. It allows management and monitoring of things like loudness levels and tools to watch the platform itself and see how the infrastructure and network are behaving. And there are tools to look at how the system performs over time, [offering] a higher level of quality control.”

The changes related to the move to IP will affect more than just the engineering department. Moving to IP opens up the move to virtualized computing environments, where the processing power of the computer can be dynamically changed to meet a given of-the-moment need. The days, for example, of dedicated racks of equipment that may be used only for an hour or two a week will increasingly become a thing of the past. And that ripple effect will impact equipment manufacturing, sales, support, and budgeting.

“This is going to cost some of the companies in the industry their business, as they will not make the transition to IP,” says Reynolds. “But that speaks to other opportunities.”

The advantages of a virtualized environment, he notes, include agility and the ability to move faster because everyone is using open and standards-based platforms.

“The ways of doing things have been pioneered by other industries. We’re taking advantage of stuff built by others, and that is giving us the ability to tap into what others have perfected,” says Reynolds. “With off-the-shelf standardized platforms, there is not a lot of mystery, and they are stable platforms that we don’t have to invent.”