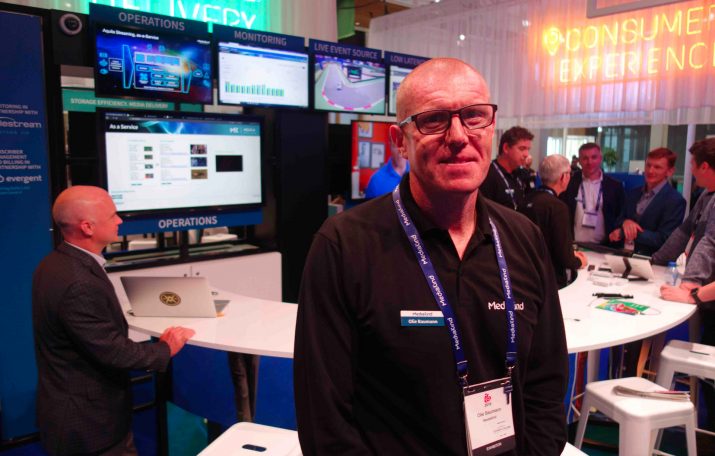 Olie Baumann, head of innovation, on the MediaKind booth in Hall 4 of IBC 2019

MediaKind also introduced a pre-integrated low-latency solution for broadcasters and operators delivering live content to consumers using ABR technology for OTT or streaming services. This leverages ‘direct path’ technology between encoder and packager to reduce the time to move content from one media-processing function to the next.

In Hall 4 at the show, Mediakind head of innovation Olie Baumann took SVG Europe through some of these innovations, beginning with the company’s recent 360° video technology and collaborations.

Olie Baumann: “I’m happy to talk about the 360° stuff until I’m blue in the face! It’s low risk and it’s a managed service; you can spin it up and run it for an event and spin it back down again. You can make money from it as a service differentiator, for telcos for example.

“It gives the fans greater engagement, which is good for the rights holders. Advertising is a massive part of that as well, as there’s more real estate to advertise on. You can get feedback from what people are watching, which is great for personalisation. 360° is all there, and by de-risking it you can do it for one event or two events.”

Can you talk about some of the 360° video applications and partnerships you have been involved with recently?

“With Deutsche Telekom we’ve done three events at this stage. One was a football match. One of the most exciting things for me is that 360° is a technology which we provide, and then the production companies and creatives do something with that technology which is genuinely different. It’s not just an evolution of broadcast, it’s really quite disruptive.

“What they did with the football match was to put a virtual Jumbotron with the standard broadcast feed fed into it: so whilst you are in the virtual environment looking around, above the stadium you’ve got a massive screen you can watch which you would have been watching on your TV at home. And that’s got a whole load of problems around synchronisation and making sure you’re getting everything right – and those are really exciting problems to solve, for sure.”

“The other events we’ve done with Deutsche Telekom are in basketball, which we’re demonstrating here at the show. These were two-camera feeds, so the user could choose between two different streams.

“We’re still learning: the encoding and production is quite new. But one of the things we took away from that is that people prefer to have a curated feed. There’s no replacement for a director. That’s a really interesting outcome.

“We’ve also done a classical music concert from Berlin. There they put the 360° cameras in the orchestra, so as you look around you can see the conductor hovering over you. That feeds into this concept of giving people an experience that they can’t have otherwise, even if they have tickets for the event.

“And particularly when you take sports, it’s something you can then deliver back into the stadium. When we look forward to 5G, where we can have many hundreds and thousands of people connected to access points within a stadium – either with 5G or wifi6 — then you can start delivering alternative views of what they are watching live to tables and mobile phones,” said Baumann.

For the 360° applications you mention, talk us through the technology piece supplied by MediaKind.

“We have a small piece of software which sits on the production PC, communicating with our cloud-encode platform. It’s responsible for managing that cloud platform, as well as for uploading the video.

“So it pushes the video into the cloud and we encode it using our tile streaming philosophy. You can minimise the bandwidth and the decode capability required in the devices – meaning you can deliver it to mobile devices.

“What’s really key for us is this idea of delivering 360° video to sports and music fans – not sports and music experiences to VR enthusiasts. We can deliver to TVs and PCs as well, but delivering to those kinds of devices you’re ensuring you engage with the fans and you’re advertising to the right people.

“We provide an entire cloud platform including the encoding, and then we offload to a CDN – we don’t provide the CDN. We partnered with Akamai for the Deutsche Telekom event as Deutsche Telekom had chosen Akamai. But of course we’ll work with other CDNs as well.

“One thing that’s incredibly important for sports is low latency, as you know. You need to be able to enjoy the goal before you see the tweet! We’re working with some of the new standards for multicast ABR, which means we’re able to push that video to the edge in a timely manner, in a way that enables people to minimise the latency.

“We’ll be able to get down to several seconds latency – for ABR, which is different to broadcast. We’re seeing customers who want to move to ABR for live, but it has a scaling issue, in a number of different regards.

“As soon as you have a hundred thousand people watching the Super Bowl, your network isn’t going to be able to handle sending individualised streams to each person. And there are also, of course, the CDN egress costs associated with that. It can be a very expensive thing to deliver.

“By using multicast ABR within the CDN, to the edge, and leveraging edge processing within the network, we can minimise that latency and deliver a really good, timely ABR service.”

One area that comes into play with your newly-announced MediaKind Universe portfolio is remote production — certainly one of the hottest topics at this show. How do you see that trend developing, from the MediaKind perspective?

“We’re starting to see cameras now that have SMPTE 2110 and SRT coming out of the back. That’s a big shift. We have SRT SMPTE 2110 receivers in our RX1. We can deploy that in the cloud.

“That means you can receive all your streams back to your remote production site – or at-home production as they call it in the US – and we have the encoders to be able to turn that around and distribute it out to the affiliates. And then finally there is the last-mile encoding through our DTH encoders with Mediakind Encoding Live: everything from the camera all the way to the end-user.

“And when you bring remote production into the picture you can start to see smaller, minority sports being able to produce relatively cost-effectively – which means you’ll be able to reach bigger and potentially very different audiences. It’s not just about the big sports and big players: you can start to bring in niche sports in a cost-effective way for the end-user, which is really exciting.

“We’ve touched on 5G in terms of delivery to the stadium. The other exciting area is 5G for backhaul, using that 5G link to get that data from the camera, which you can then make remote – giving you flexibility from the cameras back into the remote production system.

“5G enables you to have a single network that is covering the stadium, for all the users with their mobile phones, but setting aside a slice of that bandwidth specifically for your backhaul. Having guaranteed bandwidth gets you away from a lot of the bonded 4G-type issues that people see with mobile cameras. That could potentially feed into the way sport is produced,” said Baumann.