CP Communications returned to the annual All-Star Game this month for the 18th consecutive year, with an expanded RF transmission presence that stretched far beyond the core nine innings. 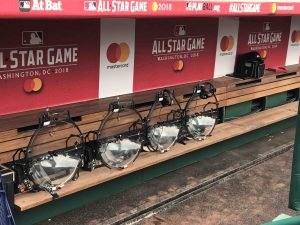 CP Communications this year brought a crew of 27 — its largest yet to support the All-Star Game, which brings together baseball’s greatest players from the National and American Leagues — and its RFHD7 53’ production truck to Nationals Park in Washington DC. The truck served as the central communications and distribution point for each client and system involved in the broadcasts and events.

As in past years, the CP Communications team once again expertly managed and coordinated all RF activities for the global All-Star Game, network studio shows, the Home Run Derby, and a Red Carpet Show. Additionally, and for the first time, CP Communications provided RF support for various digital and streaming productions. The company also provided a production kit for PLAY Ball Park, an adjacent venue that served a free interactive center during All-Star Week with baseball celebrity appearances, adult baseball and softball games, youth tournaments, batting cages, and more.

“The events surrounding the All-Star Game are different each year depending on each client’s needs, which results in strategic adjustments in crew and technology,” says Michael Mason, president of CP Communications. “With RFHD7 as our resource distribution center, our 27-member crew worked hard to meet intensive scheduling deadlines across multiple venues, and eliminate disruptions in the RF spectrum that would adversely affect signal quality. The latter included clearance of 420 RF frequencies for wireless communications alone.”

The technical infrastructure employed much of the same equipment as in previous years on a larger scale. However, CP Communications this year added a Pliant CrewCom intercom system for productions associated with the Home Run Derby, as well as All-Star Game ceremonies included the National Anthem, God Bless America, and the 7th Inning Stretch.

“The Pliant system enabled us to provide a much wider area of coverage,” says Mason. “The antennas in this system run data streams over Cat5, which gives it a lighter architecture that is very easy to deploy overall. We deployed antennas across several positions to maximize coverage, and even integrated all communications carried over Pliant with scoreboard control operations.” 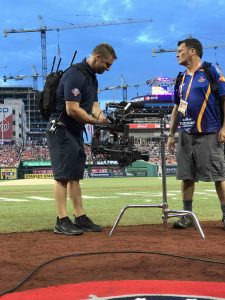 Other specific highlights of the RF transmission infrastructure include:

Beyond Dante, Mason and his team also employed MADI and analog audio networks depending on each client’s infrastructure. “By keeping everything in the digital realm as often as possible, we eliminate the problems that haunt analog audio such as cable management, power distribution, and hum and buzz, ” he says. “However, we’re always fully prepared to work with any client’s infrastructure across analog and digital.”