NAB 2016 in Review: Looking Through the Haze

NAB 2016 is in the books and, for the 103,000 people in attendance, it’s time to pull together notes taken from across the show floor and hopefully be able to answer a simple question from management: what was the big trend at the show this year? As is often the case with simple questions, there is a not-so-simple answer. Yes, there were clearly hot topics of discussion; most notably, the move to IP-based workflows and the promise of the various enhancements related to UHD. And then there were virtual reality (VR) camera, stitching, and production tools. 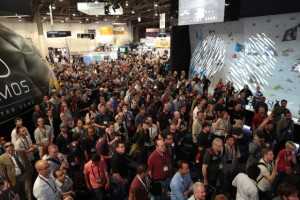 All of those subjects were definitely at the center of conversations at nearly every booth, as well as in the halls and sessions. But those conversations were often punctuated by words that are the mark of an industry still trying to figure out its next steps: Why? How? When?

Let’s start with what was definitely a unifying element of many of the technologies introduced this year: IP. Broadcasters and production professionals are definitely intrigued by the operational efficiencies to be gained by moving from traditional baseband signal transport via SDI to IP-based signal transport. So everyone heading to NAB definitely had at least a quick answer to the question of why make the move to IP. But the how and the when? Finding answers to those questions on the show floor proved a bit more difficult.

For example, investigating the move to IP also meant exploring two of the primary driving forces behind the move to video-over-IP transport: the ASPEN format, introduced by Evertz last NAB and now supported by more than 30 manufacturers, and AIMS (the Alliance for IP Media Solutions), which is also supported by more than 30 manufacturers. And investigating those two alliances introduces additional acronyms and standards. There are differences in the two camps and those differences, for now, defeat what many consider the key to moving to IP: freedom to move an IP signal anywhere to any device (from any manufacturer) and, hopefully, without any signal latency. There is little doubt that such a day will come, but at NAB 2016, it was still hard to see when and how that day will arrive.

Virtual reality (aka VR) also had its big moment at the show as there was a VR pavilion in North Hall and NextVR also had a presence in the outside exhibit area via its new production truck. The VR focus was clearly on camera systems with Nokia’s Ozo system (priced at $60,000) topping the list of most newsworthy 360 camera systems (with Disney also stepping up to purchase the system for use on VR content related to movies. The price tag may be steep compared to the numerous consumer-level VR camera systems but it is also designed to simplify the production and post-production process.

And then there was the UHD format, complete with increased resolution and expanded color gamut and dynamic range. Manufacturers certainly did their best to answer the question of how and when.

Let’s start with the imaging products and other production tools (most notably graphics and editing), as there was one main message: your next purchase will at least give you the power to produce content that looks better than ever for today’s HD needs and also provide a clear transitional path to next-generation UHD content creation.

But UHD, like IP, is suffering from similar questions of how and when. Yes, there are some UHD/4K services that are beginning to pop up around the world. But one of the major issues facing broad deployment of UHD services remains the inability of over-the-air TV stations and networks — most notably ABC, CBS, NBC, and Fox — to deliver UHD services over the air. The ATSC 3.0 standard will solve those issues but it looks like it will be late 2017, 2018, or later before broadcasters interested in next-generation services can make them a reality.

Leaving delivery aside the biggest issue is that today’s sports broadcasters want to make the move to UHD without compromising the production workflows they have in HD. That is no simple task to solve and will most likely not be a reality until NAB 2018.

And then there is the question of a UHD return on investment. Will there be additional advertising dollars? Will it offer broadcasters a competitive advantage vs. upstart OTT services? And will a younger generation growing up accustomed to consuming content on devices that make it difficult to see the full benefits of UHD see a benefit in UHD?

It’s that last question that had plenty of people at the show buzzing about HDR and expanded color gamut. The new mantra with respect to next-generation services seems to be this: 4K resolution is great, but most consumers cannot tell the difference given the viewing distances in their living rooms. HDR, however, is something the vast majority of consumers can see immediately.

NAB 2016 will most likely not be remembered as a watershed year for the industry. This year marked my 26th consecutive NAB, stretching all the way back to 1991. Searching through my NAB vaults, this year’s show reminded me very much of the NABs in the late 1990s when the transition to HD was beginning. But there was one tremendously important difference this year compared to the future offered at those shows. Everyone who was there then can remember HD World located in the Hilton. It was an exhibition featuring $200,000 HD cameras and $300,000 HD recording decks that left many local TV station executives wandering through it muttering things like “HD news will never become a reality.”

Even the most cynical of NAB attendees sees a future that involves the delivery of stunning images to viewers and IP-based workflows that allow for a whole new way of operating. And then there is the new concept of virtualization for the broadcast industry and the possibility that the industry becomes more reliant on purchasing software tools and subscriptions rather than dedicated hardware for dedicated applications.

So everyone can see the what and — in some respects — the why of a UHD and IP future. The question for next NAB will be how much closer the industry can get to the how and the when. There is still a tremendous amount of engineering, standards development, and testing to be done. But one thing is certain: when the industry gets a clear answer to the how, the when will follow very quickly.