The challenge posed by SporTV to broadcast the Rio 2016 Olympic Games resulted in unprecedented coverage aired globally on TV and impressive figures that reflected the success achieved. With 16 commented and narrated channels on Brazilian pay-TV and 56 internet broadcasted channels, more than 4,000 hours were broadcasted.

A project that had the involvement of 1,591 professionals willing to prove that the dream of broadcasting 100% of the Olympic Games is possible. 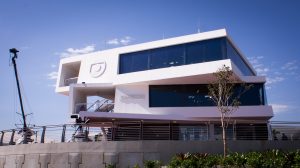 The studio inside Olympic Park, built by TV Globo and Globosat’s SporTV

In just 17 days of the Rio Olympic Games, SporTV channels reached 38 million viewers. This number represents an increase of 29% more viewers compared to the 2012 London Olympics. The channels also led the audience with a range of 27% greater than the sum of all the SportsChannels competitors.

“The Games were a landmark in terms of production, transmission, and technology compared with all the previous games,” says Bianca Maksud, Globosat SportsChannels Marketing and Product Director. “SporTV broadcasted 100% of all live competitions among 56 internet channels, being 16 of them on TV. This has never been done before at a sporting event. We are very proud to have provided this kind of innovation to sports lovers.”

The challenge to produce the program was great: “We did not want people just to make comments on the records and results. We wanted the legends of sports,” says Raul Costa Jr., SporTV Programming Director. “In addition to the hard work on closing these guests participation agreements, we had a team mobilized especially to ensure that they were happy during their trip to Brazil.”

The SporTVChannels coverage in the biggest sporting event on the planet had the use of three new studios: the Olympic Studio, in partnership with Globo Group, one on Abelardo Bueno Avenue having the Olympic Park as a backdrop and the other one at the channels own headquarter. The team worked hard to make sure the games were aired in the house of subscribers, mainly through SporTV Play and SporTV Rio2016 apps.

The investments in technology have also allowed the SporTV coverage to be seen in a wide variety of electronic devices. In addition to the 56 channels available online, with live content and also on demand — that could be watched on smartphones, tablets, computers, game consoles, and smart TVs — broadcasting was in 4K technology (ultra high definition) and also in virtual reality (VR), developed in partnership with Samsung.

The games were on just for a few days, but the SporTV 2016 app was one of the most downloaded, having 1.1 million downloads. Having access to all SporTV channels, apps had 6.8 million hours via live streaming, including tablets, smartphones, and laptops.

Roberto Primo, the chief information officer of Globosat says, “These are the games where the state of the art technology converges with television. I think IPTV started a virtuous cycle that will put more and more users in a position of the master of experience, where every detail will contribute to amplify the pleasure of watching the games and being moved.”

Having the positive feedback after such planning and boldness, SporTV evaluates that the channel’s brand finished the event even stronger and more consolidated as a reference in all sports. The amount of positive posts in social media reinforces this analysis, which is complemented by the importance of partners and sponsors support.

“In order to carry out a project of such dimension, it was essential to have the partnership with our sponsors and also the pay-TV carriers,” says Bianca Maksud, Globosat SportsChannels Marketing and Product Director. “Two years ago, we introduced the idea of the 16 channels and some other projects to the market, which was part of our idea of coverage and, we received the support of our advertisers. Similarly, we also have been “embraced” with the carriers’ support. Even facing satellite limitations, they accepted the risk and worked hard to take those 16 channels to subscribers. In addition, the energy that moved the whole team of over 1,500 professionals in those transmissions and internal synergy throughout Globosat were the key to the excellent results achieved.”