Cobalt Digital has launched its 9905-MPX up/down/cross converter that can handle 3G, HD, and quad SDI. The next-generation advanced scaler/frame synchronizer for the openGear platform was developed in direct response to customer requests for one module that supports four independent signal paths. 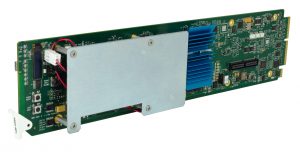 “Cobalt has been building products since 1997 based not only on current industry demand, but also by anticipating requirements driven by emerging technologies,” says Chris Shaw, Cobalt’s Senior Vice President of sales and marketing.  “This time the customers asked for increased density, unprecedented multi-input support, and enhanced flexibility, and we happily complied with the 9905-MPx.”

Based on the architecture of Cobalt’s 9904-UDX, the 9905-MPx incorporates many of the award-winning card’s capabilities (such as support for all popular formats: 480i, 576i, 720p, 1080i, 1080pSF, 1080p) but features functionality that sets it apart from any other up/down/cross converter/frame sync/embed/de-embed audio processor on the market. The 9905-MPx provides four independent signal paths of UDX/frame sync/audio embedding and de-embedding on a single openGear card. This multi-path design offers four channels per card with flexible AES and MADI embed/de-embed for each path. When used with Cobalt’s HPF-9000 20-slot chassis, this provides up to 24 channels (6 cards) of processing in a single frame, representing a new level of openGear packaging density and resulting in unprecedented multi-input support and flexibility.

The unit’s independent up/down/cross convert scalers are specifically designed for broadcast video formats, with full ARC control suitable for conversions to or from 4:3 and 16:9 aspect ratios. Discrete AES and MADI audio embedding/routing/mixing/de-embedding to any of four processing paths is supported. Color correction and 3D LUT functions provide accommodation of SDR and HDR processing for downstream HDR systems.

Card control/monitoring is available via a DashBoard user interface or Cobalt’s RESTful-based Reflex protocol. The 9905-MPx can be software-converted to a 4K Quad-Link Input SDM/2SI 4K UDX/Frame Sync card with an optional software license.

Like many Cobalt cards, the 9905-MPx has a five-year warranty.