With the dust still settling on the 54th Super Bowl that took place in Miami Gardens last weekend, Ross creative and technical personnel and partners Van Wagner Sports & Entertainment are reflecting on their work powering the game-day experience that entertained fans fortunate enough to have had tickets for the Hard Rock Stadium. 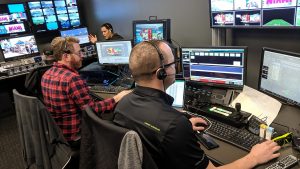 For this year’s event, additional Ross solutions were added to the production, including the XPression real-time Augmented Reality (AR) system, to display scoring drive summaries and in-game player statistics, and the Piero Sports Analysis tool, that uses image recognition or encoded camera lens/head data to overlay tactical graphics on sports content to create visually engaging and informative effects for the fans attending the game.

Commenting on the production horsepower deployed for this year’s game, Kevin Cottam, Ross Video’s Director of Sports & Live Events, highlights the importance of giving the fans in the stadium an experience to remember.

“Last weekend’s game was one of the world’s most widely-viewed sporting events, and everyone involved wanted to ensure that the fans were entertained and engaged,” he says. “We’ve partnered with Van Wagner Sports & Entertainment on a number of high-profile sports productions over the years and this was our 4th Super Bowl working together, so we were confident we would entertain fans throughout the game”.