With almost half the world’s population tuning in to the 2018 world football event, high-resolution and reliable, live video of the games was critical to broadcasters throughout the globe. Some of the worlds’ premier public broadcasters trusted FOR-A to deliver pristine imagery in a multitude of formats to fervent fans watching the quadrennial event. 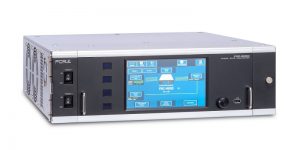 A premier Japanese broadcaster went with six FRC-9000 4K/HD frame rate converters for HD and SD signal conversion for error-free live broadcasts of the month-long contest from Russian to its viewership in Japan.

“This is the ultimate test for our frame rate conversion technology,” says Mr. Takaaki Imoto, Senior General Manager of FOR-A Overseas Sales & Marketing Division. “The world football event is one of the most prestigious sporting events covered by broadcasters all over the world. There are many conversions that must be done live to get the properly formatted signals to their destination. It’s a complex task that FOR-A makes look easy for our customers. We congratulate these broadcasters for their spectacular world football event coverage.”