How Different Is 3D?

When you watch a televised advertisement for an automobile, do you fear there’s a moving car in the room with you? I didn’t think so. But more on that later.

This post is about human perception of 3D imagery. It’s also about how we see moving images in general and about color, sound, carsickness, and the idea of smashing open a TV set with a hammer to allow the tiny people inside to be seen more clearly.

That last suggestion probably first appeared in 1961 in an age-inappropriate alphabet tome called Uncle Shelby’s ABZ Book, written by Shel Silverstein. In it, T was for TV. The book indicated that small performing elves lived inside the television set and an adventurous child reader using a hammer to break open the tube “will see the funny little elves.”

That same year, Colin M. Turnbull of the American Museum of Natural History published “Some observations regarding the experiences and behavior of the BaMbuti Pygmies” in the American Journal of Psychology. One of the observations seems related to those little elves in the television set.

“As we turned to get back in the car, Kenge looked over the plains and down to where a herd of about a hundred buffalo were grazing some miles away. He asked me what kind of insects they were, and I told him they were buffalo, twice as big as the forest buffalo known to him. He laughed loudly and told me not to tell such stupid stories and asked me again what kind of insects they were. He then talked to himself, for want of more intelligent company, and tried to liken the buffalo to the various beetles and ants with which he was familiar.” http://www.wadsworth.com/psychology_d/templates/student_resources/0155060678_rathus/ps/ps06.html

Those of us who grew up with television and open spaces might find both stories equally ludicrous. We know the people we see on a TV screen are full size (and don’t live inside the television set) and so are distant animals. But why do we know that?

Based on the angles their images form on our retinas, we should think the people we see on a small TV screen are tiny. We don’t only because we’ve learned what TV is. Kenge, a life-long forest dweller, had never been exposed to distant vision, so he’d never learned how small things might look when viewed from far away. 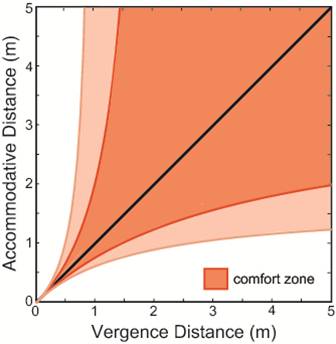 What does that have to do with 3D? Take a look at the diagram at the left. It was created by Professor Martin Banks of the Visual Space Perception Laboratory at the University of California – Berkeley. The vertical axis represents viewing distance from a movie or TV screen, the “accommodation” or eye’s-lens focusing distance. The horizontal axis represents the depth within a stereoscopic 3D image where something appears to be, the “vergence” or “convergence” distance, the distance to which the two eyes point (“vergence” is used because eyes can both converge and diverge).

The dark-colored area represents a comfortable viewing zone — a depth range where 3D viewing should not make viewers feel sick. The lighter-colored area represents a potentially uncomfortable “fusion” zone, where viewers can combine the two eye views into a single object or character, though they might not like doing so. Outside that zone, even fusing the two images into one can be a problem.

There’s an easy solution to the problem, one put forth in the white paper “3D in the Home.” It was previously available on the web site of the 3D company In-Three. http://in-three.com/

In accordance with the comfort-zone plotted above, the In-Three white paper said depth could extend to an infinite distance behind the screen for movie-auditorium viewing, with restriction only for imagery extending in front of the screen. As shown in the diagram at right, however, for a home-theater viewing distance of six feet, the white paper suggested restricting depth behind the screen to just four feet and depth in front of the screen to less than two feet. That depth range, too, seems well within the vergence-accommodation comfort zone.

It might be possible to restrict shooting to that depth range in a talking-heads-style public-affairs discussion. But that’s an extremely limited range.

It’s unlikely to be sufficient even for a variety or reality show, let alone for most sports. Two football players standing side-by-side perpendicularly to the camera might exceed the range all by themselves.

Another alternative, therefore, is to shoot the natural scene depth but adjust homologous points in the two eye views so that the depth presented on a home display does not stray beyond the comfort zone. Unfortunately, the shrunken depth might cause those football players to be perceived as being tiny, like the supposed buffalo insects or mythical TV-set elves. 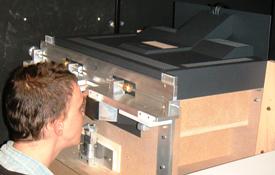 Professor Banks is well qualified to discuss discomfort associated with viewing stereoscopic imagery. He designed an impeccable experiment that proved that a vergence-accommodation conflict could cause discomfort (one experimental subject even aborted the sequence due to extreme queasiness). At right a subject bites a bar to ensure accurate distance measurements. But Banks was by no means the first person to note the consequences of a vergence-accommodation (V-A) conflict.

The zone of comfort is often called Percival’s zone in honor of Archibald Percival, who published “The Relation of Convergence to Accommodation and Its Practical Bearing” in Ophthalmic Review in 1892 (and even in that paper, Percival attributed ideas to prior work published by Franciscus Donders in 1864). The reason eye doctors have been concerned about V-A conflict relates, in part, to eyeglasses. If you wear them, you might have noticed a queasy feeling when you put on your first pair or when there was a substantial change in the prescription. But that feeling probably faded as you became accustomed to the V-A conflict. 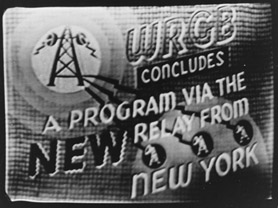 Another group that was interested in V-A conflict was the original National Television System Committee (NTSC), which began meeting in 1940, the year this off-screen photo was taken. WRGB was named in honor of Dr. Walter Ransom Gail Baker, the engineer who became the head of the NTSC (the initials also stand for white-red-green-blue color systems).

The first NTSC came up with the standard for American black-&-white television, but they were also concerned about color. One of their concerns was that simple lenses (like those in our eyes) cannot focus red and blue in the same place at the same time. The change in focus is a change in accommodation, potentially leading to a V-A conflict. In other words, color TV, in theory, could have made people sick.

In fact, the NTSC concluded that it wouldn’t, based on such work as a paper by Technicolor research director Leonard Troland published in the 1926 American Journal of Physiological Optics specifically related to color motion pictures and the V-A conflict.  But, even if color TV would have made viewers sick in 1926, would it always have done so?

Consider, for example, a short movie shot by the Lumiere brothers in 1895, L’arrivée d’un train en gare de La Ciotat (The Arrival of a Train at the Station of La Ciotat). The original looked a little better than what’s shown here, but it was black-&-white and silent. And it’s clear that the train is not heading straight towards the camera.

Nevertheless, here is a report (translated from the original French) from Henri de Parville, an audience member at an early screening. “One of my neighbors was so much captivated that she sprang to her feet… and waited until the car disappeared before she sat down again.” The same reaction was not reported from screenings of other movies, such as one of workers leaving the Lumiere factory. In other words, it seems as though the crude, silent, black-&-white movie made at least one audience member react as though there were a locomotive in the screening room. 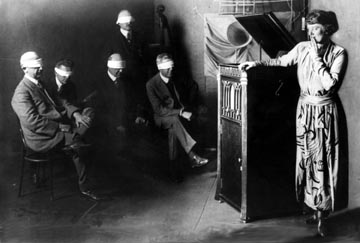 About a quarter-century later, Thomas Edison conducted what he called “tone tests,” at which audience members were blindfolded or placed in a dark room and asked if they could tell the difference between a live opera singer and a mechanical phonograph recording of one. Here’s a contemporary account from the Pittsburgh Post in 1919 about a test conducted at a concert hall. “It did not seem difficult to determine in the dark when the singer sang and when she did not. The writer himself was pretty sure about it until the lights were turned on again and it was discovered that [the singer] was not on the stage at all and that the new Edison [phonograph] alone had been heard.”

It might seem ridiculous to readers today that a viewer could be scared by a silent, black-&-white movie of a train or that a listener couldn’t tell the difference between a live singer and a mechanical recording of one (in fairness, I should point out that one of the singers revealed, many years later, that she’d taught herself to sound like a phonograph recording). But that’s because we’ve learned to perceive the differences between those recordings and reality.

There are many examples of such perception education. You might have outgrown your childhood carsickness, for example, just as sailors get over seasickness.

There are two pages of health warnings in the manuals of Samsung 3DTVs, and at least some of them may be very well justified by such issues as the vergence-accommodation conflict.  But that doesn’t mean viewers will always have problems watching 3DTV.