Bang for the Buck: Data Rate vs. Perception in UHD Production

Going beyond today’s television could involve higher resolution, higher frame rate, higher dynamic range, wider color gamut, stereoscopic 3D, and immersive sound. Do all provide the same sensation of improvement? Could some preclude the use of others? Which delivers the biggest “bang for the buck,” and how do we know? 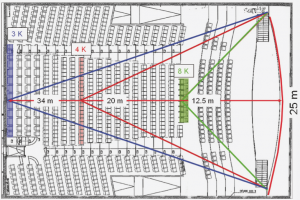 Mark Schubin adds: “I neglected to describe all of the images on slide 19. The upper right image shows that, in a cinema auditorium, detail resolutions beyond HD might be visible to everyone in the audience, even in the last row. The ARRI Alexa camera, from the same company that provided that image, however, has only 2880 pixels across — less than “3k.” That hasn’t stopped it from being used in major motion pictures, such as Skyfall (shown on set in the left bottom image) or the top-grossing movie to date in 2013, Iron Man 3.”

All recent downloads can be found in the main column on the left.Schubin Cafe: Cinema Yesterday, Today, and Tomorrow