After more than 20 years in downtown St. Louis, Scottrade Center has firmly established itself as a world-class destination for St. Louis Blues fans and concert-goers alike. But, with an all-analog control room and standard-definition video displays, the arena required an upgrade to keep up with the product on the ice and stage — and with NHL fans’ game-day expectations. 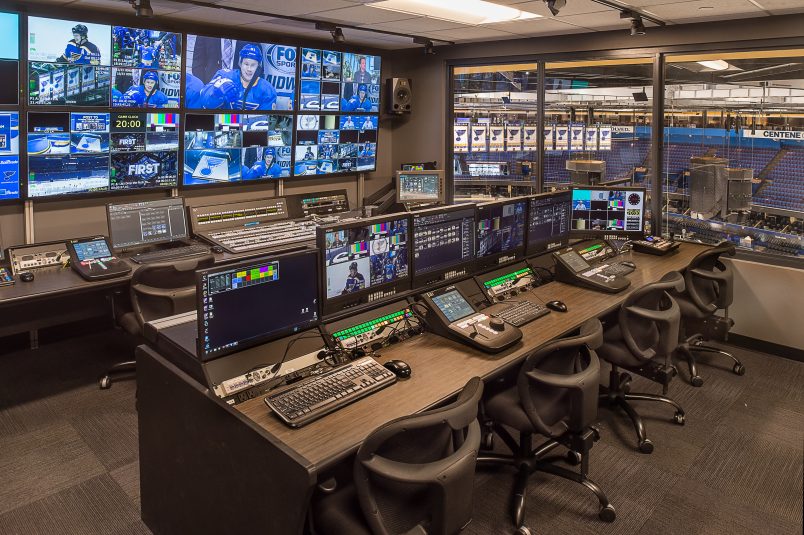 Located on the Penthouse level in the corner of the Scottrade Center, the video-control room features two large windows that allow staff members to witness the fans’ and players’ reacting to the experience.

Prior to the 2016-17 season, as part of a multimillion-dollar arena-wide renovation, Scottrade Center gutted its Penthouse-level control room, removing its analog equipment — much of which had been manufactured in the late 1980s and far surpassed life expectancy. Working with Diversified, consulting- and design-services provider Idibri, and Grass Valley, the Blues invested in a wealth of HD gear that would bring Scottrade Center into the 21st century.

“From the start, the team, management, fans, and even sponsors noticed the difference in quality of experience with the new video-control room,” says Chris Frome, senior director, event presentation, St. Louis Blues. “It has improved the arena experience and has given us the time and tools to create more quality content for arena visitors.”

“It was time for them to make the substantial leap from an older, SD room to a 1080p room, and enhance the fan experience overall,” says Tony Gaston, strategic account manager, stadiums and venues, Grass Valley. “The benefit of working with Grass Valley, I think, is the ‘single-hand-to-shake’ aspect of having such a broad production portfolio. Up and down the line, we had a solution for them, and then, working through Diversified, we’re able to come up with a solution that fit a very short time frame.”

Over this past summer, the Blues upgraded their videoboards and added a wide variety of Ross Video equipment to support the new displays. Two Ross Dual Channel XPression Studio Real-Time 3D graphic render engines were chosen for the production control room, and during the summer of 2017, the Blues added XPression Tessera to feed and manage pre-rendered, real-time 3D content throughout the facility.

“The ability to feed and control LED displays infinite resolutions with pre-rendered and real-time 3D content made XPression Tessera the perfect choice for the Blues display control system” says Kevin Cottam, Director of Sports & Live Events, Ross Video, as the center hung display is much greater than HD resolution.  Giving the game-day production staff the ability to output real-time content to all displays in the facility, saves hours of design and render time and allows them to change content on the fly to output on any display in seconds. The team also chose the Ross DashBoard control system to incorporate display control with other production elements such as LED house and accent lighting. Combining the Tessera system with DashBoard control allows end users to trigger most any device in the arena (LED lighting, ice projection, etc.), enabling the production team to trigger multiple elements/devices frame accurately.

“After experiencing the power of the XPression system in the control room for a season, we decided to add a powerhouse of Ross XPressions to drive the content to the displays without any noticeable latency,” notes Frome.

For the videoboards, the Blues worked with Mitsubishi Electric to transform the centerhung display at Scottrade Center from one of the NHL’s smallest to the one of the league’s five largest. The new centerhung features four 30- x 22-ft. 4-mm displays, with a 6-mm upper-ring display, 6-mm bottom-ring display, four 6-mm corner-wedge displays, and two 4-mm underbelly displays. Mitsubishi Electric also designed and installed LED displays throughout the bowl, including a 10-mm lower-fascia display and 6-mm vomitory displays at every entrance.

To create content for the numerous new video displays, the Blues employ a team of eight full-time producers, editors, and motion designers; the full-time producers are responsible for the in-game production, while union technicians operate the equipment. The content itself is a mixture of features and elements dedicated to highlighting individual players, providing support for the team, and tapping into Blues fans’ pride in their city. Frome plans to sync the video elements with the arena’s new sound system and LED lighting system for a truly engaging, immersive fan experience.

“We do some very entertaining interactive features that we want to engage the fans,” says Frome. “That’s our philosophy: engage the fans, get personal with the players, and, of course, your standard stats. … I think they’re [really] going to see the new videoboard. That’s going to be the biggest wow [this season].”