ESPN Shakes Up NBA, College-Basketball Crews for ‘The Crossover’

Producers, analysts, commentators will step out of their bailiwick 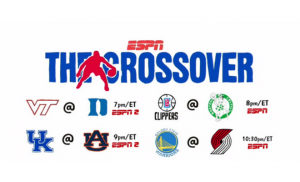 ESPN is playing matchmaker this Valentine’s Day, pairing NBA and college-basketball commentators and production crews for tonight’s hoops doubleheaders on ESPN and ESPN2. The Crossover, which debuted in 2014, will see longtime college-basketball and NBA analysts — and producers — swap properties to offer each of tonight’s four games a fun, fresh perspective.

For Pac-12 basketball producer Tim Sullivan, the opportunity to call the shots for tonight’s Portland Trail Blazers vs. Golden State Warriors was too great to pass up. NBA play-by-play commentator Dave Pasch and analyst Doris Burke will be joined in the booth by college-basketball analyst — and former Trail Blazer — Bill Walton; Cassidy Hubbarth will report from the sidelines. Sitting at the front bench inside Game Creek Video Glory, Sullivan will be ready.

“At the end of the day, it’s a live game broadcast, so the way I would prepare for college basketball, I’ve prepared the same way for this NBA Crossover game,” explains Sullivan. “The production support for an NBA game is a little greater — you have a few more resources at your fingertips – but, quite honestly, from my perspective, it’s finding the best stories and bringing those to life on the air.

“And, certainly,” he continues, involving the strength of your analysts — in this case, Doris Burke and Bill Walton. That combination, I think, is going to be really entertaining to watch. I’m looking forward to that.”

Tonight in Portland, Sullivan will have at least a dozen cameras at his disposal, up from the four or five typically deployed on a Pac-12 broadcast. The number of replay sources will increase significantly as well. “That makes my job more interesting,” he says, “and will certainly enhance our coverage.”

Sullivan is also prepared for the differences between the college and the professional game. In addition to the pace being quite different, the format of the game — two halves in college vs. four quarters in the NBA — requires an adjustment to how the game is produced.

“From a production standpoint, you have to tweak your formula a little bit,” says Sullivan. “A college-basketball game is a slower-paced game; it’s two 20-minute halves. For the NBA, it’s four quarters, so there’s a little tweaking of your production elements, where you place them. The biggest thing will be the pace of the game and in trying to make sure that we highlight the stars. But, again, that approach is what we do. We find the best stories and present them in the most entertaining fashion.”

Prior to the Trail Blazers-Warriors game, which tips off at 10:30 p.m. ET, the Boston Celtics take on the Los Angeles Clippers at 8:00 p.m. on ESPN.

On ESPN2, Mark Jones will handle play-by-play duties for Duke vs. Virginia Tech at 7:00 p.m. alongside analysts Jay Bilas and Hubie Brown, with sideline reporter Allison Williams. Phil Dean, who produced college basketball and Women’s Final Four before moving to the NBA, will handle front-bench duties in Durham. Immediately afterward, on ESPN2 at 9:00 p.m., Adam Amin will be on the call for Auburn vs. Kentucky, joined by P.J. Carlisimo, Dan Dakich, and Laura Rutledge.