The story of the weather outside the Microsoft Conference Center on March 7 was one of cold and bluster, but the yarn that the team from HBO Sports, Troika, and Man Made Music was spinning inside during an afternoon case study was one of embracing HBO’s legacy as a storytelling network, by telling the story of the boxer as well as HBO’s role in the history of boxing.

In the mind of HBO Sports Creative Director Christian Winters, the team had a duty not only to continue to tell the story of HBO Boxing but to refine and streamline it to flow seamlessly with HBO’s signature Sunday-night programming. 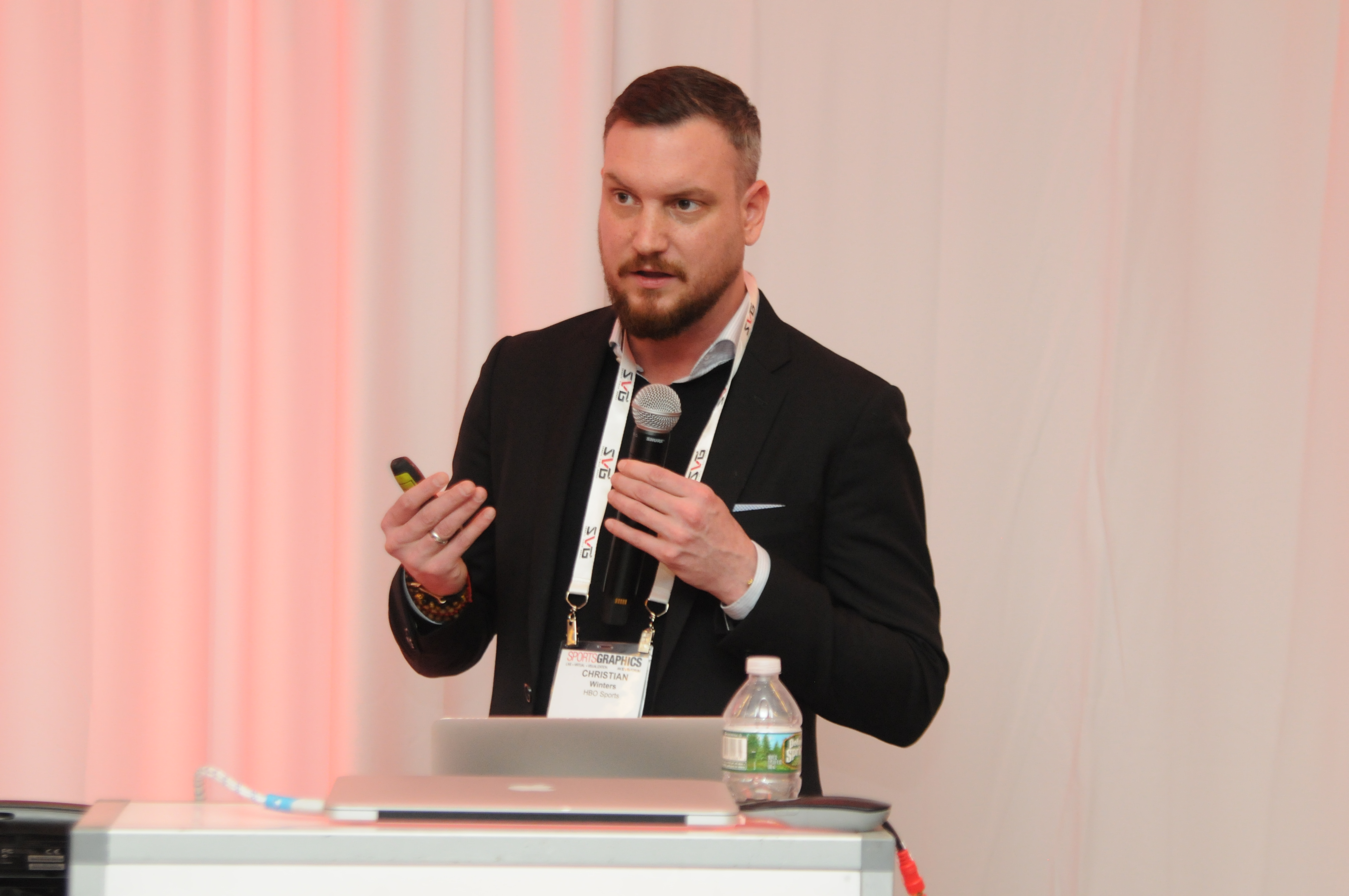 HBO Sports’ Christian Winters: “The goal [of the rebrand] was to take us to another level and elevate and refine the look of HBO Boxing.”

“We wanted to bring in new music, new graphics, new show opens not only to freshen the telecast but also help us get towards what we consider our greater goal,” said Winters. “The last boxing rebrand took our ideas and our properties and gave it a uniform look, a sort of linear story. For this one, the goal was to evolve that story and take us to another level and elevate and refine the look of HBO Boxing.

“We wanted to focus on simplicity and sophistication,” he continued, “which are the characteristics that are intrinsic to HBO’s signature programming. In short, we wanted to bring Sunday night to Saturday night.”

The idea of bringing the Sunday-night look and feel to Saturday night was the all-spark when it came to how the rebranding was going to go. The first focus of the rebranding was an updating of the HBO Boxing theme music. Working with Man Made Music, the team decided on a reworking of the original them and giving it a freshening up.

“We knew that we had a similar goal in that we wanted to take our original theme and sort of bring it up into the modern era, and the best way we found to do that is to focus on epic orchestral scoring,” said Winters. “We got to work on live instrumentation, and we got to create a really lush, multilayered arrangement. It was a really rewarding experience to take what is a signature sound for HBO and bring it into a broader, greater spectrum.”

The nest portion of the rebranding was focused on the graphics. According to Winters, the challenge was coming up with a graphics package that not only served the audience for HBO boxing but also fit in with the broader entertainment mindset that HBO is known for.

“The goal is to create a look that’s a little bit different from the rest of the sports landscape,” said Winters. “We’re not a 24-hour sports network; we’re a premium entertainment network, and most of our sports programming is really storytelling-driven type of programming. We created a package that carries the inspiration from the championship sports but also infuses the style that you’d see in the Sunday Times Magazine or the New Yorker.”

For the new opens to two properties, Boxing After Dark: Latino and World Championship Boxing, HBO wanted to focus on the type of boxer who would appear on the shows. For Boxing After Dark: Latino, it was about telling the story of the fighter on the rise; for World Championship Boxing, the focus would be on the iconic history of per-per-view boxing on HBO.

“For Boxing After Dark: Latino, we wanted to speak to tell that story of the contender,” said Winters. “We wanted to speak to the aspiration and really the payoff where reaching an HBO telecast is a major milestone in someone’s career. This one is very much focused on the individual; it’s a little bit smaller, a little bit more intimate, and tells more of a humble, grass-roots growing story.

“On the flip side,” he continued, “we wanted to tell the story of the icon, the greatest of all time, the champions whose names resound from decades past, where their peak activity was. For the WBC on pay-per-view, we wanted to delve into HBO’s rich history in the sport, the cultural impact that HBO boxing has had on so many boxing fans and audiences from all walks of life.”

When looking for inspiration for the new opens, Winters noted that the team looked to companies like Nike and Adidas and the commercial storytelling that they were doing, telling the story of the athlete.

“We looked across the television landscape for things that were inspiring to us and looked at show opens as much as we were looking at the commercial landscape,  [including] long-form pieces that Adidas and Nike were doing that were telling a story and bringing the audience into a more conducive experience,” said Winters. “We figured that we could craft a storyline that we could rely on our in-house resources — our natural storytelling capabilities — and put something together that would have the connection that we are looking for but in a world that we could sort of operate in. In doing so, we sort of defined what the narrative goals for the two opens would be.”

To achieve the desired realism for the two show opens, the team reached out to legendary fighters and boxing fixtures like Roy Jones Jr. and Michael Buffer while also seeking out actors who had actual boxing experience.

“We reached out to legendary fighters, not only getting their sign-off on likeness rights [but having] some of them participate as actors. We also cast athletes as actors,” explained Winters. “All of these guys had boxing experience, so, when we put them through the rigmarole of the shooting that we did, they were reacting. We wanted everything as best as we could do to count.”

According to Winters, there was no green-screen work used at all during the shooting of the opens; instead, the team relied on set design, wardrobe, and locations in order to give the photo-realistic feel that they were looking for.

“We shot over five days in Los Angeles and one day in Las Vegas,” said Winters. “The teams created spaces and wardrobes that gave the actors just an absolute embarrassment of riches to work with to pull into the characters and bring the production into reality. We didn’t shoot a thing of green screen. We shot everything we could, so we could bring the photo-realistic element to life. We wanted to explore what we wanted to do in a realistic setting, with as much photo-realism as possible.”

The final product was, for Winters and the team at HBO, one that was tough at times but, in the end, was both rewarding and in line with the rest of HBO’s properties.

“We definitely approached this in a new way, and it’s been some of the most rewarding problem-solving that we’ve attacked in our careers,” said Winters. “I really do believe that the work speaks for itself and stands on its own as something that does what our mission does, which was to tell a story and to fit in the mold of what we expect from a HBO broadcast.”