Market growth is driven by loudspeaker manufacturers and software producers

A great speaker can quickly become a mediocre one when placed in an especially challenging space. The audio compartment of a production truck is the ultimate Petrie dish for this phenomenon, one that becomes even more complex when audio mixes have to move between different spaces and through an assortment of different speakers.

In response, speaker manufacturers have been developing and refining so-called room-correction systems: software that can aurally analyze a particular space’s metrics, such as its size and reflectivity, and adjust performance of the speakers to that environment.

The market for these has grown nearly exponentially in recent years, driven by software developers joining the loudspeaker makers. Top-ten (and top 11) lists of them have become common.

Various brands have developed these room-correction products. Some began by focusing on LFE correction — for instance, JBL’s Intonato 24 system works solely below 500 Hz — but all are designed to optimize frequency response to those of the spaces they’re used in.

Although speaker-calibration solutions have their differences, they all need a point of reference in order to function. This takes the form of a measurement process that captures a snapshot of monitor performance from a listening position based on several swept-tone passes. The resulting profiles from this process, along with a predetermined target curve (that is, a “flat” or ideal frequency response), are the two main components of speaker calibration. The effects of these two curves result in what are called after curves, which compensate tonal issues using EQ within each monitor channel but also work to improve the phase relationship between monitors, as well as improving stereo and multichannel imaging.

Housed in a 2RU rack-mount enclosure, JBL’s Intonato 24 monitor-management–tuning system calibrates and controls up to 24 speakers configured as stereo, surround, or immersive audio systems. Though intended to be used with JBL’s 7 Series master reference monitors, Intonato 24 is also compatible with other monitors; additionally, Harman’s BLUlink network protocol allows Intonato 24 to be digitally networked with Harman’s Crown power amplifiers. It features internal routing and a mixer to provide monitoring flexibility for a combination of up to 24 analog and digital sources, which can be patched, routed, and selectively monitored via any of the connected speaker or headphone systems. Up to four subwoofers can be assigned as bass-management subs with selectable crossover settings, and the same or different subwoofers can be used to reproduce the LFE channel. Complete configurations — speaker-setup parameters, EQ, subwoofer settings, input-source patching, down-mix preferences — can be stored as profiles and scenes and instantly recalled, even mid-session.

“The room really doesn’t create problems for monitors above 500 Hz,” notes Chris Hansen, director, recording, broadcast, and content creation, Harman Professional. “Low frequencies are where the room tends to be in control. If you can solve the low-frequency–management issues, then you’ve resolved most of your room-correction problems. That’s what Intonato 24 does.” 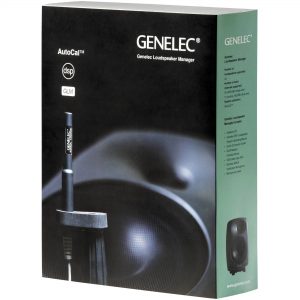 The complete GLM control system includes a Genelec measurement microphone and universal microphone holder, a network adapter unit, and the GLM software. The GLM software, available for both Windows and Mac, features level adjustment, distance delays, and flexible room-response compensation equalization using Genelec’s proprietary AutoCal automated calibration system. All parameters and settings are stored in system-setup files or saved in the individual studio monitor or subwoofer, in case the GLM network needs to be disconnected.

(Genelec’s new G LearningLab educational program is slated to kick off this month with a series of tutorials focusing exclusively on the company’s GLM loudspeaker-manager software. The training sessions will also be used to unveil GLM 4, the newest version of the software, which is currently in a public beta-test phase.)

Neumann’s new Neumann.Control iPad app is a DSP package capable of in-room acoustic correction, using eight bands of parametric (IIR) EQ to adapt Neumann’s KH 80 DSP loudspeaker to the individual room situation. A patented “Guided Alignment” algorithm enables filtering functions and room-adjustment options that adapt the system to its environment. The system can accommodate monitoring configurations from mono to 9.1 surround and can self-identify all loudspeakers on a network.

The Guided Alignment process takes the user through a set of simple questions about the room and the loudspeaker/subwoofer position; the app then adjusts the response of each loudspeaker/subwoofer accordingly. The iPad pairing, connected via a standard IP network with an Ethernet cable between the router and the monitor, offers features including switching between different setups and alignments, volume control, saving and recalling volume presets, dim, solo, mute, and mute all.

Not every speaker manufacturer is emphasizing automation of near-field monitoring environments, however. Although Meyer Sound’s MAPP XT predictive software and SIM system analyzer are scalable to a near-field environment, Meyer Director, Business Development, John Monitto says the company prefers it to be used to guide users to manually tune monitors to a listening environment, versus letting software do it automatically. Autonomous systems, he cautions, can potentially mistake reflections for source sounds, inadvertently applying inappropriate EQ and other processing.

“There’s the potential for making the situation you’re trying to correct worse,” he says. “We’d rather provide education on how best to use these types of tools.” 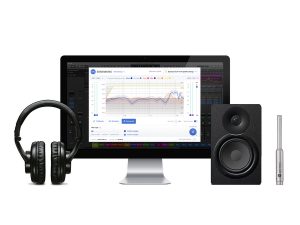 Another new class of monitoring-environment–management product adds headphones to the mix. Reference 4 from Sonarworks, which has been aggressive in this new category, combines sound-calibration software and a measurement microphone into a package that can establish consistently flat frequency response between any brand of speakers and headphones. Headphone calibration is done using a pre-measured profile created at Sonarworks’ facility in Riga, Latvia: users simply select the make and model — the company has encoded more than 240 models so far — and the calibration profile is set. Speaker calibration is done by the user with the Sonarworks microphone and measurement software, which captures sound from 37 data-source points and follows a similar process as most other speaker-calibration products.

What’s different here is that Sonarworks SR is designed to align transducers with a common audio-reference parameter that the company has developed, based on patented — and proprietary — sound-measurement technology and DSP. In a broadcast industry that historically looks to organizations like AES, SMPTE, and ISO to establish absolute standards, that could be a point of contention. Sonarworks President Martin Popelis notes that the company is “seeking ways to expand it to be a universal standard for audio.”

Collectively, these DSP systems will likely prove their value as more sports broadcasts move to the at-home/at-home model: remote productions whose endpoints might be in an A1’s basement or garage, propelled by a persistent pandemic that’s quickly making REMI production models the norm in many cases.

In the larger picture, as various flavors of surround audio become ubiquitous and immersive sound grows ever closer to becoming a broadcast standard, digital technology is in the process of remaking what a loudspeaker is, what it does, how it does it, and where it can do it. In the soon-to-be-world of 5.1+4 surround and then some, it’s perhaps not a moment too soon.