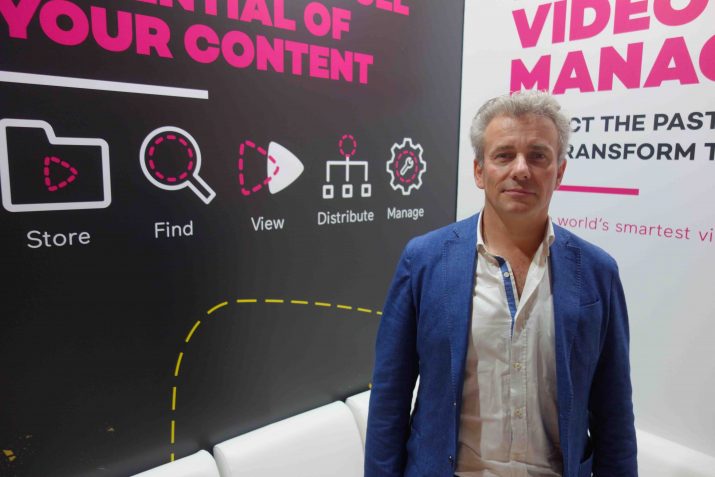 Charlie Horrell, Imagen chief executive officer, on the booth in Hall 14 at IBC 2019

In Hall 14 at IBC last month SVG Europe sat down with Imagen chief executive officer Charlie Horrell to discuss the growth of the company and how its product is being adopted by sporting organisations both large and small around the world. We began by looking at the drivers for the current growth being experienced by the company.

Charlie Horrell: “It’s a helpful combination of many things. The first thing is that the product we provide is mature and robust, and demonstrably so. We have, essentially, zero fear in having conversations with any business – but in particular sports businesses. So if you’re in the situation where you meet the needs of customers from the get-go, that’s a helpful place to be.

“The second thing is that part of our growth is in terms of resources, so we now have more people and we’ve got an office in the US. Conversations in the United States are now much easier. It’s an important market for us; we have eight customers there now. That provision of resources has helped us to grow. Chicken and egg.

“The third thing is that because we’re demonstrably working with some high profile sporting organisations, we’re able to point to successes and for others to mimic that.

“I’m sure you’re aware we do a lot of work with the Premier League. Well in this booth over the last couple of days have been their counterparts at all the other European leagues, who would like to look at something similar. If they can see it working for one, they want to replicate it.

“There are structural questions each of [the leagues] needs to solve, before they can adopt a solution like this. I think, frankly, it’s a matter of time rather than if. We don’t work with the Spanish, German or French leagues at present, for example, but would very much like to.

“The thing that’s interesting about a solution like ours is, essentially I never have a conversation that says ‘I don’t understand’ or ‘I don’t like’ or ‘I don’t want’. I have conversations along the lines of ‘OK, these things I need to be doing, how do I fit them into my priority list so that they can be solved today, rather than tomorrow?’”

How much of your current growth is ‘organic’, if you like? How much from existing customers increasing their engagement with Imagen?

“The ATP, for example, fairly recently started using us for live ingest of their matches. They use us for their archive, and now for live games. That’s an additional functionality we provide for them, and they choose to use it.

“We’re happy to have those conversations. I would say 80-85% of our growth is from new business rather than increased revenue from existing customers – essentially as we only sell one product. We don’t have a menu of products. They may have different usages of the product, which would lead to greater revenue, but of itself it’s not a multiplicity of solutions.”

To be honest, there are similar MAM/cloud/archive solutions being offered around the show floor here at IBC. So what makes Imagen different, or special?

Charlie Horrell: “What’s the secret sauce? Essentially our secret sauce is that we do one fairly narrow thing very well. We hold heavyweight archives at full resolution: that’s important as you’ve got no degradation of quality. What you put in you can then take out.

“We have a number of small tier 2 and 3 sports clients – weightlifting and curling being the two we name-check but there others out there – that are resource-strapped businesses but they still have assets they want to manage. They have no ability to manage these themselves, as they don’t have the technical infrastructure of some of the larger sporting organisations. The one product suits the needs of the tier 1 and tier 3.”

What about the danger, which applies to any MAM business, of becoming ‘bespoke’ for each customer?

Charlie Horrell: “No, we are a product-based business. We have a natural tension with larger clients who want to try to bend the product out of shape. We resist that pretty strongly.

“We’re prepared to alter our priorities to meet the needs of certain clients, but we’re not prepared to cross the rubicon and go against our religion – building elements into the product that would not be helpful in the future. It is a continual tension. We turn down work on that basis.”

How are meetings and discussions going here at the show? What’s the atmosphere on the booth this year?

I’ve written a board report for our next board meeting, and I’m looking at these metrics – and pretty much everything is 2x on last year. From my perspective that’s great; I can’t expect much more than that. Any more than that and our growth would be too fast; there would be growing pains.

“We’ve had to scale the team and put in a lot of people. We now employ many more people than we did last year. We took in a venture round in December last year, with investment money that enabled us to do this. So it’s a real balance: investment to grow, the growth comes and you then become even larger. It’s a virtuous process.”

Finally, everything we’ve discussed here suggests that, for the foreseeable future, Imagen should ‘stick to the knitting’?

Charlie Horrell: “I think that’s got to be the mantra of a business like ours. We are a mono-focused business as a media asset manager for heavyweight files. We are not trying to be a production asset manager, or an editing tool, or a content B to C distribution portal. Again, if you’re looking for that secret sauce, it is that relatively narrow focus that we do very well.

“The virtue of not having been bent out of shape is that the thing works well; it is not a dog’s dinner. There have been occasions where we’ve walked away, or we’ve made conditions sufficiently strong that in the end there’s been a mutual agreement that it’s not going to work. But what we’ve never done is accept a piece of work on which we can’t deliver.”