The number of Avid edit stations is tripled; new shot-selectors are added

With social media increasingly ubiquitous in the lives of Olympics fans, NBC’s Highlights Factory [HLF] operation has become more integral to the Peacock’s success, delivering hundreds of highlights to various social and web platforms throughout the Games. As a result, NBC continues to beef up the HLF operation in Stamford, CT, tripling the number of Avid edit workstations from Sochi, retaining the same number of intern loggers, and adding a new group of experienced shot-selectors to help identify key moments and clips.

“We are still producing highlights of all the big moments [during competition], but what we’ve added this year is a focus on the ancillary viral content that will really drive interest,” says Eric Hamilton, director, digital video production, NBC Olympics. “That defines our approach this year. Sometimes those are truly important things, and sometimes they’re just fun.” 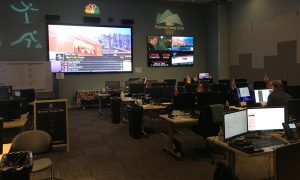 NBC Olympics has once again set up a dedicated area in Stamford for its Highlights Factory operation.

For example, a shot of a walkie-talkie rolling down a downhill slope as officials tried to catch it was spotted by one of the 23 interns at the HLF office, who raised a flag to notify a shot-selector (each logger is equipped with a different nation’s flag), and the clip was distributed across NBC Olympics’ social-media channels. The clip has become a viral sensation, generating millions of views. CLICK HERE for more on NBC’s social-media efforts for PyeongChang.

Of course, the HLF team isn’t all about runaway walkie-talkies; Hamilton and company still “make a lot of sausage,” as he puts it. The operation generates more than 130 highlight packages per day, using 12 preditors at Avid Media Composer workstations at any given moment.

“Since we are a digital [operation], we are able to pretty nimbly change things around, so the next Olympics always has something different,” says Hamilton. “Since we have more Avid workstations this year, we can cut everything live as it happens, which is different from the way we used to do it. 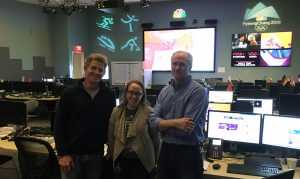 Eric Hamilton (far right) and his team at the Highlights Factory production area in Stamford.

HLF also has access to Haivison-encoded camera feeds delivered to Stamford, showing behind-the-scenes content outside of the competitions themselves. For example, when Czech Ester Ledecka pulled off one of the biggest alpine-skiing upsets in history by winning the gold in the Women’s Super G, HLF was able to capture the reaction of Anna Veith, who had been almost assured of winning gold prior to Ledecka’s shocking run.

“We take those cameras, and we’re looking at them all the time,” says Hamilton. “It could be a shot from the workout room at figure-skating practice or an iso of [Veith] as she watches her gold medal disappear. It can be pretty powerful stuff.”

The HLF operation has come a long way since its early beginnings in Saturday Night Live’s Studio 8H at 30 Rock for the Beijing, Vancouver, and London Games. For one, the Avid MAM system at the heart of the HLF operation has continued to evolve, growing exponentially — in both size and sophistication — with each Olympics. In addition, the number of camera angles the HLF team has access to continues to grow, opening up the boundaries of storytelling for digital outlets.

“There are always new camera angles, and we have the luxury of being able to use those to create something alongside the normal broadcast highlight,” says Hamilton. “We get to produce these alternate versions that show things from a different perspective. That is a big factor in how we amped up the Highlights Factory capabilities this time.”

This is Part 3 of SVG’s three-part series on NBC Olympics’ at-home operation in Stamford, CT. Be sure to check out Part 1, a look at the overall setup in Stamford; and Part 2, a look inside the 4K HDR and Dolby Atmos operation.